The Israeli right wing considers former Foreign Ministry Director Alon Liel a traitor for advocating to pressure the Israeli government and advance voting in the United Nations in favor of a Palestinian state. 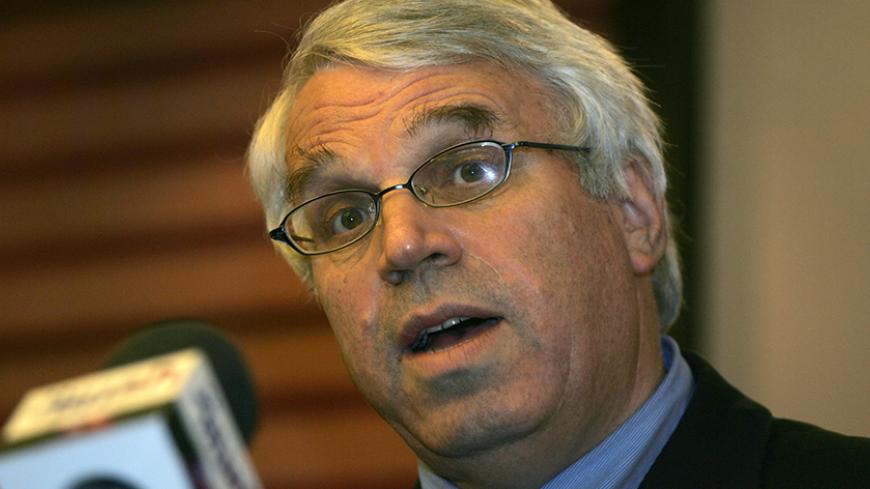 Israel’s “traitor” du jour is Alon Liel, the former director general of the Ministry of Foreign Affairs. On Jan. 12, right-wing activists disseminated an audiotape from a meeting between Liel and members of Breaking the Silence. In it, Liel is heard urging them to pressure United Nations member states to vote for a Palestinian state. He is also heard saying that he has given up hope that Israel’s political establishment could change the public’s mind-set and reinstate the idea of the two-state solution on the agenda. “The political establishment is lost — lost, especially now when there’s a consensual government, with all the apparatuses, with all the spokespeople, with all the growing control over the media,” Liel said, among other things.

The conclusion, according to him, is that human rights organizations need to be proactive, initiate a move and influence local public opinion as much as possible, but mainly public opinion around the world.

Liel’s associates claim that he has always expressed his opinions openly; they are even posted on his Facebook page. According to them, the only way — given the current political climate — to bring Israel back on track to recognize the two-state solution is by having the international community apply pressure on it. But amid a charged battle that the Israeli government and right-wing organizations have been waging against left-wing nongovernmental and human rights organizations, such a recording is enough to brand Liel as the public enemy.

For example, the Academic Council for National Policy, formerly known as Professors for a Strong Israel (a right-wing group), was quick to approach Attorney General Yehuda Weinstein and Justice Minister Ayelet Shaked (who has been championing the Transparency Act for tagging NGOs that receive foreign donations, when visiting the Knesset), demanding that Liel be questioned for what they call “his domestic and foreign activity against the State of Israel.”

Other right-wing media outlets, such as radio station Arutz 7 and newspaper Makor Rishon, have launched a massive campaign against Liel in recent days. Hardly a day goes by without a major report there concerning him or criticism of his activity.

Education Minister Naftali Bennett even suggested that there might be a problem with the Foreign Ministry’s DNA, in view of Liel's past as an Israeli diplomat. It was only after Ministry of Foreign Affairs employees threatened to boycott him that Bennett retracted his remarks and held a meeting with them to bury the hatchet.

Liel served as the director general of the Ministry of Foreign Affairs for just a few months, from November 2000 to April 2001. In other words, it has been almost 15 years since he last served in the ministry, which is eons in terms of international diplomacy. His impact on world leaders and vanguards in Europe is marginal, if any. So why has Liel — a lecturer at the Herzliya Interdisciplinary Center and the former president of a small soccer club (Hapoel Katamon) — turned into Israel’s No. 1 enemy? Why was a talk before Breaking the Silence, in which he outlined his forthright philosophy, presented by right-wing organizations and some in the Israeli media as an unassailable proof — so they claim — of collaboration with Israel’s enemies (as Deputy Foreign Minister Tzipi Hotovely put it) and according to them an indictment for undermining the state’s foundations?

The answer lies in the definition of “Israel’s enemies.” According to Hotovely and Bennett, Israel’s enemies are European Union countries that impose sanctions on the settlements.

On Jan. 18, the EU published its dramatic decision to the effect that all the agreements that have been signed between Israel and the EU will not apply outside the Green Line. Coupled by a previous decision to label products from the settlements, this decision aims at severely crippling the economy of the settlements. There is no question that the industrial zones in the settlements as well as farmers and business owners who enjoy far-reaching privileges from the government of Israel will suffer from this European policy, which other countries around the world might follow.

When pressure from the sanctions' threat increases in Israel, it seems that anyone who supports them or just sees them as an effective tool for bringing Israel back to the diplomatic track is deemed a traitor. This actually proves that the international pressure currently being wielded on Israel is indeed an effective tool, giving rise to much concern among right-wing Israeli organizations, parties and decision-makers.

Another reason why Liel has turned from a lecturer on foreign policy at the Interdisciplinary Center and an expert on Turkish-Israeli relations into a public enemy stems from his activity to scuttle the appointment of Danny Dayan, the former chairman of the settlement umbrella organization Yesha Council, as the Israeli ambassador to Brazil. In September 2015, members of the diplomatic committee of the Peace NGO Forum — a body that coordinates between Israeli and Palestinian NGOs that support the two-state solution — of which Alon Liel is a member, met with the Brazilian ambassadors to Israel and Palestine. They advised them to relay a message to their government that approving Dayan’s appointment would send a discouraging message to anyone supporting the two-state solution.

Even though six months have passed since the government of Israel approved Dayan’s appointment, Brazil has yet to follow suit. The scuttling of Dayan’s appointment has branded the members of the Peace NGO Forum, chief among them Liel, as people maligning Israel. The rage at the forum’s members and mainly, as noted, at Liel, stems from the fact — as perceived by the accusers — that they washed their dirty linen in public instead of voicing their reservations at home, and thus not helping “Israel’s enemies.”

This is hypocrisy, the forum’s members and Liel’s associates charge.

After all, Dayan is considered to be “the settlers’ foreign minister.” While serving as chairman of the Yesha Council and also after having left that post, he embarked on persuasion campaigns around the world, including in the United States, in a bid to persuade diplomats, parliamentarians and vanguards of the importance of the settlements, and also to foil any move to establish a Palestinian state alongside Israel.

But what the right-wing activists allow themselves to do is perceived by them as undermining the foundations of the state when their left-wing rivals do the same. This applies to fundraising abroad, foreign donations and rallying the opinion of the international community.

The result is that as time goes by and the sharper the battle over Israel’s character becomes, more and more Israelis are being bundled — against their will — among the group of traitors. ​