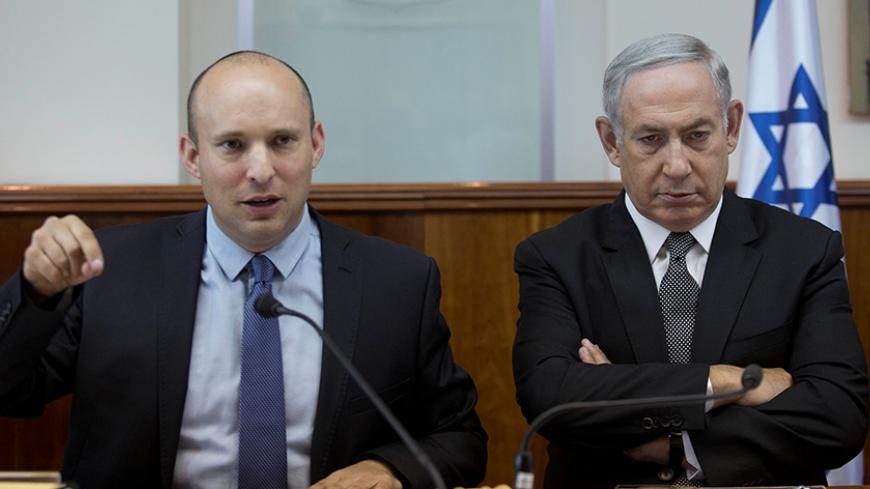 A photo in Israeli media June 28 showed a row of dignitaries at the cornerstone laying ceremony of a medical school in the West Bank settlement town of Ariel. The school is located at Ariel College, recently upgraded to the status of a university by the Council of Higher Education of the Occupied Territories, an institution under the jurisdiction of the commander of Israel’s military forces in the West Bank — separated from the Israeli Council for Higher Education — and not recognized by any state in the world.

The cameras focused on the beaming face of Education Minister Naftali Bennett, pro-settlement HaBayit HaYehudi party chairman, seated next to the school’s donor, American gambling tycoon Sheldon Adelson. Bennett’s glow was in marked contrast to the grim expression on the face of Prime Minister Benjamin Netanyahu, seated away from his veteran American benefactor. The photo appeared to confirm reports that under recent police questioning Adelson had expressed his displeasure with Netanyahu over wheeling and dealing in which Netanyahu engaged behind his back with the publisher of daily Yedioth Ahronoth, Noni Mosez. Netanyahu is under police investigation for allegedly conspiring with Mosez to reduce the activity of the Adelson-owned freebie Yisrael Hayom newspaper in return for positive coverage of the prime minister by Yedioth Ahronoth.

The growing closeness between Adelson and Bennett, as reflected in the seating arrangement at the Ariel ceremony and on the pages of the normally pro-Netanyahu Yisrael Hayom, edges Bennett closer to the premiership seat. The Jewish billionaire has often reached way down into his deep pockets to promote politicians on whom he wished to bestow his favors. The leaks from the police probe indicate that the prime minister’s seat is likely to be vacated within the coming year (if indicted). But despite his advanced age, Adelson does not favor short-term investments and does not place all his bets on one number. The seasoned businessman aspires to collect the entire pot and make sure it remains in his ideological territory for generations to come. That territory spans the area between the statement by Adelson that Palestinians are a made-up nation, and another statement by him in which he said, “I don’t think the Bible says anything about democracy … [God] didn’t talk about Israel remaining as a democratic state.”

Adelson has donated millions of dollars over the past decade to the Taglit (Birthright) organization, which has hosted tens of thousands of young Diaspora Jews, the vast majority of whom are neither right-wing nor religious, on study tours around Israel. These young people return home enthused by the beautiful country they saw, a peace-loving state surrounded by enemies. The occupation and its Palestinian victims are not part of their itinerary.

After proving that he is willing to spend vast sums to inculcate the minds of young Jewish Americans with the right-wing narrative, Bennett probably sees in Adelson a font of greenbacks for his own agenda. Bennett has been cultivating in recent years the drilling of nationalist-religious messages into the minds of secular Israeli boys and girls, some of them from left-wing homes.

A report by Molad - Center for Renewal of Israeli Democracy shows that in 2015, 94% of the Jewish culture budget was allocated to right-wing settler organizations and only 6% to those devoted to pluralistic Judaism. The sum allocated that year to after-school Jewish studies was 17 times the amount allocated to science and 119 times the sum allotted to activity related to democracy and coexistence. The report reveals that the Education Ministry does not conduct any supervision over the activities of various nongovernmental organizations (NGOs) and the contents they disseminate at state schools. The report contains data reflecting the right-wing’s efforts to “settle” with its religious ideas in the hearts and minds of secular Israelis.

The report also shows that contrary to prevailing opinion, the main goal of the NGOs funded by the Education Ministry is not to “convert” secular Jews into religious ones. Their activity is focused on establishing the status of religious Zionism as Israel’s spiritual-political elite. Many of the NGO directors and activists, as well as their urban activists (for strengthening Jewish identity within urban communities) and national service volunteers, stem from the constituencies of the HaBayit HaYehudi within Israel and in the West Bank. Zehut (Identity), for example, a nonprofit group operating on behalf of the Education Ministry, boasts of running 63 facilities throughout the country. The young women performing their national service duties at these NGOs conduct lessons on Jewish heritage and values at some 300 kindergartens and 700 schools, mostly elementary schools — about one-half of the schools for Jewish Israelis in the country. More than 95% of the budgets allocated to Jewish education are directed to organizations that adhere to the ultra-Orthodox brand of Judaism.

The results of these activities were evident in a clip documenting a fourth-grade end-of-year ceremony at a secular school in the town of Kfar Saba. Aired on Channel 10 June 25, it shows 10-year-olds, their heads covered by Jewish skullcaps and wearing four-cornered garments to which fringes are attached, as worn by ultra-Orthodox Jews, singing war-era songs and reciting verses of yearning for the establishment of a third Jewish temple. At an end-of-year party at a kindergarten in the town of Ashdod, 5-year-olds placed gold-colored stones as “foundation stones” for a future temple. The Education Ministry said in response that “determining the nature of end-of-year parties and their contents was always within the purview and judgment of the nursery school teachers themselves.”

Nonetheless, in March 2015, the head of the Education Ministry’s Torah studies department, Itiel Bar-Levy, boasted of “an educational revolution” and declared, “We operate on a voluntary, informal basis, but we have a tremendous ability to influence students’ souls.”

A committee of experts headed by professor Aliza Shenhar recommended in 1994 that Judaic subject teachers have a similar background to that of the school community. Speaking to Al-Monitor, Shenhar recalled that the committee recommended specifically that “parents sending their children to state schools should not abandon their education in the area of Jewish sciences — meaning Judaism as a culture — to those whose views are different and even opposed to their own.”

She reiterated her call to parents to take back the reins of their children’s education and to emphasize the link between Jewish culture and universal, pluralistic values. In recent days, parents of children in state schools have expressed their displeasure with the “nationalization” of the Jewish identity of future generations by the religious right. Social media was full of outraged comments; the town square (political echelon) was empty.

More than three decades ago, Rabbi Yoel Bin-Nun, one of the heads of the Gush Emunim settlement movement, wrote that “the arena in which measures will be decided is the heart of the people and the political-public climate.” He noted that the central lesson he learned from the evacuation (“destruction” as he called it) of the Israeli settlement of Yamit in the Sinai Peninsula as part of the 1979 peace treaty with Egypt is that “success is impossible without the support of the vast majority of the people …”

Bennett has learned this lesson well. He knows that to achieve power he has to conquer the hearts of the vast public that does not frequent synagogues or visit the settlements. He has plenty of time. The country’s children are under his control as minister of education. When those children who prayed for the coming of a third temple are old enough to vote, Bennett will only be in his early 50s. With the help of wealthy Uncle Shel (Adelson) from Las Vegas, money will be no object, either.