Will Turkey end up stuck between Kurds, Russia?

Observers wonder how long Turkey can juggle a cold war with Russia and a heated conflict with the PKK before the latter two join forces. 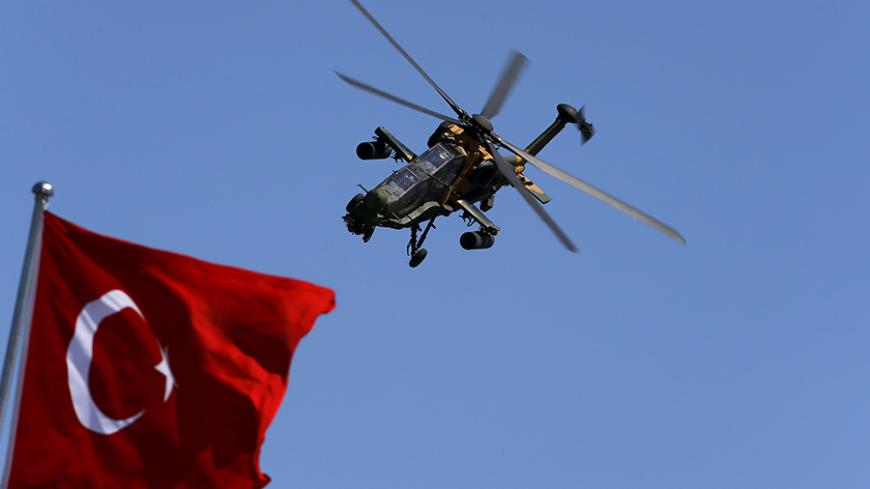 A Turkish Attack and Tactical Reconnaissance Helicopter performs a maneuver during a ceremony marking the 93rd anniversary of Victory Day in Ankara, Turkey, Aug. 30, 2015. - REUTERS/Umit Bektas

An old Turkish proverb says, “You can’t carry two watermelons under one arm,” meaning that two big tasks should not be tackled at the same time. These days, the Ankara regime seems to be attempting exactly that. At home, it is waging a war on the Kurdistan Workers Party (PKK), and regionally, it is sliding into a cold war with Russia that carries the risk of heated confrontation. As a natural outcome, these two wars could draw Russia and the PKK together, creating a tough challenge for Turkey.

The first frost in the cold war with Russia came Nov. 24 when Turkey downed a Russian warplane on grounds it violated Turkish airspace at the border with Syria, where Russia is intervening militarily to prop up the Damascus regime and Turkey is backing opposition forces. A brief recollection of the past would explain why the PKK should not be overlooked in this cold war.

In the 1980s, Syria — the Soviet Union’s ally in the Middle East — offered safe haven and military and logistic support to the PKK in a bid to destabilize NATO’s flank country, Turkey, among other objectives. In the wake of the Soviet Union’s collapse, the Russian Federation — irked by the pan-Turkist winds blowing in Turkey and the support Chechen separatists enjoyed there — allowed the PKK to operate legally on its soil. The group was even allocated a "culture and education camp" near Yaroslavl, northeast of Moscow. No wonder Russia became the first country where PKK founder Abdullah Ocalan — now jailed on a prison island in the Sea of Marmara — sought refuge in 1998 after leaving his longtime safe haven in Syria, under Turkish pressure.

The PKK is again part of the Syrian equation today, though in a different form. The PKK’s Syrian offshoot, the Democratic Union Party (PYD), has emerged as the undisputed, dominant power in Rojava (the term Kurds use to refer to western Kurdistan in Syria), and a well-proven force in the fight against the Islamic State (IS). Ankara, however, sees the PYD as a threat, wary that the Kurdish autonomy in Rojava threatens Turkey’s territorial integrity.

In this context, Russian Deputy Foreign Minister Alexei Meshkov’s remarks on Dec. 16 suggest Moscow is already showing the tip of “the Kurdish card” to Ankara. “Turkey's actions — and on the contrary, its inaction on certain issues — pose a real threat” to Russian security, Meshkov told Russia's state-owned news agency RIA Novosti. “The Kurds, of course, should not be excluded from this process [of peace talks on Syria], as well as from collective efforts against [IS] and other terrorist groups in Syria and Iraq, where they play a significant role in countering the terrorist threat.” It is important to note that the PKK has been on the forefront of the fight against IS in Iraq. Thus, Meshkov’s comments reflect political support for the PKK as well.

His reference to Turkey’s “actions” and “inactions” describes Ankara’s Syria policy. If Turkey’s support for jihadis is the action Russia sees as a threat, then Turkey’s failure to do its part against IS must be the inaction Russia rebukes. This very policy is the core reason for the cold war between the two.

Turkey has refused to change its Syria policy, while at the same time piling pressure on the PKK by escalating the war in the Kurdish-majority southeast. The more the pressure grows, the higher the possibility of the PKK gravitating toward Russia.

The frontline in the new war with the PKK has shifted to urban areas in the southeast, leading to extensive destruction and collective punishment of civilian populations. Take, for instance, the Sur district of Diyarbakir, the region’s largest city, where police have been battling PKK militants entrenched in residential areas. The historical district last week emerged devastated after a nine-day, round-the-clock curfew, lifted for only 17 hours, drawing comparisons to Middle Eastern cities ravaged by civil war — and rightfully so. According to a tally by journalist Celal Baslangic, who closely follows the southeast, 40 curfews covering a total of 130 days were imposed on 18 districts in the region from Aug. 16 to Dec. 8.

What brought about fighting in the urban areas is the sociopolitical transformation that Turkey’s Kurdish movement has undergone in recent years. As the Kurdish question became highly politicized, the Kurdish movement grew into a popular movement with broad and vibrant bases in cities and towns. The security crackdowns were launched after the Patriotic Revolutionary Youth Movement (YDG-H), dominated by young PKK militants, assumed the role of a policing force in neighborhoods with strong pro-PKK bases as an alternative to state authority. The security operations, which began in July, were met with armed resistance on the local level, with militants digging trenches and erecting barricades in residential areas. According to statistics compiled by Turkey’s Human Rights Association and revealed Dec. 10 on the international Human Rights Day, 157 civilians have been killed in the clashes since July, in addition to 195 PKK militants and 171 members of the security forces.

On Dec. 15, the government ordered the army into action as the special police forces, which had led the operations so far, failed to break the resistance at flashpoints in the provinces of Diyarbakir, Mardin and Sirnak. Backed by tanks and armored vehicles, 10,000 troops have since launched operations in Sirnak’s towns of Cizre and Silopi, where armed PKK militants have been holding out for months behind barricades and trenches.

Turkish President Recep Tayyip Erdogan keeps repeating that the fight against the PKK will continue as long as it takes. Yet a more reliable measure exists to guess how far the fight could go. Erdogan’s war on the PKK has become an indispensable vessel of his unyielding ambition for a shift to a presidential system, and it has already brought his party victory in the Nov. 1 elections. Thus, the regime will be compelled to carry on the war as long as it takes to secure the larger nationalist vote that any future referendum on a constitutional amendment will require.

Meanwhile, the regime’s mounting military pressure on the PKK is likely to make the group open to external support. Ending the cold war with Russia is thus imperative in terms of Turkey’s domestic stability as well. Yet normalization has become virtually impossible, with Russia demanding an apology and compensation for the downed jet as a precondition to mend fences. Agreeing to these demands would amount to a humiliating defeat for Erdogan, given that Ankara has said that the jet was downed for violating Turkish airspace and that it will never apologize for that.

In sum, the framework of a cold war enables Russia to increase military and political pressure on Ankara to deter it from backing jihadis. It remains to be seen how long Ankara will be able to sustain the cold war with Russia and the heated conflict with the PKK without letting its two adversaries link up.