Foreign investors are trembling over Turkey

Foreign direct investments in Turkey dropped dramatically in September despite some encouraging signals from European and American investors earlier in the year. 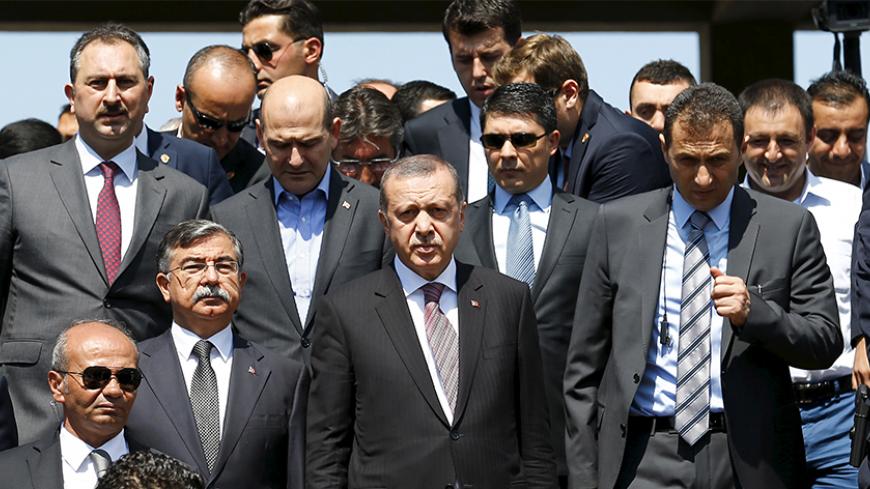 Turkey's President Recep Tayyip Erdogan leaves the Kocatepe Mosque surrounded by security guards, politicians and officials, Ankara, Aug. 26, 2015. Erdogan said Turkish interest rates must come down to boost investments, returning to a theme that he addressed repeatedly before the June election, when he called for lower rates to boost growth. - REUTERS/Umit Bektas

The European Union and the United States topped the list for foreign direct investments (FDI) in Turkey in July and August, respectively, a welcome surprise for Turkey after Asian countries led the list earlier in the year. Investor sentiment, however, seems to have soured in September, with official figures indicating a sharp decline.

According to Economy Ministry statistics, FDI stood at $1.15 billion in May, $1.1 billion in June, $3.38 billion in July and $1.99 billion in August. In September, however, foreign investors put only $791 million into the country.

The figures include foreign purchases of real estate. Excluding those purchases, FDI from Asian countries topped the list in May and June with $384 million and $390 million respectively, before declining to $88 million in July, $53 million in August and $34 million in September.

In July, the surprise came from EU countries, whose entrepreneurs invested $2.9 billion in Turkey, making the bulk of the total of $3.06 billion, excluding real estate buys. Monthly FDI from the EU had ranged between $170 million and $439 million during the first half of the year, which makes the $2.9 billion figure for July even more striking.

And where did EU investors put their money? The Economy Ministry data show that $2.2 billion of the July FDI went to the establishment of financial intermediary institutions.

The change in sentiment among EU and US investors appeared to be linked to Turkey’s election calendar. Both groups appeared to have begun positioning themselves in Turkey after the June 7 general elections. Unlike their European counterparts, who focused on setting up financial intermediaries, US investors primarily put their money into the manufacturing sector. EU entrepreneurs established 906 new companies in Turkey in the first nine months of 2015, while those created with US money numbered 88.

The total FDI data shows the new foreign-capital companies are concentrated mainly in wholesale and retail commerce followed by rental real estate and manufacturing. In the manufacturing category, the chemical industry tops the list of sectors where foreign-capital companies are the most active, followed by the textile, food, beverages and tobacco, and machinery and equipment sectors.

Another interesting figure pertains to “zero” investments. Along with Canada, countries from Africa, Central and South America and the Caribbean put no money into Turkey during the first nine months of the year.

With two parliamentary elections in five months over, dissipation of political uncertainty had been expected to improve investor sentiment. Following the major victory by the Justice and Development Party (AKP) in the Nov. 1 snap elections, international credit-rating agencies said political uncertainty in Turkey had diminished, but warned that serious risks persisted.

In a Nov. 2 statement, Moody’s said the AKP victory had reduced near-term political uncertainty, but the impact on sovereign credit quality would depend on its strategy to combat low growth, high inflation and volatile capital flows. Banks in Turkey still face elevated risk aversion toward emerging markets and elevated geopolitical risks despite the lowering of political uncertainty, it stressed.

In a similar vein, Fitch said, “Resolving policy uncertainty and unpredictability and implementing reforms that promote durable economic growth and rebalancing that reduce external vulnerabilities would be positive for the sovereign rating.”

Indeed, the dissipation of political uncertainty alone has failed to increase Turkey’s appeal to investors. The government was supposed to use the post-election window of opportunity to work for internal peace. Yet, the national unity rhetoric has so far proven empty on the ground. The government has maintained its politically-motivated onslaught on companies close to the Fethullah Gulen movement. Following the seizure of the management of Koza Ipek Holding, which includes two newspapers and two television channels, shortly before the Nov. 1 polls, the companies of Kaynak Holding met the same fate in the wake of the elections last month. The operations have sparked fear in the entire business community, discouraging foreign investments and causing even Turkish investors to look for opportunities abroad.

The ongoing conflict in the mainly Kurdish southeast and simmering tensions with Russia have emerged as further serious risks for foreign investors.

For the first nine months of 2015, total FDI in Turkey amounted to $12.6 billion, including real estate purchases, up 32.3% from the same period last year. But despite the increase, the figure remains far behind FDI levels in earlier years. In 2006 and 2007, Turkey had attracted $20 billion and $22 billion respectively. Eight years later, FDIs are down to some $12 billion in a stern reminder that Turkey is far from overcoming the foreign investment crisis.