Dutch entrepreneurs topped the list of foreign investors in Turkey in 2014, as the number of foreign companies exceeded 41,000, despite the insecure climate that has emerged in Turkey in terms of democracy and the rule of law. 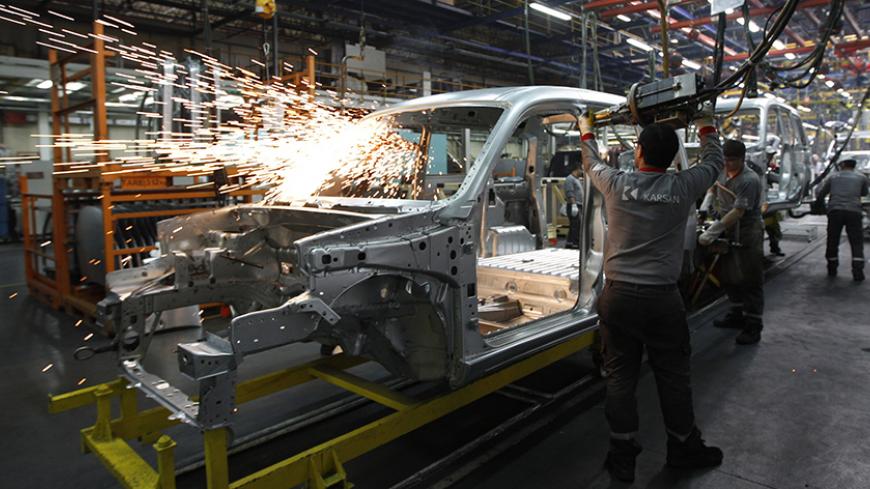 Employees work at the assembly line of a Karsan automotive factory in Bursa, Feb. 17, 2011. Turkish automotive company Karsan began production after it signed a strategic partnership deal with Italian bus builder BredaMenarinibus to manufacture the company's buses in its Akcalar plant in Bursa. - REUTERS/Murad Sezer

Turkey’s Economy Ministry published in December 2014 a comprehensive, 22-page report on international direct investments in Turkey. Based on this report, Al-Monitor has created a profile of foreign investment in the country.

Let’s first look at the table covering the period from 1954 to October 2014. The number of active companies involving international capital has reached 41,131 in six decades, including 6,257 Turkish companies with foreign partners. Foreigners are mostly present in the wholesale and retail sector, where 14,371 companies operate. The real estate sector comes second with 6,619 foreign companies, followed by the manufacturing industry, where 5,652 companies operate, producing mostly chemicals, food, beverages, tobacco and textiles.

A total of 19,228 companies belong to entrepreneurs from European Union countries, while non-EU Europeans own 4,328 companies. Investors from the Near and Middle East own 10,968 companies, while another 2,989 belong to Chinese, South Korean and other Asian entrepreneurs.

The 2014 foreign data reveal some atypical trends. The manufacturing industry, for instance, used to be the third sector with the most foreign investment over the past 60 years, but climbed to first place in 2014. Likewise, financial intermediary activities — which were absent from the top three before — came in second last year, followed by investments in the power, gas and water sectors.

Foreign direct investments declined in 2014, amounting to $9.79 billion in the first 10 months of the year, compared with nearly $13 billion in the whole of 2013. Moreover, $3.51 billion of that amount was spent on purchases in real estate, which is a nonproductive realm, while the manufacturing and services sector attracted investments worth $6.28 billion.

In contrast, Turkey’s appeal decreased for investors from a number of prominent countries. Austrian investments, for instance, fell from $654 million in the first 10 months of 2013 to $46 million in the same period last year; US investments were down to $164 million from $307 million; and French investments decreased from $201 million to $99 million.

The decrease in foreign direct investments, especially those from EU countries, suggests that investors are being scared off by the insecure climate that has emerged in Turkey with respect to democracy and the rule of law. Still, EU investments remain the largest, accounting for 62% of the total. With such a level of economic integration with the EU, Turkey cannot afford to ignore, underestimate or defy European criticism on democracy, the rule of law and freedoms. European standards are not attained only through increasing the quality of products and services.

Though Germans were surprisingly overtaken by the Dutch in terms of new direct investments last year, they remain on top in terms of the number of companies set up in Turkey. A total of 3,594 companies involving international capital were established in Turkey last year, including 1,015 owned by both EU and non-EU European entrepreneurs. Germans top the list with 293 companies, followed by Britons with 111 and the Dutch with 109.

In sum, tens of thousands of foreign companies remain active in Turkey, but foreign investments have fallen far below the $20-22 billion level of 2006-2007. It is time for the government to ponder its “confidence problem.”