Christmas and New Year's festivities have become an indication of hard-core religious conservatives’ fear of increasing secularization in Turkey. 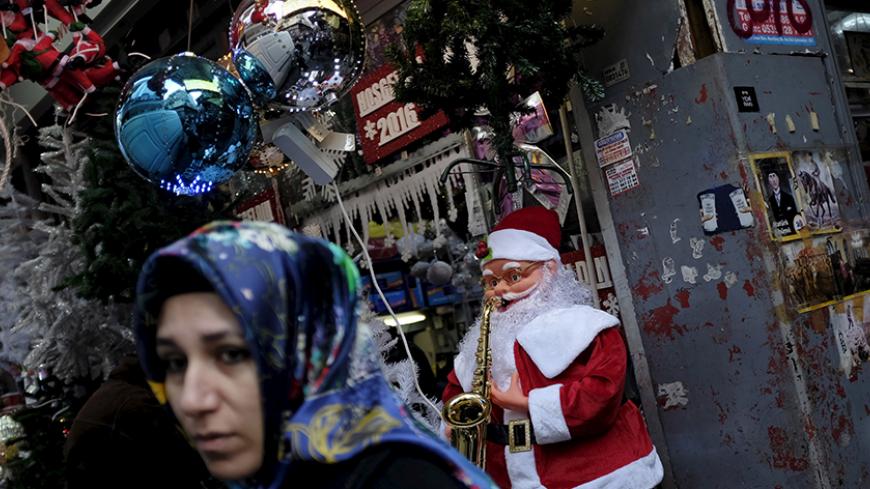 As usual at this time of the year, the debate in Turkey on whether Muslims should celebrate the New Year erupts. Christmas and New Year's celebrations are not banned in Turkey, as is the case in Tajikistan, Somalia and Brunei. But the arguments used in those countries that such celebrations are "contrary to Islamic culture, which could damage the faith of the Muslim community" are not foreign to hard-core conservatives who oppose such festivities in Turkey.

While Christmas is not celebrated as a religious holiday in Turkey — where 99% of inhabitants are Muslims — Santa Claus, the Christmas tree and social gatherings have in time become integral elements of New Year’s Eve — a holiday widely celebrated by secular Turks. The dispute takes place each year between the proponents of the celebrations as harmless entertainment, and conservative Muslims who often wrongly confuse Christmas with New Year’s Eve but find both holidays “foreign” and unacceptable.

Turkey’s top official religious body, the Department of Religious Affairs (Diyanet), has offered differing views on this controversy in the past. In 2003, Diyanet’s statement about New Year’s Eve leniently explained it as “part of a universal culture, like celebrations of Mother’s Day, Father’s Day or birthdays,” different from religious celebrations such as Christmas. It described the cultural element of the New Year's celebrations in a global sense, while not neglecting to remind religious prohibitions and appropriate behavior for merrymaking. In recent years, however, the Diyanet statements have taken a less positive tone, emphasizing how such celebrations “alienate” Muslims from their own culture. While this new tone might be the reflection of the latter-day toughening of conservatism in Turkey, it still does not negate the 2003 statement or its validity.

Yet, Diyanet is not the only Islamic voice that has a say in this matter. The dispute escalated further this year by a group of young, pious activists who marched on Dec. 21 with a giant poster that read “A Muslim would not celebrate Christmas.” They were part of the Fatih Generation Youth Education Association who protested the Christmas tree in Istanbul's Maltepe municipality. Posters read "Don't play with our sensitivities" and "Muslims celebrate Eid, not Christmas." A week before, a group of activists from the Islamist Felicity Party’s Atasehir branch in Istanbul also protested a decorated Christmas tree in the local Brandium shopping center, with signs that read “We are the community [in religious terms, the ummah] of the Prophet Muhammad who brought prayer [namaz] from his ascent to heaven, not of Santa Claus who brings presents for New Year.” Another sign the protesters held read “They leave believers and make friends with infidels — do they seek honor and dignity at their sides? Instead, all greatness and honor is Allah’s.”

The debate attained a new level on social media, where “Musluman Noel Kutlamaz” (“A Muslim doesn’t celebrate Christmas”) became a trending topic on Twitter. Lutfu Turkkan, a member of parliament from the Nationalist Action Party, angrily wrote, “A Muslim doesn’t celebrate Christmas … That is true. But does the same Muslim glorify the one who robs the state, who is unfair to orphans? Does s/he applaud? Go after him?” Some other tweets included, for instance, a photo of a shopkeeper with a sign “I don’t sell snacks on New Year's” with the word “Noel” crossed out next to it. Appropriately, another user’s photo included an explanation of what Christmas stands for — Christians’ celebration of the birth of Jesus on Dec. 25, and an explanation that New Year's is what everyone celebrates on Dec. 31, reminding people not to confuse the two. One user posted a striking cartoon of four images portraying a bearded man wearing a long dress, sitting calmly with obvious indifference to corruption, thievery and poverty. In the last drawing, the idea of New Year's celebrations makes him jump in the air full of rage while screaming, “A Muslim does not celebrate Christmas.”

The photo portrayed what many other users expressed in a similar way — a perceived hypocrisy of religious conservative citizens who do not pay attention to big societal problems but obsess about New Year's celebrations. But while these less observant citizens, most probably the opponents of the ruling Justice and Development Party (AKP), feel that way, others like the regional youth branch of the AKP in the town of Kocaeli feel the “Dangers of Christmas” instead. They organized a conference on that topic on Dec. 24; the program included readings from the Quran, chanting of religious songs and a speech by a graduate of a school that trains government-employed imams.

So every year, the manifestation of this disagreement on the celebration of New Year's happens in a different way. Yet, it is not just the conservative religious people in Turkey who seem incapable of respecting different lifestyles. For instance, three years ago during the New Year's celebrations at Youth Square in the coastal town of Marmaris, a man named Aras Karahan took out a prayer rug and started praying just minutes before midnight. Tensions rose when, most probably secular, Turks yelled “provocation, provocation,” and one man went up to Karahan to step on him, before being stopped by people around him. “I didn't want to provoke anyone. I just prayed my thanks here,” Karahan said. But even though his choice, whether conscious or unconscious, for choosing the square at midnight on New Year's Eve for prayer might have been inappropriate, he should not have been so harshly scrutinized. Unfortunately, the disrespect of differences and intolerance in Turkey frequently goes both ways, from conservatives to seculars and vice versa — though this may not be obvious at first.

Ultimately, what seems almost impossible for many intolerant Turks on any side of the political spectrum is just letting others freely be.

New Year's celebrations are another indication of hard-core religious conservatives’ fear of increasing secularization in Turkey, but data shows that not much can be done about it. While the state might become increasingly religious and is less secular than before, Turkey’s society is not increasingly religious. So celebrations will continue in Turkey, as will the New Year's presents fair in Ankara that has 230 companies participating this year.

As far as those anxious or threatened Muslims are concerned, they have a lot to ponder. As Ahmet Hakan, popular columnist of daily Hurriyet put it: “Are you complaining by saying ‘But in these celebrations certain Christian motives are being used?’ Well then, sit down and think: Why isn’t everyone in the world imitating Muslim motives, but using Christian ones instead?”

In the meantime, we should be respectful to those around us. The Istanbul Forestry Regional Directorate invites citizens to plant a pine tree by distributing free saplings at shopping centers and metro stations. Now, that is one wonderful way to start the new year — by contributing to the common good for all.