Snapshots of changing Christmas and New Year's celebrations in Turkey portray a picture of cultural divisions. 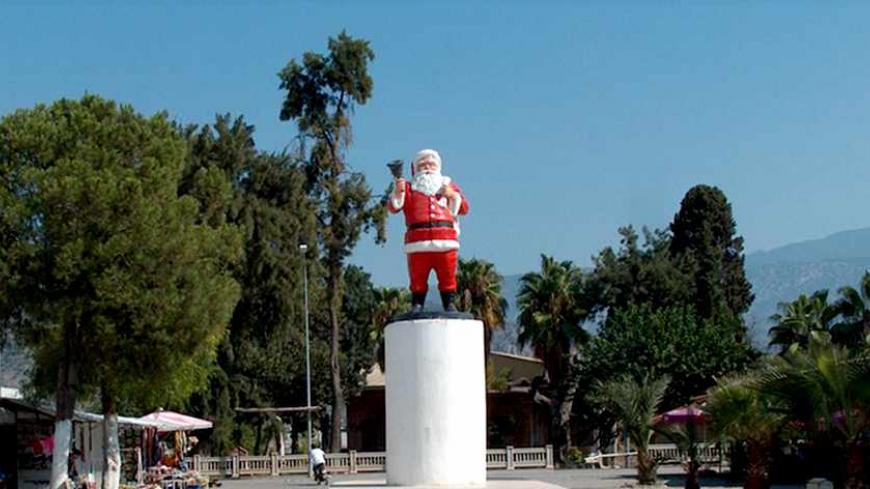 A statue of "Noel Baba" stands in Demre, a district of the southern town of Antalya. - panoramio.com/Ahmet Sertturk

When you study religion, you make intriguing friends. I had two rather odd experiences on the same day. When I went to visit a longtime friend who is an observant Muslim, I found a six-foot plastic pine tree with a few odd ornaments and a torn-apart Santa Claus hat standing outside her family's door. My friend opened the door with a concerned smile and said, “Wait until your son becomes a teenager, then you will know what I am going through.” I replied, “Good to see you, too.”

My friend has two teenage daughters. Her husband had given into the girls and brought home a tree as a surprise and to “welcome the new year,” but it was not acceptable to my friend. She said, “It is forbidden to join in the celebrations of the other religions.” Her daughters came in with teary eyes and fought her.

“We are not celebrating Christmas,” said Zeynep. “We are just ending the year with a few decorations, what is so bad about that?” To make a long story short, we could not convince my friend to accept the poor tree back into the house.

For a 99% Muslim country that does not celebrate Christmas, it's surprising how much talk of Christmas takes place each December in Turkey. Two years ago on Dec. 28, the mufti of Kesan (a district of Edirne, a city in Thrace, neighboring Greece) made headlines by his infamous statement of “Had Santa Claus been a decent man, he would not enter into the houses from the chimney, but would have used the door.” If you Google “Noel Baba, Demre” you will immediately see the images of a huge Santa Claus monument. Demre is a district of the southern town of Antalya, and Noel Baba means "Santa Claus" in Turkish. St. Nicholas Church still stands in the town.

My next appointment was at the Hagia Sophia church with an Armenian friend, who said, “We should be grateful they only want to turn Hagia Sophia into a mosque, we still have a few old churches with ancient icons left to us.” Who would have known his joke would turn into a serious populist demand by many Turks who fail to question why on earth would we want to pray in a place originally designated as a church. Yet, around Christmastime you can find many columns penned in Turkish newspapers explaining why Christmas is idolatry.

Muslim Turks do not celebrate Christmas, but secular Muslim Turks do celebrate the new year. On the night of New Year’s Eve, almost all secular Turkish homes prepare a celebration. It may be at home with friends visiting and a roasted turkey dinner, or at a restaurant or pub. Turks ring in the new year with kisses under the mistletoe (without necessarily knowing why), dancing and singing. Mostly, the traditional drink raki accompanies these celebrations. Many districts in cosmopolitan cities such as Istanbul, Izmir and Ankara commemorate the turn of the new year with lights and decorations. And still a few local municipalities may put out a sign saying “Merry Christmas” in Turkish. You can be sure these municipalities belong to the main opposition party, Republican People's Party (CHP), which happens to be at peace with all religious denominations.

Turkey used to be the center of Orthodox Christianity, and according to government records, there are now 349 functioning churches in Turkey. Yet, not only the number of Christians but also the number of those attending services have decreased over time, as life for a non-Muslim has become less than pleasant in Turkey.

While  secular and observant Muslim Turks debate among themselves how to ring in the new year and whether it is acceptable to wear Santa hats, have little decorated pine trees in their houses, roast turkey for dinner, exchange gifts and even enjoy the national lottery (or is it gambling and unacceptable to Islam), a dwindling community of Christians still struggles to celebrate one of the most important days in their religious calendar.

Stratos Moraitis, a Turkish writer, told Al-Monitor, “Due to my age, I happen to have a historical perspective on Christian holidays in Turkey, a country which has lost almost the totality of its Christian population since the turn of the century. Fifty years ago, the Christian holidays were named yortu (from Greek giorti) and were celebrated by Christian and Muslim families alike with visits and dinners and gifts. Especially in neighborhoods and cities where Christian minorities were still recognizable such as Tatavla [Kurtulus], Yenikoy, Pera [Beyoglu] in Istanbul and Izmir, both Muslim and Christian holidays were shared by all ethnicities. As the number of Christians dwindled after the 1970s and as additional animosities [the Cyprus war and the Armenian genocide] were introduced to alienate religious minorities in society, these links totally disappeared. Today, the biggest Christian holidays such as Christmas and Easter are nonexistent in Turkey apart from a few masses in prominent churches and family organizations.”

Another Greek Orthodox friend explained, “My best memory from childhood was carrying the candle from Christmas mass home, struggling to keep it lit so we could come home and draw a cross with its smoke, and people would gently make way for us as we walked and they would smile. Those smiles are a long gone memory.” Moraitis sadly told Al-Monitor, “Personally, Christmas is unbearable for me in Turkey. The climate makes you regret the fact that you are spending a period of the year that is supposed to be dedicated to forgiving and redemption in total alienation from the society at large." It is a sentiment shared by several Christian friends living in Turkey.

As some districts, such as the fancy Nisantasi in Istanbul, light up in welcoming the new year, there is growing resentment among the observant Muslims. Most Islamists pay extra attention not to even schedule an outing on the last day of the year, just to make sure they are not involved in any celebration.

We can make many comments about Turkey, but maybe these two provide clues into the Turkish mentality better than entire books: One is that a doctor who dressed in a Santa Claus outfit to boost the morale of his child patients was put under criminal investigation. His suspected crime was “wearing a Santa costume.” In other news, a young group of Islamists protested “Santa Claus” in the heart of Istanbul as well. They had brought a blowup Santa Claus just to inflate him as a sign of their victory. One of their signs read, “Christmas is a coup against Islam.”

Times have changed quite a bit, and how Christmas and the new year is perceived depends on where you are in Turkey. In many districts of major cities the lights, Christmas decorations and trees appear in early December, yet they fail to conceal an ever-growing resentment by Islamist youth against all things different. Even the jolly image of Santa falls prey to this anger!