Many of Iran's Christians celebrate Christmas on Jan. 6, but the holiday is becoming popular across Iran and many Christians are celebrating on Dec. 25, with some young Iranians joining in. 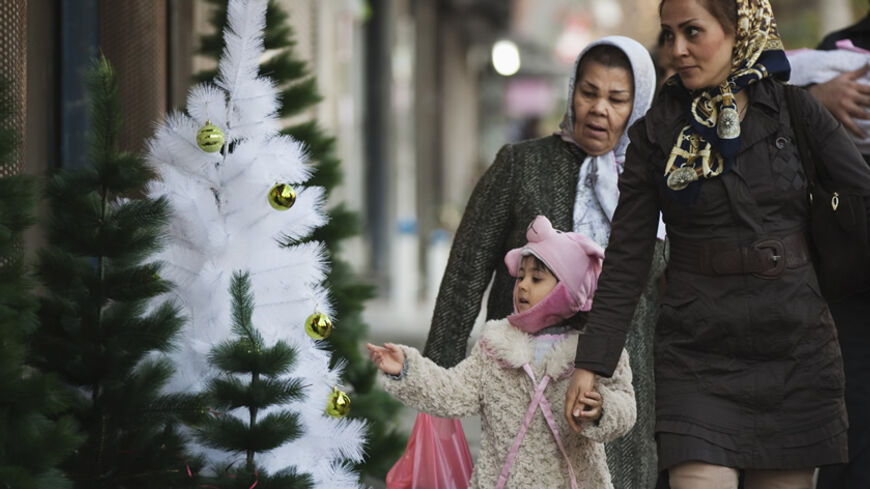 A girl looks at Christmas trees as she and her mother walk past Christmas decorations in central Tehran, Dec. 13, 2011. - REUTERS/Morteza Nikoubazl

As Christians around the world celebrate Christmas, the holiday season is also observed in Iran, a predominantly Muslim nation where Christians make up less than 1% of the country's approximate population of 77.5 million.

Christmas trees decorated with red, green and gold gift boxes placed behind shop windows or at the entrances of different shopping malls and hotels can be seen, especially in the Christian neighborhoods of Tehran.

Decorated trees, along with Nativity scenes of the Virgin Mary, Joseph and baby Jesus, can also be seen in shops along Mirza Shirazi Avenue and Ostaad Nejatollahi (Villa Avenue) and its surrounding neighborhoods in central Tehran, where many Iranian Christians reside.

Shermin, an Iranian Christian, told Al-Monitor, “Like other Christians in the world, we celebrate Christmas at home along with our family and friends, exchange gifts and party.” She added, “There are a lot of good things to eat at this joyful time of the year.”

Trees and decorations sell well despite being fairly expensive. A pine tree of 2 meters (6.5 feet) is a luxury item that can cost up to $1,000, while the smaller artificial Christmas trees sell for $100 or less each.

A Christian shop owner in Tehran told Al-Monitor that a Christmas tree with all its decorations costs around $300 on average.

According to the Statistical Center of Iran (SCI), over 117,000 Christians reside in Iran, most of whom are Armenians who are followers of the Oriental Orthodox branch of Christianity. More than 46,000 members of this minority group live in Tehran. Assyrians, Catholics, Protestants and Evangelical Christians make up the remainder of Iran's Christian population.

Despite being a minority, Iran’s Christians, Jews and Zoroastrians are recognized as established religious minorities and are represented in parliament, and also enjoy freedom to practice their religions and perform their religious rituals.

“You can’t celebrate Christmas in any Islamic country the way we do in Iran,” Rafi Moradians, an Iranian Armenian in Tehran, told Al-Monitor. Referring to the community’s exclusive sport and cultural club, Rafi said, “Authorities don’t impose any restrictions on us. We attend church services and there are also special celebrations at the Ararat Club."

The festive mood, however, is not just limited to the Christian neighborhoods of Tehran, as some shops, especially those in the northern parts of the city, dedicate at least some section of their shop windows to decorations such as candy canes, snow globes and Santa Claus figures.

In recent years, municipal authorities have also put up banners celebrating the birth of Jesus on many main streets and at the St. Sarkis Armenian Church on Villa Avenue, where a service is held every year.

Unlike other countries in the region where public celebration of Christmas is limited to hotels frequented by foreigners, there is no such restriction in Tehran. The sale of Christmas ornaments, which during the first years of the Islamic Revolution was limited to Christian districts, can now be seen around town.

In fact, festive Christmas decoration and celebration take place throughout the country, specifically in major cities such as Esfahan, Shiraz, Tabriz and even religious cities such as Mashhad.

Over the past decade, celebrating Christmas has become increasingly popular among young Iranians, regardless of their religion. Of course, the trend has a partly religious basis, as Muslims acknowledge the birth of Jesus Christ and recognize him as one of God's holy messengers. But another reason for taking part in Christmas celebrations seems to be rooted in the Iranian youth’s desire to “keep up with the rest of the world.”

“I get so excited when I see shops decorated with Christmas trees. It gives me the same good feeling and joy that I get during the Persian New Year, Nowruz,” Venus, a Muslim student who studies Iranian art at one of Tehran's universities, told Al-Monitor.

Ordinary Iranians are not alone in the holiday celebrations and in exchanging greetings at Christmas time. This year, President Hassan Rouhani sent season's greetings to Pope Francis and world leaders. Through his Twitter account, Rouhani reached out to ordinary Christians around the globe, as well as those in Iran.

“May Jesus Christ, the prophet of peace and love, bless us all on this day. Wishing Merry #Christmas to those celebrating, esp #Iranian Christians,” he tweeted.

The Twitter account belonging to the office of Supreme Leader Ayatollah Ali Khamenei also featured a series of messages on the occasion of Christmas. One of the messages read: “It’s time for all caring Muslims, Christians & Jews to obey the prophets & truly honor #Jesus' birthday by standing up against Israeli crimes.”

Covering Christmas and New Year's events has also become routine for Iranian media in the past decade. For instance, the state news agency IRNA published a photo report of celebrations across the world this year. A similar photo report was published by the conservative Tasnim news agency and videos of Christmas celebrations around the globe were broadcast on state TV channels.

“As an Armenian, I’ve never felt any discrimination and I’ve been treated just as other Iranians,” said Rafi, who is a Western-educated Armenian and has worked in various government organizations, including as a senior adviser in one of Iran’s ministries.

“If I had any problems living as an Armenian in Iran, I would have left the country a long time ago,” he told Al-Monitor.

This year’s Christmas coincided with a mourning period for Muslims, Shiites in particular. But Iranian Christians say they have not encountered any restrictions on their celebration of Christmas or their preparations for the New Year.