More Muslims in Gaza are buying Christmas trees and joining in Christmas festivities as an occasion to solidify unity and forget the recent war with Israel. 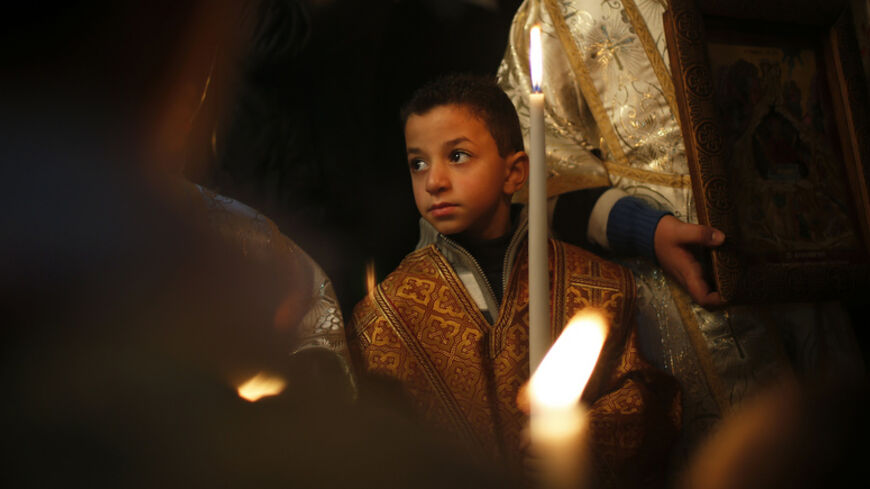 GAZA CITY, Gaza Strip — Happily jumping around, Ilaa, 3, drops a couple of Christmas ornaments on the floor of Hadayana gift shop in Gaza's al-Wahda neighborhood. Finally, she chooses the silver ornaments. Her mother, Bissan al-Qishawi, laughs at her daughter’s clumsiness as she helps her pick up the balls and Santa’s chocolates that scattered on the floor.

“We have a Christmas tree that I bought years back. We are buying new ornaments. All I wish for is to raise my daughter to be loving and tolerant. This is why we are celebrating the occasion with Christians,” Qishawi, a Muslim, told Al-Monitor on Christmas eve.

Qishawi’s two daughters, Ilaa and Salma, wake up the following morning to their gifts under the tree. “I want them to forget the gloominess of war and its traumatic memory,” she said.

The Qishawis are not an exception. Many Muslim families in Gaza celebrate Christmas. Umm Fawzi, for example, who did not want to give her real name, bought a $90 tree. She told Al-Monitor, “I wanted to bring joy to my four kids and forget the woes of this year and the memories of war. At the end of the month I make sweets and my husband and I light up the tree. We are all very excited because the tree is big this year.” Umm Fawzi knows how important it is for children who grew up amid war and division to be raised to love all Palestinians, Muslim and Christian alike, and to celebrate all holidays.

Saleh Murtaja, the owner of Hadayana gift shop, said he has sold many Christmas trees to both Christians and Muslims this year. “Veiled women come along with their children, as well as Christian families. They all buy ornaments, trees and bells. However, sales turnover has been lower this year.”

Murtaja remembers how nine years ago his father grew Cupressus trees, but today, Christmas trees are mostly plastic and imported from China and Israel.

In Gaza's al-Zaitoun neighborhood stands the Catholic Church of the Latin Convent. Preparations were underway early in the morning of Dec. 24.

Inside, the church teemed with warmth, roses, candles and incense, and Sister Maria was assorting red and white roses. She told Al-Monitor that the saddest thing about this Christmas was that people were thinking about leaving the Gaza Strip following the dire war.

Father Mario Da Silva told Al-Monitor, “Christmas is a moment of happiness, a time to forget about war, a time for peace. The lord of peace was born on this day. It is the night to wish for peace on this planet.”

“This Christmas,” he said, “should bring about change in our hearts. It is not just another holiday, but rather an event that is renewed to change the world. I can be happy during suffering and war because happiness is an inside job.”

Da Silva, who witnessed the last war, said that his parish had stood at 133 members but now only 120 members are left after three families moved out of the Gaza Strip for good.

Rosette Khristo, 72, was dressed in a black coat and had little to celebrate this Christmas. Trying to shield herself from the freezing weather, she buttoned it all up. “There are no festivities, no happiness and my heart is weary. The last war left us with nothing. The most terrifying thing is the news that [war] may erupt again,” she said.

Khristo refused her daughter’s persistent demands to come live with her in Canada. “There is no place in the world like Gaza. I love Gaza and I will never leave it. I will not go to Canada and spend the rest of my life on a balcony wishing that someone might drop by and say hello.”

In the front square of the church, Salam Najjar, 16, and Dalia Abu Nusaira, 17, are loudly engaging in friendly girl talk. Dalia is discussing her new clothes while Salam is expressing her satisfaction with her hairdo.

They were surprised when Al-Monitor inquired about their impressions. They said they were happy and wished that festivities would be seen on the streets and not only within the confines of the church. They both noted the increased number of Muslims celebrating Christmas.

A scout parade was supposed to be performed; however, as scout member Madeleine Abu Daoud lost her battle to cancer, the parade was canceled out of respect for her death.

Jaoudat Mikhael, 22, spoke of Abu Daoud: “We all remember her. We will not perform the parade this year. She was with us during rehearsals. We always remember the big tree that the Palestinian Authority used to light up in the Garden of the Unknown Soldier, but nothing is as it was before. Everyone has left Gaza, especially after the war.”

Nearby, the Latin Convent was being decorated. This Orthodox church served as a refuge for hundreds who fled the Shajaiya neighborhood during the war. The church was preparing for Jan. 7, when the world’s Orthodox churches celebrate Christmas. Residents enthusiastically rushed to take a look at the lit trees.