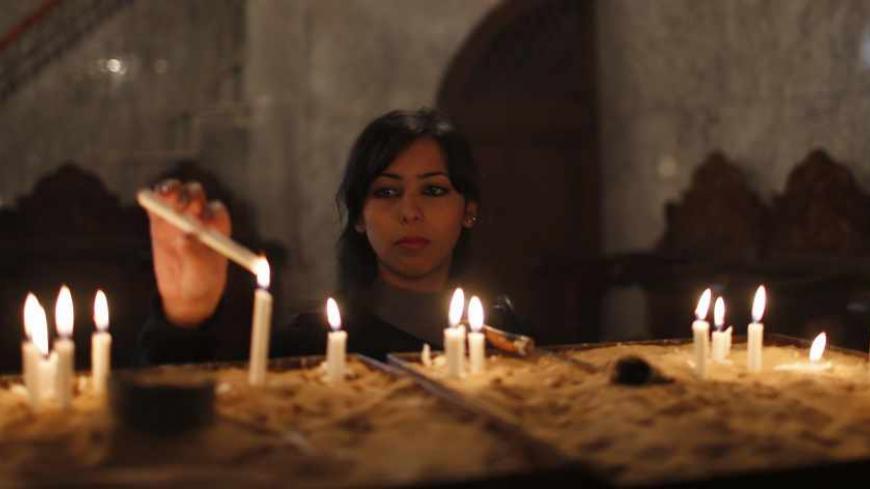 A Palestinian Christian lights candles as she attends a service in St. Porfirios Church in Gaza City, Dec. 22, 2013. - REUTERS/Mohammed Salem

Suzy al-Najjar, Samer al-Salfiti and their daughter, Judy, gazed longingly at the Christmas tree being lit by Bishop Alexius, the pastor of the Greek Orthodox church, in the presence of dozens of parishioners from the Gaza Strip there to celebrate the lighting of the Christmas tree on Dec. 22.

Suzy, 22, and Samer, 30, wished that they could travel to Bethlehem and spend Christmas there. Suzy told Al-Monitor, “We were hoping to spend Christmas at the Church of the Nativity. But this seems impossible. There is very little festive spirit here in Gaza because of the economic situation and the limited scope of celebrations.”

Two weeks ago, the couple applied for permission to travel through the Beit Hanoun (Erez) crossing, but their application was rejected by the Israeli occupation forces. Samer told Al-Monitor, “It is every Christian’s dream to spend the holiday in Bethlehem. Geographically, we are very close to the city, yet it is impossible to go there.”

The Israeli authorities impose conditions that prevent Christians between 16 and 35 years of age from leaving the Gaza Strip for West Bank cities to pray, celebrate religious feasts or visit relatives.

Jabr el-Jaldeh, who is in charge of the Gaza Greek Orthodox Church’s religious relations, told Al-Monitor that over 6,000 Christians of all denominations submitted requests for travel permits to Bethlehem through the West Bank Patriarchy. Some received permission to do so, on condition that they return by Jan. 9. Jaldeh noted, “But 214 applications were rejected for people whose age ranges between 16 and 35.”

Christians in Gaza number approximately 1,500, most of them Greek Orthodox. It should be noted though that their numbers in the mid-1990s exceeded 5,000.

Suhair Saba, 65, was granted permission, but she will most probably not go because, as she said to Al-Monitor, “The weather is cold. And after the storm, the road through Erez is difficult to cross and has many potholes. It will be difficult for me to traverse it.” She also complained about new instructions being disseminated to travelers, forbidding them from carrying sweets, thyme or peppers as gifts.

Despite complaints from the majority of Christians that festivities were dull and devoid of joy in the midst of a Muslim majority led by a theocratic government, Gaza veered away from previous norms as some stores were decorated with bright Christmas trees and Santa Claus cutouts.

Also, despite the scarcity of places to celebrate, the lighting of the Christmas tree and the many gifts donated by the Palestinian Jawwal cellular communications company to the Orthodox Church added a lot of glee this year. That evening, children came with their families to receive gifts with their names on them. Judy, Samer and Suzy’s daughter, received a present appropriate for her young age that taught her the names of the days of the week.

The slightly older generation of children impatiently wait for Jan. 7 to come, when they will break their fast from dairy products. Friends Siraj, 20, Bashar, 20, and Majdi, 21, jokingly told Al-Monitor that chocolate was the most important ingredient of Christmas festivities. They also wished that the years would pass quickly, so that they might go to Bethlehem again. Their last visit there was seven years ago.

Rawan al-Khoury, 21, revealed to Al-Monitor that in an unprecedented move, a group of young people had decided to submit requests through the Patriarchy and human rights organizations for permission to travel to Bethlehem. Khoury said, “It is unfair to have to wait for more than 10 years to be able to go there and be with our families.” She pointed out that it is impossible to travel through the Egyptian Rafah crossing to the West Bank as long as their identity cards contain the word "Gazan."

One of those young people was Abdallah Jahchan, 28, who said, “We submitted applications as a youth group to the Patriarchy, so that it may help us leave Gaza to visit Bethlehem. But our hopes were dashed by Israeli rejection of all our applications.”

He further explained to Al-Monitor that he is counting the days until he reaches the age when it is permissible for him to leave Gaza, since most of the young people have no hope for the future, are unable to find jobs and live in a deteriorating economic situation.

Bishop Alexius sat in front of the Christmas tree on an ornate chair, receiving Christmas greetings from members of his parish as they ate sweets and drank black coffee. From the chair, which his black robes completely covered, he told Al-Monitor, “I have lived in Gaza for the past 12 years. I have witnessed all the wars and am now a witness to the harsh blockade imposed on the city and its inhabitants. I ask world powers to permit citizens of the Strip to exit and enter normally; for love is everywhere, but we must see it in our hearts.”

He added that the church submits applications each and every year, but approval is not his to give, and came from the authorities. He believes that the main problem lies in the war between the two peoples, leading to this blockade.

A few feet away stood the Latin Catholic Church, whose members do not exceed 200 in the Gaza Strip. There, too, we found Samer and Suzy, because she is Catholic. Upon seeing Al-Monitor’s correspondent, she laughed and said, “I celebrate the holidays in both churches. On the 25th here, and on the seventh [of January] there. But my daughter follows her father’s denomination and was baptized in the Orthodox church.” Her husband interrupted her and said, “But my next child will be baptized here at the Latin monastery.”

Their daughter, Judy, went to play in the courtyard next to the church. She ran into the arms of Sister Nazareth, whom Al-Monitor asked about the festivities. She replied, “I chose to come to Gaza three years ago. I noticed the plight of Christians here, who are poor and cannot easily exhibit the importance of their holidays.” Despite that, she admitted that she loves Gaza, and had never, in her 22 years as a nun, felt as happy as she does here.

At the same church, once prayers were over, Lisa al-Souri, 20, and her husband, Tarek, 27, came out and expressed to Al-Monitor their disappointment with the festivities in Gaza. Lisa remembered how, in the past, a large Christmas tree was erected and lit at the center of Gaza’s Unknown Soldier Square. She added, “This was eight years ago. Instead of wishing to go to Bethlehem and celebrate there, I wish to celebrate as a Christian here in Gaza with the rest of the people, just as we did in the past.”