An aggressive campaign against Christmas and New Year’s festivities in Turkey last month, including the circumcision of Santa Claus, has sparked fears that deadly attacks on Christians may begin anew. 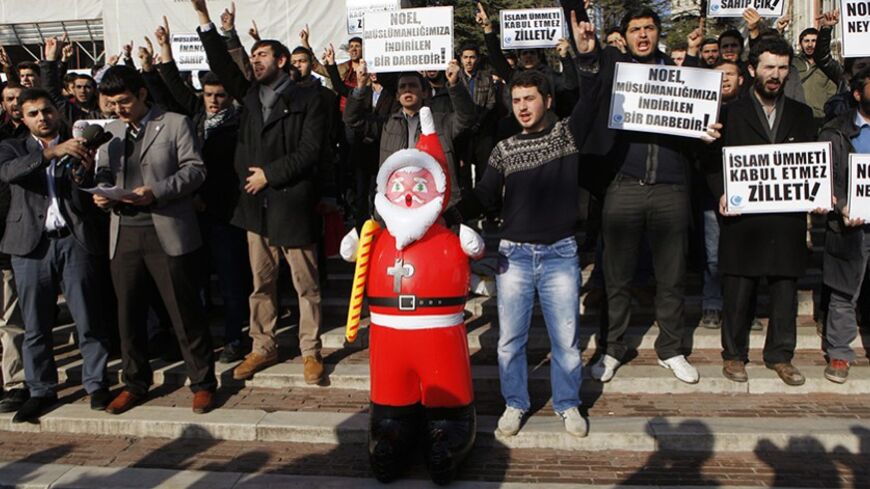 A predominantly Muslim nation, Turkey has occasionally seen anti-Christian campaigns, some with tragic consequences. But the scale of protests against New Year’s celebrations this year was unprecedented. Previously, some Islamic media would denounce the festivities as un-Islamic, but never before have we seen acts threatening those who celebrate.

As fellow Al-Monitor contributor Pinar Tremblay described, members of Turkey’s tiny Christian minority were already depressed, bemoaning the increasingly subdued fashion of their Christmas celebrations and the “long gone memory” of times past, when Christians and Muslims shared holidays.

The events preceding New Year’s Eve — events which were a first for Turkey — added to the gloom. It all started with posters depicting a devout-looking Muslim man punching Santa Claus, hung in various Istanbul neighborhoods. “No to New Year’s and Christmas celebrations,” read the posters. They were part of a campaign led by the Anatolian Youth Association, known to be the youth branch of the pro-Islamic Felicity Party.

The group distributed fliers reading, “We are crying out that the New Year’s and Christmas celebrations held in our country are wrong and constitute a blow dealt to our Muslim identity.” The flier also included the following paragraph: “The adoption and practice of Christmas by Muslims should be regarded as religious and cultural degeneration. One should bear in mind that such behavior is accelerating the process of alienation and estrangement from our own religious beliefs and values, and will breed a favorable ground for Christian missionary activities targeting our country and people.”

The last sentence is particularly noteworthy, since it raises concerns of a possible resurrection of the anti-Christian campaign that plagued Turkey in the 2000s and resulted in physical attacks on Christians.

In 2005 and 2006, almost all national newspapers carried reports targeting Christians, especially missionaries. The paranoia of a missionary invasion spread to such an extent that the National Security Council, where government and military leaders discuss Turkey’s top security issues, classified missionary activities as one of the country’s major security problems. The Ergenekon probe, launched in 2008 to investigate mainly alleged coup plots, revealed that the anti-missionary campaign was waged in a systematic fashion by a faction within the Ergenekon organization.

The anti-Christian campaign at the time resulted in verbal and physical attacks on hundreds of Christians and churches across Turkey. The 2006 murder of Catholic priest Andrea Santoro in Trabzon, the assassination of ethnic Armenian journalist Hrant Dink in 2007 and the slaying of three Christians in Malatya the same year were no doubt closely related to the campaign.

In a country where Christians have suffered such bloody attacks so recently, the launch of a fresh hate campaign against Christianity and Christians has undoubtedly fueled anxiety among Turkey’s religious minorities.

The Santa-punching posters were followed by a Dec. 26 demonstration at Istanbul’s Beyazit Square, which raised further alarm. Members of the same association performed a “circumcision” on an inflatable Santa Claus and then stabbed the doll, while shouting chants against New Year’s and Christmas celebrations.

Interviews with Turkish Christians, published after the incident in the bilingual Turkish-Armenian weekly Agos, illustrate the serious worries sparked by the demonstrations.

Bishop Sahag Masalyan, for instance, voiced fears that the stabbing of dolls could turn into real attacks. “A handful of Christians are left in this country, and such incidents naturally cause fear. The demonstrations are worrisome. The people who stage them today may attack a person clad in a Santa Claus costume tomorrow. It’s like a rehearsal,” he said. “Many people dress in Santa Claus costumes at shopping malls and amusement centers. Some deranged types or fanatics may attack them. The savage murders of missionaries took place in the wake of similar hate campaigns.”

Krikor Agabaloglu, pastor of the Gedikpasa Armenian Protestant Church, suggested that Christianity as a whole was the target: “They circumcise and stab Santa Claus. Who do they have in mind when they stab Santa? That’s the first question to be asked. What we celebrate as a Christmas holiday is the birth of Jesus Christ. If they have Jesus in mind when they stab the Santa effigy, that’s truly thought-provoking.”

And this is how Ihsan Ozbek, a Protestant, described the demonstration's impact on him: “To see people circumcise and stab an inflatable Santa Claus doll in 21st-century Turkey out of enmity for Christianity is terrible and horrifying. I hope their future demonstrations will be of higher morals.”

While many in Turkey are put on trial for “insulting religious feelings” after allegedly ridiculing Muslim values, no judicial action is being taken against acts of open incitement against Christians, and a blind eye is being turned to hate speech targeting Christians. This contrast is stoking concerns.

Marred by aggressive protests for the first time, the 2013 New Year’s Eve in Turkey has thus entered the records as a doubly special date.