How to revive the Arab Peace Initiative

Representatives from Israeli and Palestinian civil societies, together with neighboring and Western peace activists, gathered in Antalya to contemplate ways of promoting the Arab Peace Initiative. 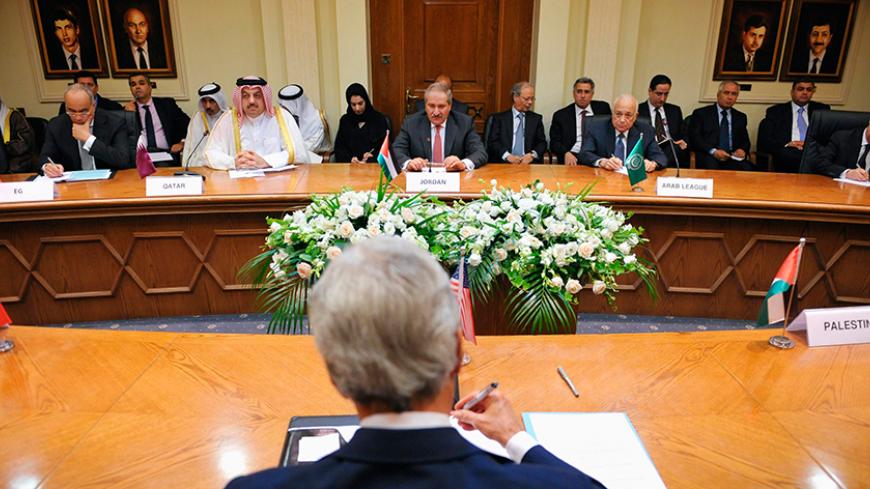 US Secretary of State John Kerry (back to camera) meets with representatives of the Arab League Peace Initiative at the Ministry of Foreign Affairs in Amman, July 17, 2013. - REUTERS/Mandel Ngan

The few Russian tourists who visited the Grand Park Hotel in Antalya, Turkey, on Dec. 17-19, despite the tensions between Moscow and Ankara, could not have known that the women and men conversing easily at adjacent tables represent an occupier and the occupied. Anyone following the deterioration in the Israeli-Palestinian dialogue would have found it hard to believe that these men and women came to Antalya to look together for ways to save the two-state solution, using the Arab Peace Initiative. After breakfast they took their places around a long rectangular table in one of the meeting rooms.

Next to them at the table were also two Knesset members from the Zionist Camp and one from the Meretz Party. Present, too, was a former member of the Palestinian Cabinet, clerics from the Gaza Strip and East Jerusalem, a senior Arab League diplomat and three other diplomats — an American, a European and a Turk. For participants to express their views freely, the hosts from the API Regional Network asked everyone to avoid publicizing each other's names and quoting them directly. Therefore, the insights from the conference will not be attributed to specific participants.

The first insight: The 2002 Arab Peace Initiative is in force. It is likely to be ratified at the upcoming 2016 Arab League conference in Morocco in March. Despite Israel’s refusal to adopt the initiative and to even discuss it, important Arab states — led by Egypt and Saudi Arabia — are still on board and are unwilling to amend its principles. Nonetheless, in light of the instability in Syria and uncertainty regarding its future, implementation of the article about normalizing relations with Israel in return for its withdrawal to the 1967 border lines is not conditional on its withdrawal from the Golan Heights. Suffice it for Israel to adopt the principles of the initiative — along with its willingness for land swaps in the West Bank and East Jerusalem — to launch steps for the normalization of ties with states such as Saudi Arabia.

The Arabs find it hard to understand why such a generous peace initiative is unable to capture the hearts of the Jewish-Israeli public. Among the centrist and left-wing Zionist parties there is a broad consensus in immediate recognition of the establishment of a Palestinian state, based on the June 4, 1967, lines. There is agreement that Israel must accept its responsibility for the refugee problem, including that of the 1948 refugees uprooted from their villages and lives in Israel, and toward efforts to resolve it — without full implementation of the right of return. According to the views of the Zionist Camp and Meretz representatives, dramatic gestures the likes of the Jerusalem visit by late Egyptian President Anwar Sadat in 1977 will make it easier for them to sell the initiative as part of a made-in-Israel diplomatic plan. Nonetheless, in their view, the road to regional peace goes through the ballot boxes. For a leader to implement a policy toward a comprehensive arrangement and an end to the conflict, the leader must convince the public that handing the West Bank over to the Palestinians will not turn it into a second Gaza. Therefore, it is essential to establish a regional-international security mechanism that will reduce the threat of a hostile takeover of Palestine by Hamas or other external forces.

Second insight: A US diplomatic initiative is unlikely in the short time left to President Barack Obama in office, including the transition period between the elections and the new president taking office. At best, as far as the peace camp is concerned, Obama will abstain from a US veto on a UN Security Council vote granting full recognition to an independent Palestinian state. Washington has already indicated to the Palestinians that US aid to the Palestinian Authority would be suspended if they appeal to the United Nations. The American representatives believe that in 2017 — the new president’s first year in office — he (or she) is not expected to focus on defrosting the Israeli-Palestinian peace process.

Third insight: Europe is increasingly frustrated with Israel’s promotion of the settlement enterprise at the expense of the basic rights of the Palestinians. The sharp, almost rude language of the Israeli reaction to the EU decision to label settlement products increased the fury in European capitals. Even Germany, considered the protective shield of the right-wing Israeli government vis-a-vis the European Union, decided to implement the decision. Two new initiatives are being formulated these days in the EU, regarding the settlements. One, to avoid meetings with Israeli politicians who live in the occupied territories, such as minister Ze’ev Elkin and Knesset member Avigdor Liberman. The other, to ban the entry of settlers to EU member states, by a law requiring Israelis to ask for a visa ahead of the journey. This way, EU authorities could verify exactly where the applicant lives.

Several European states are trying to fill the vacuum left by the United States in the Israeli-Palestinian arena. The French Foreign Ministry is trying to line up support for a European diplomatic initiative to promote recognition of a Palestinian state along with a formula expressing the Jewish identity of the State of Israel. At the same time, Spain is seeking support for an international conference next year, marking the 25th anniversary of the Madrid Conference (1991). That conference brought together representatives from Arab states, Israel, the United States, Russia, Europe, China, Japan and the UN, and launched talks (that proved fruitless) between the government of Yitzhak Shamir and the Palestinians, Jordan, Syria and Lebanon. At the same time, plans are afoot to renew the activity of the five multilateral committees created as a result of the conference on the issues of arms control, economic cooperation, refugees, water and the environment.

Fourth insight: The Arab Peace Initiative serves as a common denominator for discourse among Muslim clerics and Jews. Serious peace talks, based on the Arab initiative, will help religious Muslim and Jewish elements to deal with radical religious organization taking advantage of the hostility toward the occupation and turning the political conflict into a religious war.

And a final insight: Now of all times, when the diplomatic process between Israelis and Palestinians is at a deadlock, and when no solution can be seen on the horizon, such ongoing encounters between the parties involved in the conflict together with religious figures and central international elements, are of outmost importance.The Arab initiative is the most important peace plan to be born ever since the start of the Jewish-Arab conflict. And so, it must be at the center of these meetings. It must not be allowed to die.