Muasher: Obama Should Try To Solve Conflict in a 'Few Months'

In an interview with Akiva Eldar, Marwan Muasher, Jordan’s former foreign minister and its first ambassador to Israel, warns that the failure of the Arab peace initiative will signal the end of the “two-state” paradigm. 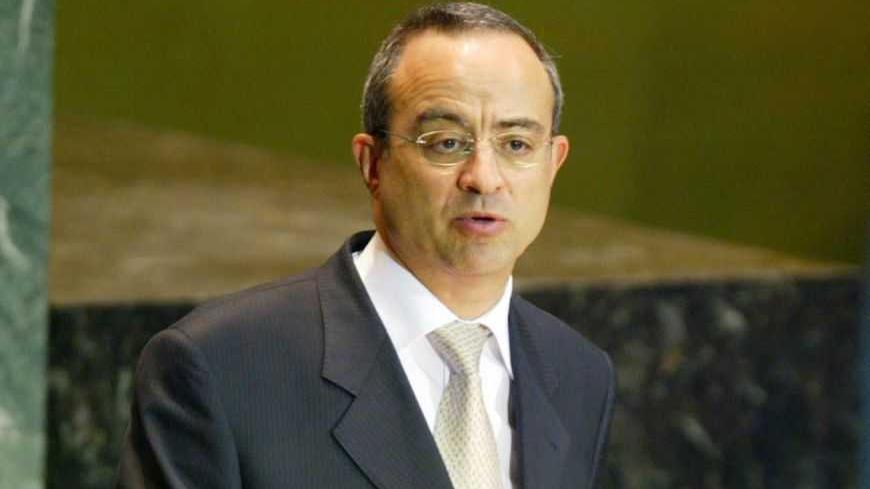 Among reports about President Barack Obama’s intention to restart the diplomatic process, which he will bring with him to Jerusalem and Ramallah on his visit next month, one especially prominent report says the senior visitor plans to pull the Arab Peace Initiative out of his hat. This initiative offers Israel a groundbreaking deal: “in exchange for a complete withdrawal from the occupied territories (including East Jerusalem) and a ‘just settlement’ of the Palestinian refugee problem (based on U.N. Resolution 194), all Arab states will recognize Israel and declare a normalization of relations with Israel.

The surprising regional peace plan, known as “the Saudi Initiative”, took off at the end of 2001, a short time after the September 11th terror attacks.

Those were three days that changed the face of the conflict in the region. On March 27, 2002, Passover eve, a Hamas suicide bomber murdered 30 Israelis who were sitting around the Seder [ceremonial Passover meal] table at the Park Hotel in Netanya. On the 28th, the Arab League summit, convening in Beirut, approved the Arab Peace Initiative. On March 29 the Sharon government decided to launch Operation Defensive Shield, in which the IDF reconquered the towns of the West Bank.

The Arab League decision, as well as its adoption by the summit meeting of the Organization of Islamic Conference (OIC) which took place in Tehran several months later (Iran abstained), were relegated to the back of the news. The annual reconfirmation of the initiative at Arab summit meetings, even after the Arab Spring, is greeted in Israel with a yawn.

On its way to Beirut at the time, the initiative stopped off in Amman, where it underwent upgrading and remodeling in the hands of Marwan Muasher, who was Jordan’s foreign minister at the time. The man who served as his country’s first ambassador to Israel, where he made many friends, worked day and night to draft the document with the intention of bridging between the aspirations of the Palestinians and Israel’s security interests. Since then he has been promoted to the position of deputy prime minister, and then went off to far-away Washington where he served as vice president of the World Bank, before being named as vice president of the prestigious Carnegie Institute. But wherever he went, Muasher was haunted by frustration and regret at the waning of the initiative, of which he was one of the instigators.

In a special interview with Al-Monitor, Muasher stresses that despite the upheavals in the Arab world, his approach toward the initiative has not changed. But he warns that its failure will signal the end of the “two-state” paradigm.

To what extent (if at all) is the Arab Peace Initiative valid, given that several leading regimes who stood at its cradle are gone?

The API cannot be considered valid forever. It has so far shown its resilience, with no Arab country having withdrawn its support from it. But it cannot be on the table forever. The Arab uprisings have changed the landscape. Egypt will not pursue an active policy to promote the API. Syria is not in a position to do so. And, most importantly, the one Arab leader that can keep the API together, King Abdullah of Saudi Arabia, is sick and old. The time to bring about a permanent settlement to the conflict based on the API has come. Waiting for a better constellation is to wait in vain. Israel’s concern that it better wait for the dust to settle before it moves on peace because of a hostile neighborhood will become a self-fulfilling prophecy if no movement is made to bring about peace in a very short span of time.

Can we learn from the support of the API at the recent IOC conference in Cairo, that the Moslem Brotherhood has decided to adopt this approach, including normalizing relations with Israel?

“I don’t think the new Egyptian leadership will stand against the API. No country has withdrawn its support of the API so far. The question is not whether countries will withdraw their support, but whether they will actively work to implement it. I doubt that Egypt will adopt a proactive policy towards the API now.”

How do you see the linkage between the Arab Spring and the Palestinian- Israeli conflict? Did it make the conflict more central or rather pushed it aside?

“I see many linkages. One is what I mentioned above, in that it highlights the urgency of a settlement now before events make it impossible. Two, I think that the United States policy of supporting change with the Arab world will not be seen as credible if it tells Egyptians or Syrians or Libyans or Yemenis or Tunisians yearning for freedom that the United States supports them but tells Palestinians yearning for freedom that it is complicated. In other words, if the United States wants a new relationship with the Arab world based on support for democratic change and U.S. values, it will face a difficult time if that support excludes Palestinians.”

If the API fails, what will be the new Arab attitude towards Israel and the Palestinian question?

“Emerging governments in Arab countries undergoing transitions will not be as accommodating vis-à-vis Israeli policies in the West Bank and Gaza, and will be more responsive to their streets. I do not think the Egyptian-Israeli or Jordanian-Israeli peace treaties will be abrogated, but the Arab world will be far more critical of Israel at both the official and popular levels.”

It seems that the Saudis, who submitted the API to the Arab league, are losing interest in it.

“The Saudis were hugely disappointed when the API did not receive the attention they felt it should both by the international community (U.S., EU) or Israel. They are also not interested in any incremental steps that in their view have only postponed a resolution of the conflict, but made it more difficult while Israel changed facts on the ground. King Abdullah is also sick and the Saudi transition process has in many ways already begun. Short of a very serious effort by the US administration to convince the Saudis it is serious, not about launching a new peace process but about moving to a resolution of the conflict, the Saudis will not engage in another effort.”

Do you believe that the Arab regimes can do more to "sell " the API to the Israeli public?

“I believe when the API initiative was launched, there was a chance to speak directly to the Israeli public that was not taken. I also believe the Israeli government at that time (under Prime Minister Ariel Sharon) was not interested in the API at all, and did not try to market it to its own public. The current Israeli government does not even see a peaceful settlement as a priority, let alone being interested in the API.”

Is there a real chance to move the Israel-Palestinian negotiations in the old bilateral mechanism, without a regional component?

“The short answer in my view is no. Both sides have needs the other cannot meet on their own. The Palestinians cannot resolve thorny issues such as Jerusalem or refugees without Arab support. The Israelis will argue they need an agreement not just with the Palestinian Authority, but also with Hamas, Hezbollah and Syria. This is the beauty of the API. It provided both sides with the cover they need to make a settlement not only possible, but even desirable.”

As you know, there is a group in Israel that is trying to keep the API alive. Are there similar groups in the Arab side?

“I am not aware of an active Arab group. The prevailing popular view in the Arab world is that, just as Israelis believe, there is no partner on the other side, and that the API has been very forthcoming in offering Israel collective peaceful relations with the whole Arab world, security guarantees with all Arab countries, an end to the conflict, and an agreed solution to the refugee problem. There is a sense of despair on the Arab side that Israel is not interested in a viable resolution to the conflict but seeks a solution that meets its needs, even when it talks about a “nominal” Palestinian state, but not the needs of the Palestinians.”

How do you see the future of the Middle East, including the situation in the West Bank, and the relationship between Israel and Jordan?

“If there is no attempt to affect a two-state solution today, then I see a period of no-solution for a decade or two, in which we will witness more turmoil and bloodshed. The Palestinians, then, will opt for the only possible recourse - asking for equal rights within the state they live in today, i.e. Israel. All other solutions, such as Jordan’s control over the West Bank and Egypt’s control of Gaza, or other variations of this, unilateral disengagement or forced transfers of Palestinians, fall under wishful thinking at best. If there is no two-state solution, the relationship between Jordan and Israel can only get worse, and will heighten Jordanians’ feelings that Israel will attempt to solve the conflict at their expense.”

What would you advise President Obama in advance of his visit to the region?

“I only have one advice. He should either indicate, in deeds not in words, his intention to engage in a serious effort to try to solve the conflict within few months or not say anything at all. Giving the impression that he will start another “endless peace process” will be met not just with skepticism, but also with scorn on the Arab side, and would be counterproductive. "