Prime Minister Benjamin Netanyahu’s announcement on advancing the Likud Party primaries to February 2016 assures him that none of his potential rivals will have enough time to prepare. 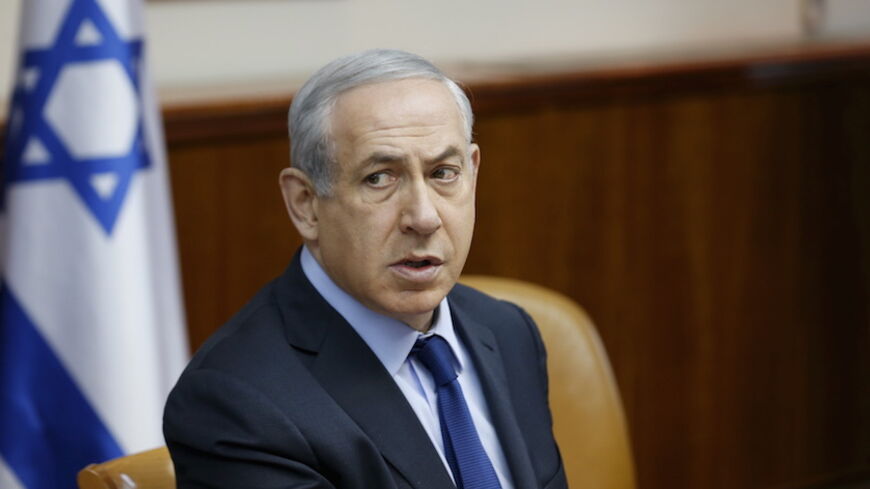 In recent weeks, since Prime Minister Benjamin Netanyahu succeeded in passing the state budget on Nov. 19, he’s been tense and has been mulling over pessimistic political scenarios. Instead of enjoying his big political achievement in passing a budget with a narrow coalition of 61 members out of 120 Knesset seats, and the stability this achievement assures, exactly the opposite happened to Netanyahu: He started thinking about political calculations, as if he had not won an election less than a year ago on March 17.

Senior political sources in the coalition who are close to Netanyahu say that they’ve been astounded at the frenzy and disquiet coming from his direction from the moment the budget passed. In recent weeks, he has begun to plan political moves to entrench his position in the Likud Party and in the leadership of the right. Netanyahu’s goal, according to these sources, is to arrive at the next election standing at the head of a large right-wing bloc, if possible, together with Naftali Bennett, the chairman of HaBayit HaYehudi, and Moshe Kahlon, the chairman of Kulanu, or at least one of them.

What’s strange about the anxieties that have overcome the prime minister is that the last election cycle ended only nine months ago and the opposition is still licking the wounds of its defeat, and it doesn’t seem like it is succeeding at challenging him with a candidate either from within the political system or outside of it. Even the stars of the previous election, Kahlon and Bennett, are not succeeding in getting a footing among the public, according to recent polls, and the chairman of Kulanu has even been significantly damaged politically. Even pugnacious figures in the opposition such as Yair Lapid, the chairman of Yesh Atid, and Avigdor Liberman, the chairman of Yisrael Beitenu, are far from a significant breakthrough, even though their support is on the rise.

In the Likud, despite background noises from the direction of former Minister Gideon Saar and Mayor of Jerusalem Nir Barkat, who are mentioned as possible contenders against Netanyahu for the leadership of the party, there are no signs of a real battle brewing like there was in the past between Netanyahu and Ariel Sharon, the former prime minister who died in 2014. Likud members want to stay in power and will always prefer the person who can deliver the goods. Right now, that’s Netanyahu.

And what’s happening outside the political system? Every so often, in polls as well, the names of former Chiefs of Staff Benny Gantz and Gabi Ashkenazi are mentioned, as well as that of Tel Aviv Mayor Ron Huldai, as candidates to lead the left-center bloc in the next election. Netanyahu has been following this with concern, but even here there are no actual threats right now: Not one of these figures has shown signs of jumping into the political waters. Even the wave of terrorism, which has continued since October and doesn’t seem to be slowing down, isn’t hurting the position of the chairman of the Likud.

Instead of enjoying the political calm and the stability of the coalition and using his fourth term as prime minister to make big moves in the economic and diplomatic arenas, Netanyahu chooses to act as if the election is an urgent and pressing matter. He’s already making practical preparations to run for his fifth term.

The political system, in general, and the Likud, specifically, have never seen this pattern of conduct by such a strong prime minister who is not threatened and who controls all of the areas of political power, including personally holding a large number of ministerial portfolios (the Foreign Ministry, Communications, Economy and the Ministry for Regional Cooperation). He neutralized the chairman of the Likud Central Committee, Danny Danon, by appointing him Israel’s ambassador to the UN. Thus, Netanyahu prevented Danon’s plan to pass a decision in the party’s central committee that would demand a special majority in the party to authorize the candidacy of a person wishing to run for prime minister for a third time.

This frame of mind forms the background for Netanyahu’s latest political move, which emerged from the prime minister's residence on Balfour Street in Jerusalem the night of Dec. 19: an attempt to move up the primaries for the leadership of the Likud to February 2016. The immediate goal is to block Saar and Barkat, so they won’t have time to prepare for an election in two months. Likewise, it’s a veiled threat from Netanyahu to Minister of Transportation Yisrael Katz, who has recently shown signs of political independence. In other words, the prime minister seeks to assure his control over the Likud until after the next election, which is planned to take place in 2019.

Netanyahu has already done this successfully three times, beginning in 2007. Silvan Shalom, the minister who announced on Dec. 20 his retirement from political life following claims of sexual harassment, planned to run against him for the leadership of the Likud in 2007. Shalom was astounded by the surprising announcement from the chairman of the party that the primaries were to be moved up. At that time, Shalom called a press conference where he compared Netanyahu’s rule to that of the Baath regime in Syria.

This time as well, Netanyahu’s move has caused a storm in the Likud and touched off the anger of Saar and Katz. Saar, who in recent weeks has frequently appeared in the media criticizing Netanyahu’s conduct in the face of the wave of terrorism and has some tail wind from several journalists, was caught unprepared. A short time after the move was announced, he attacked Netanyahu on Twitter: “Hard to believe that in the midst of a wave of terrorism, on a day that it hits Raanana [a town north of Tel Aviv where a terror attack took place Dec. 19], the prime minister is busy with small-time politics.”

Saar’s timing wasn’t really great. The morning brought news of the killing of a senior Hezbollah commander, Samir Kuntar, in an air attack in Syria — an act that is being attributed to Israel. Allegedly settling the score with one of the most well-known and hated terrorists, who killed three family members in Nahariya in 1979, gave Likud activists the sense that the prime minister does actually have time to deal with important matters. In general, Likud members don’t appreciate anyone from within the party who challenges a sitting prime minister. One got the sense in internal WhatsApp groups and responses on Twitter that Saar scored an own goal with his tweet.

Barring any surprises, on Feb. 23, 2016, Netanyahu will once again be elected chairman of the Likud, successfully blocking any potential rival from within the party through creative political maneuvers. On the one hand, a situation where a party can’t manage to produce a leadership alternative in 10 years should worry its members. On the other hand, since 2009, Netanyahu has brought the Likud into power time after time, through ad hoc political connections and alliances, once with Liberman and once with Bennett. According to his present plan, after he’s elected chairman of the Likud again and gains some quiet at home, he’ll be free to form the political alliances for the next election — the alliances that would promise him a fifth term as prime minister.