To preserve his absolute control over the party, former Prime Minister Benjamin Netanyahu is campaigning to remove from the party thousands of more liberal members. 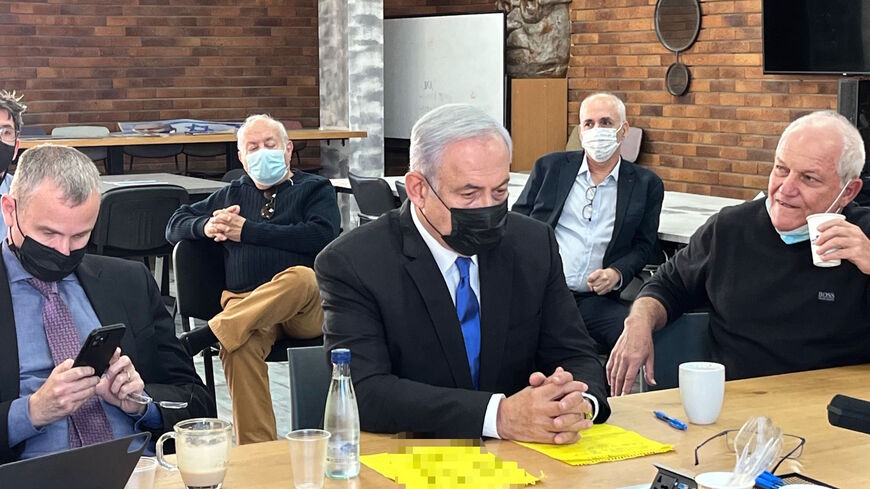 The Likud’s internal court convened Dec. 19 at the party's Tel Aviv headquarters. In an unusual step, former Prime Minister Benjamin Netanyahu, who also heads the Likud, arrived there to participate in the proceedings. Evidently, he had a war to win, and he wanted to be there in person to be sure of the result. At stake was Netanyahu’s campaign to remove several thousand members who had joined the party rather recently.

The former prime minister did not make do with just being present. His "show" included Netanyahu banging on the table, raising his voice and alluding to a disaster waiting in the wings. In fact, these images of Netanyahu banging on the party headquarters' table like any other political wheeler-dealer seem light-years apart from the pictures of the statesman and leader who signed only a year ago the historic Abraham Accords on the White House lawn. The change is amazing.

Netanyahu could have sent another high-ranking Likud member to represent him at the party’s internal court, but apparently it was important to him to make a personal appearance and ensure that the task was being implemented. Of course, he was also sending a message to rivals inside the party and outside of it — that he isn't going anywhere.

Still, in order to understand the campaign Netanyahu suddenly embarked on, we must understand what was at stake. A few years ago, a group formed in the Likud, calling themselves “the new Likud members.” Their agenda was to return the party to its old values — to honesty and integrity (which they claimed was destroyed by Netanyahu). The group became more popular over time and succeeded in drawing in several thousand new members, perhaps even between 7,000 and 12,000. They became an organized force that participated in the internal elections for electing Knesset members and the heads of the list.

However, during this period it became clear that many of them had actually voted for left-center parties and didn’t try to hide it, talking about it on social media. In this way, they took advantage of the fact that the Likud used democratic means to influence them from the inside. Simultaneously, Netanyahu himself began to use political instruments to get rid of this clique, calling them a “fifth column” or “Trojan horses.” He claimed that they infiltrated the Likud dishonestly in order to change it from within.

To Netanyahu’s great disappointment, the Likud’s court ruled against disqualifying with one swoop thousands of party members. Instead, the court said that each case/each individual must be checked privately, to determine whether or not the person had operated against the Likud principles. Of course, this would involve a long process, and it would be difficult to carry out.

Hearing this ruling, Netanyahu became very angry, and targeted one of his close associates — former Finance Minister Israel Katz, who is heading the Likud Secretariat. Netanyahu accused Katz for this ruling and argued that Katz should have used his influence over the court, and publicly wage war against the new Likud members. Katz refused, and this immediately put him under suspicion of helping to destroy the Likud “from the inside” so as to receive their support in the primaries.

Netanyahu would not accept the decision of the court. With two former high-level Likud ministers at his side — Chaim Katz and Yariv Levin — Netanyahu filed Dec. 26 an appeal against the ruling. In an agitated speech before the court, Netanyahu defined the new Likud members as an extremist left-wing group that wormed its way into the party like a Trojan horse, with the goal of destroying the Likud movement from within. “We see a danger to the existence of the Likud and that makes it a danger for the country. … I am going all the way with this, because I am not ready to concede this party, which is the future of this country,” Netanyahu told the court.

It is still unclear how Netanyahu’s war will end, but meanwhile he has faced much ridicule and contempt from his rivals and opponents in the political system, such as Justice Minister Gideon Saar, a former associate of his.

On the other hand, Netanyahu has sweeping support of the Likud voters. That is the one thing that is important to him now, since his political existence hangs on this group only. In fact, this electoral war that he is waging is his way to demonstrate to his followers that he is fighting for their common political home against hostile takeovers.

Netanyahu’s battle to preserve his control over the Likud includes also another front, which is politically eliminating potential Likud leadership rivals. In the framework of these efforts, he is now focusing on preventing senior Likud member Nir Barkat from using his personal wealth for campaigning inside the party.

As a reminder, Israeli law prevents candidates in party primaries from using personal financial resources to fund their own campaign. The law stipulates specific limits on contributions made by individuals for such causes. On the other hand, before the primaries, there is no law preventing any such move.

Former Jerusalem Mayor Barkat is the wealthiest politician in Israel, who made a fortune with high-tech companies. He is not hiding his ambitions, and is ready to harness his wealth to achieve these ambitions. In fact, over the past few months, Barkat has been spending money with this goal in mind, establishing himself in the Likud and making himself popular with the general public. Recent surveys place Barkat as Netanyahu’s top Likud rival, revealing that he is advancing in the public image. Were he to head the Likud, he may be able to win 29 Knesset seats. At this point, Netanyahu still has an edge in the polls over him, but Barkat will surely argue that Netanyahu still won’t be able to cobble together a coalition, much like he failed in the last elections.

Faced with Barkat’s rivalry, Netanyahu is certainly not sitting on his hands. Former Minister David Amsalem, a close associate of Netanyahu, recently submitted a bill that limits the sum of money that an elected official and his family can collect in fundraising for political activity, to 100,000 Israeli shekels ($32,000) a year. The law has been dubbed the “Barkat law” because people view it as targeting Barkat personally.

On Dec. 27, the Knesset ministerial committee approved the bill, which is expected to be brought up for a preliminary Knesset vote already on Dec. 29. Clearly, Netanyahu is not wasting any time in his battle on both fronts.