Is a new approach needed in the war on IS in Iraq?

Although achievements have been made on the ground and the Islamic State suffered setbacks, military experts believe other measures should be taken to completely eliminate the organization in Iraq. 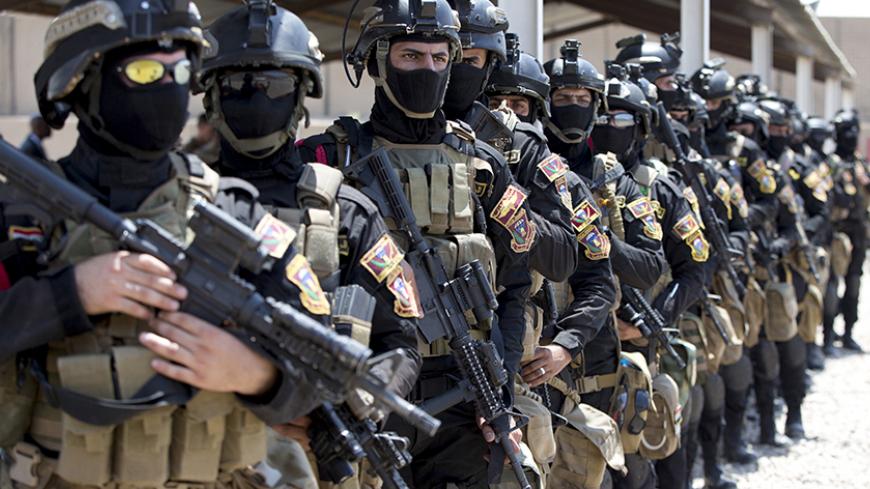 Iraqi counterterrorism forces participate in a training exercise with the US Department of Defense as part of the campaign against the Islamic State, Baghdad, Iraq, July 23, 2015. - REUTERS/Carolyn Kaster

The Islamic State’s control over large swaths of land in Iraq and Syria is slowly diminishing, as it is being aggressively pummeled by local and international forces, such as Kurdish and Iraqi forces on one side and coalition forces on the other. However, more can be done, say experts and combatants engaged in the war against the terrorist organization.

The war on IS launched by the US-led coalition in Iraq in September 2014 yielded positive results, with the organization losing 14% of its territory as of Dec. 14, according to estimates by the IHS Conflict Monitor team.

In spite of successive defeats with the loss of the city of Tikrit, the contested Beiji refinery complex, the transit route connecting Mosul to the city of Raqqa in Syria, and most recently Ramadi, the organization is far from being destroyed. “IS has had debilitating setbacks from a military perspective,” retired Col. Harry Schute, consulting adviser to the Kurdistan Regional Government (KRG) on security affairs, told Al-Monitor.

IS has shifted to a defensive position, as stated in a report Dec. 21 by the Institute for the Study of War. The report underlined that IS had launched spoiling attacks across Iraq on multiple fronts, in Beiji, Makhoul and Sinjar in northern Iraq, as well as Hit and Ramadi in western Iraq. The organization has led “diversionary and probing attacks near Tikrit, Samarra and Fallujah, to forestall any upcoming anti-IS operations elsewhere in Iraq and force anti-IS forces shift resources to re-secure targeted areas,” as per the same report.

Front lines in Iraq have been marked by a movement of ebb and flow, more specifically in the contested sector of Beiji, which changed hands several times in the last year. Experts say that to avoid a reversal of IS losses, new measures should be introduced, some of which are already under discussion or have started being implemented.

“The [US-led] airstrikes are very helpful, but they can be more effective if tactical controllers played a more active role in the choice of targets,” Schute said. Basically, a controller deployed in the vicinity of the target would be communicating directly with the pilot and giving final guidance on the strike. These controllers are generally embedded with the Internal Security Forces or KRG forces at forward locations to direct close air support, which greatly improves the coalition’s airstrikes. An opinion, also shared by Kurdish Gen. Sirwan Barzani, who told Al-Monitor that the operation center having to approve the strikes created delays, which could have costly repercussions on the battlefield.

An American military expert speaking to Al-Monitor on condition of anonymity believes the second measure would be to change the current Rules of Engagement (ROE). The expert said that the anti-IS coalition was currently following very strict ROE when it comes to targeting IS, which are equivalent to a zero-fault approach. “IS is acting like a state, we cannot maintain a zero-fault approach with a conventional opponent. The current ROE should follow a risk-averse strategy instead in regard to collateral damage. We cannot treat people who are openly collaborating with the organization [IS] as innocent civilians,” the military source said.

The third measure would be to increase the number of foreign fighters deployed in Iraq.

Most military figures agreed that the number of foreign fighters training and assisting local forces, such as Iraqi and Kurdish forces, should be increased. Currently, the United States has some 3,500 troops in Iraq, mostly working as advisers and trainers for the country's security forces. According to Centcom, coalition troops from Italy, the United Kingdom, the Netherlands, Germany, Norway and Finland have also trained approximately 2,500 peshmerga soldiers at the Kurdistan Training Cooperation Center since January.

The Combined Joint Force Land Component Command in Iraq has trained more than 11,000 Iraqi security force personnel since January. Kurdish MP Ari Harsin, who is fighting IS with the peshmerga forces, told Al-Monitor that NATO should have a permanent base in Iraq, which would guarantee that “the IS experience would not be repeated.”

However, Hadi al-Ameri, the powerful leader of the Badr forces in the Iraqi Popular Mobilization Units, threatened in a statement Dec. 7 to attack any new US base in Iraq.

A fourth recommendation was that coalition forces need to be more involved in the advising process, not just at the sector division level but also at the brigade level, Schute said. An opinion submitted by retired Gen. David Petraeus on Sept. 22 to the US Congress, in his first testimony since resigning from the CIA, advocated a beefed-up military intervention in Syria and Iraq. Petraeus said that US adviser elements should be integrated “to the brigade headquarters level of those Iraqi forces fighting IS.”

Other military efforts include stepping up direct action by special operations against high-value targets similar to those recently in Hawija and in Syria, Schute added.

Special commandos would be used in assassination missions targeting IS leaders, rescuing hostages and intelligence gathering. These troops would also be engaging in raids that amount to combat operations.

The Rudaw Kurdish news site reported Dec. 26 that joint Kurdish and US commandos stormed an IS court in the town of Riyadh east of Hawija, where they captured and killed a number of militants, including Hussein Umair Assafi, a commander of the radical group.

A similar operation in Hawija in October freed 70 hostages from a prison. In May, a US commando led a special operation that targeted IS financier Abu Sayyaf, who was killed in the firefight in a raid at al-Omar, in Syria.

A final priority for Harsin is training and equipping bomb squads within the Iraqi and Kurdish forces that would support the advance of ground forces. IS has heavily booby-trapped cities it occupied, such as Tikrit and Ramadi, slowing the advance of Iraqi forces and rendering it a perilous exercise.

For Harsin, the "most dangerous kind" are bombs detonated by remote control, as IS militants wait in the vicinity for would-be victims. “They watch you and detonate the explosives once the bomb squad gets close. Creating and equipping anti-bombing squads with proper gear is thus a necessity,” Harsin said.

The fight against IS could be significantly improved and become more effective by adjusting the military approach, the experts believe. Introducing new measures could speed up the outcome, and possibly the settlement of the conflict.