Will Iran support the intifada?

After relations took a hit from the Syrian civil war, Hamas leader Ismail Haniyeh has reached out to Iran for help. 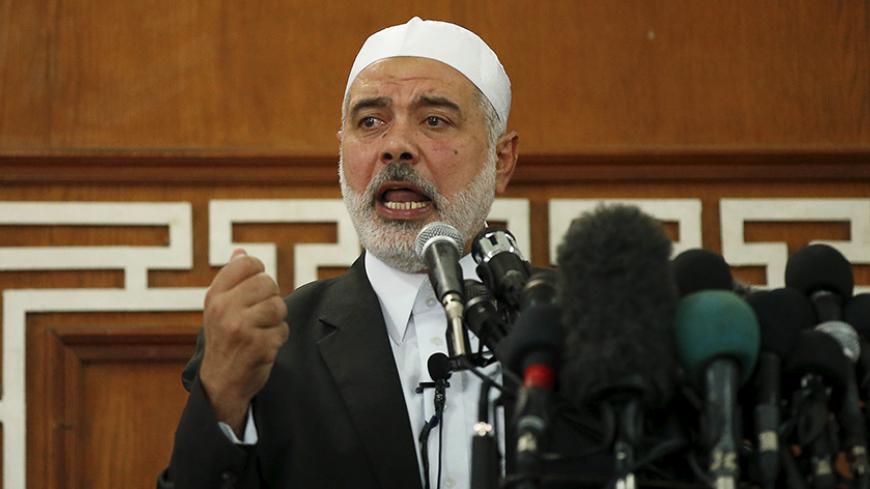 In a video message addressed to the Iranian people and leaders, the deputy chief of Hamas' political bureau, Ismail Haniyeh, asked for support against Israel. The video comes at a time when during the last 2½ months knife stabbings by Palestinians and shootings by the Israeli military have so far resulted in the deaths of 19 Israelis and 106 Palestinians. The video also comes as a surprise given that relations between Iran and Hamas have soured over the Syrian civil war, and even scheduling a meeting between the two has been an impossible feat.

In the three-minute video shared by Raja News, Haniyeh attempted to convince Iranian leaders the current unrest by mostly unorganized Palestinian youths is indeed a third intifada. “From the holy land of Palestine, from Jerusalem, to the Muslim and brotherly nation of Iran, I state this intifada is blessed, this intifada is sacred,” he said. “From the scenes at Al-Aqsa Mosque, it has taken shape from the spirit of faith, the spirit of jihad and the spirit of resistance.”

He continued, “I realize the place Jerusalem and Palestine have in the hearts of the people and for the leader of Iran. In this message I invite the people of Iran and Arab and Islamic nations for the strategic support of our great intifada, so that the intifada continues, and can confront plans and accomplish our goals of supporting Jerusalem, Al-Aqsa Mosque, and stop the excessive demands of settlers and liberate our holy land and our people.”

Haniyeh said, “Brothers and sisters, the great nation of Iran, today we know the important place that Palestine is to the leader of the Islamic Revolution, the administration, parliament and the people of Iran. And we know how great and holy Palestine is to you dear ones — that is why this intifada will continue.”

Up until the Syrian civil war, Hamas was considered to be part of the “axis of resistance” along with Shiite Iran, an Alawite-led Syrian government and Shiite Hezbollah. Hamas, a Sunni group, left Damascus for Doha after attempts to mediate between the Syrian government and Sunni opposition forces failed. While Iran has continued to support Hamas' military wing, Izz ad-Din al-Qassam Brigades, political relations between the two have been cold. There have been various reports that the head of Hamas’ political bureau, Khaled Meshaal, would travel to Iran to address differences and repair relations. However, for unknown reasons the trip has been postponed.

However, there have been signs recently that Hamas is attempting to repair relations with Iran. After it was confirmed that Iran’s former ambassador to Lebanon, Ghazanfar Roknabadi, had died in the Mina stampede during the hajj in Saudi Arabia in September, a Hamas representative in Tehran, Khaled Ghadoumi, offered condolences on his “martyrdom.” His Nov. 29 letter read that Roknabadi was a “well-known and popular figure among the Palestinian resistance and Hamas.”

Ghadoumi had also met with Iranian Foreign Minister Mohammad Javad Zarif on Dec. 7, and said there was “a need to develop this relationship” between Iran and Hamas. Ghadoumi praised Iran for taking a “principled position” with respect to Palestine since the Islamic Revolution in 1979. Perhaps alluding to their differences in Syria, Ghadoumi said that this position is “not only a political position and it will not be influenced by side issues.”