A Saudi court has sentenced Palestinian poet Ashraf Fayadh to death on charges of spreading atheism and insulting the Prophet Muhammad. 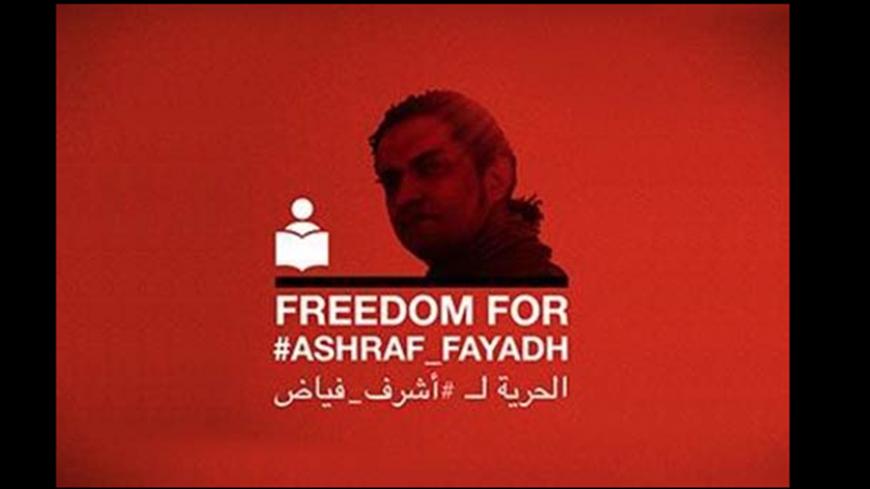 GAZA CITY, Gaza Strip — An art teacher in Saudi Arabia did not believe that a child could draw so beautifully. He hit the child and insisted on knowing who drew it for him. In tears, the child swore that the masterpiece was his. The following day, the boy's father, a Palestinian from the Gaza Strip, went to the school to assure the teacher that it was his talented son who made the drawing.

More than 20 years later, Ashraf Fayadh is being held accountable once again, not because of his drawing, but because of his poetry. His book, “Al-Taalimat Bel Dakhel” ("Instructions Within"), was published in 2008 on his homeland, full of self-reflection and love.

Fayadh, now 32, was accused of spreading atheist ideas and sentenced to death by the Saudi judiciary on Nov. 17.

Fayadh’s sister Raida, 37, told Al-Monitor about the childhood drawing incident and the details of the death sentence during an interview at her house in Beit Hanoun in the northern Gaza Strip.

Raida shared the documents issued by the Supreme Court in Abha on May 25, 2014. They included several charges against Ashraf, including spreading atheism among young people in coffee shops; insulting the divine entity, the Prophet Muhammad and Saudi Arabia; and having pictures of girls he knows on his mobile phone.

According to the documents, the court backed down on imposing the death penalty after Ashraf declared that he had repented. Witnesses testified in his favor and said that he was not atheist. They said that it all started with an altercation between him and a man from the Committee for the Promotion of Virtue and Prevention of Vice, the religious police in Saudi Arabia. Consequently, Ashraf was sentenced to four years in prison and 800 lashes in May 2014.

According to the documents that Al-Monitor reviewed, this ruling was appealed after his repentance (likely a coerced confession of atheism) was deemed more important than the witness testimony. On Nov. 17, he was charged with apostasy and sentenced to death.

His sister explained that Ashraf was first summoned to court by the Committee for the Promotion of Virtue and Prevention of Vice in Saudi Arabia in 2013 on charges of insulting the divine entity. He was acquitted and then arrested again in 2014.

Raida confirmed that Ashraf, her youngest brother, has always been very talented. He draws, writes and makes movies. She said he has even represented Saudi Arabia in many international exhibitions, such as the Biennale art exhibition in Venice in 2013. She pointed out that the family has been living in Saudi Arabia for 50 years and all her siblings were born in the country but have no passports, except for the Egyptian travel document.

The Egyptian authorities had granted travel documents when Egypt started managing the Gaza Strip's affairs in 1956 until the arrival of the Palestinian Authority in 1993. Thousands of Palestinians currently in the Gulf hold these papers, which are not recognized by much of the world, causing them much trouble during their travels.

Asked about Rashad’s poetry book, Raida said it was published by Dar Al-Farabi in Beirut in 2008 and the book only made it to Saudi Arabia through a book fair.

“His contemporary poetry talks about identity, and the court had originally acknowledged that the book was not aimed at spreading atheism,” she added.

As for the concept of prosecuting poets for their work, Gazan author Khodr Mohjez told Al-Monitor, “How could a state worker prosecute creativity and poetry? Is he even qualified to interpret contemporary poetry? He most certainly is not because his standards are not based on literature.”

He added, “In the era of the prophet and the history of Muslim countries, not a single poet was ever tried for their literary creations.”

Raida explained, “The problem started when a Saudi man identified as Sh. A. [in the court documents] started following Ashraf to monitor his moves. Ashraf would always complain about this guy to our sister, who was based in Abha. It later turned out that he was sent by the Committee for the Promotion of Virtue and Prevention of Vice.”

She added, “The man kept following Ashraf until an altercation occurred following a film screening in 2012 — as part of a cinema project called ‘The Secret Cinema’ — during which Sh. A. insulted Ashraf, called him a refugee and a beggar, and threatened him.”

Writer Bandar Khalil, a Saudi friend of Ashraf, told the same story in an article published on Ultrasaw.com Nov. 25. He wrote, “A teenager came to participate in the open seminar we held after the screening of the film. His reproachful discourse was extremely revolting, although his looks were modern. A few months later, this guy tattled on Ashraf and was part of the plot that led him to being sentenced to death.”

He added, “The man was cranky, with an Islamic State-esque irritability. He was an intruder in a world of art and beauty, and he threatened to make Ashraf return to Gaza.”

According to the court documents Raida showed to Al-Monitor, the young Sh. A. was one of the three main witnesses, all members of the Committee for the Promotion of Virtue and Prevention of Vice, who testified against Ashraf.

Khalil explained in his article that the man who managed the case in the Committee for the Promotion of Virtue and Prevention of Vice also worked as an investigator in the Bureau of Investigation and Public Prosecution. “This is a terrible confusion that reveals that there is a state within a state,” he added.

Abdul Sattar always believed in his son’s talent and defended him to everyone, starting with the art teacher. This time around, however, he wasn't there to defend Ashraf, as he died of a stroke this year.

“My brothers and I had decided to hide the death sentence news from our parents, who feel very lonely because of Ashraf’s imprisonment, as he used to live with them and look after them in our house in Abha. However, [my father] received a call from a court employee, who broke the news to him. The shock led him to suffer a brain hemorrhage and to go into a coma on Nov. 18. A week later, he died.”

Raida said that Gaza could not remain idle after the sentence was issued. After all, Ashraf studied at Al-Azhar University in Gaza from 1998 to 2000 before returning to Saudi Arabia. When the death sentence was issued, several writers and activists in Gaza started using the hashtag #FreedomForAshrafFayyad and produced short films to support him.

Intellectuals and writers read his poems during poetry events in Cairo, Tunis, Ramallah and Gaza. More than 2,000 writers signed on Nov. 22 a petition demanding Ashraf's release, and some even paid a visit to his family. There have been international efforts to rescue him, chief among them a petition by Amnesty International.

The PA has only taken meager steps toward intervention, despite the pleas by activists and civil society institutions in and outside Gaza to President Mahmoud Abbas. Meanwhile, a Nov. 27 statement by the Palestinian ambassador to Saudi Arabia, Bassem al-Agha, was quite shocking: “It is neither in the interest of Fayadh nor in the interest of his case to have the issue inflamed; Saudi Arabia shall not be treated with such hostility.”

The statement appears to have a political dimension, given the close relations between Saudi Arabia and the PA. The kingdom is one of the biggest contributors to the PA’s budget.