Not a lot is known about Saudi Arabia's newly announced Islamic Military Alliance, leaving observers to ponder its prospects. 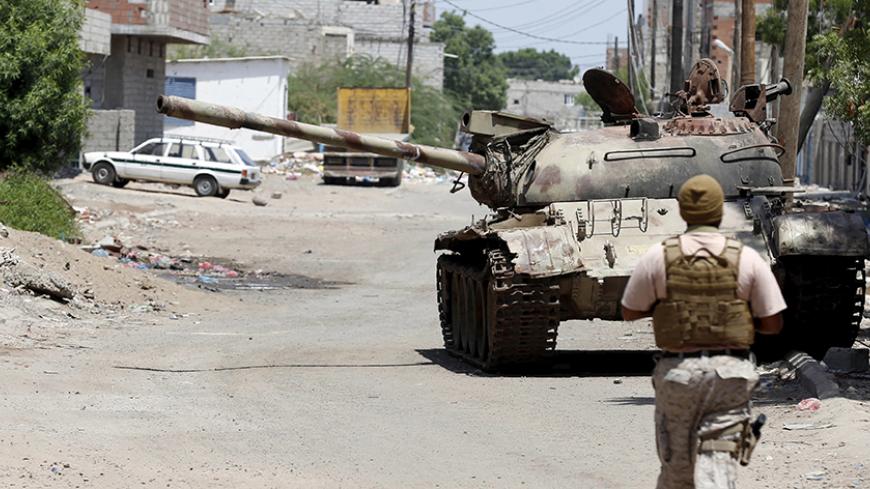 A soldier from the Saudi-led coalition walks past a broken-down tank on a street in Yemen's southern port city of Aden, Sept. 27, 2015. - REUTERS/Faisal Al Nasser

Saudi Arabia's nebulous announcement that it is forming a 34-country Islamic alliance to battle terrorism has raised speculation about the group's true mission.

The clearest aspect of the Dec. 15 announcement was that it was sorely lacking in details. Prince Mohammed bin Salman, the country’s deputy crown prince and defense minister, merely noted that Riyadh is creating the Islamic Military Alliance to fight terrorism in the Muslim world.

While no countries led by Shiite parties — such as Iran, Iraq or Syria — appeared on the list of member states, Salman stressed that the alliance is open to all Islamic countries. That sentiment was reiterated Dec. 19 by Egyptian Foreign Minister Sameh Shoukry in remarks made to the press during the international conference on Syria in New York.

Gen. Anwar Majid Ashqi, head of the Middle East Center for Strategic and Legal Studies in Riyadh, said during a Dec. 15 phone call to Al-Ghad al-Araby channel that Iran is welcome in the alliance if it proves it does not support terrorist organizations. Ashqi said the precondition is necessary "because Western states accuse [Iran] of financing terror.” However, the general neglected to comment on the memberships of Turkey, Qatar and Sudan, despite numerous allegations that they support terrorism.

Most notable among those accusations is the one made by Russian President Vladimir Putin, who explicitly accused Turkey of supporting the Islamic State (IS) by buying Iraqi oil through the organization. On Dec. 2, Russia’s Defense Ministry also claimed Ankara is providing weapons to IS in exchange for oil. Thus, accusations of supporting terror are not confined to Iran alone and have been directed at some states that are actually members of the new Saudi alliance. This could indicate that the sectarian and political disputes between Saudi Arabia and Iran played a role in the alliance's formation.

The alliance may only refuse to accept countries suspected of supporting Houthis in Yemen or those who oppose the operations of Gulf armies against them, such as Iran, Iraq and Syria. However, it was announced that the Islamic alliance includes Lebanon, whose parliament includes many Shiites and is headed by a Shiite politician, Nabih Berri.

It's noteworthy that Lebanon didn't officially object to Gulf operations in Yemen, and Berri criticized Hezbollah leader Hassan Nasrallah for his aggressive statements against Saudi Arabia after the launch of Operation Decisive Storm. Berri has also praised on numerous occasions the important role of Egypt in Arab region, but a final decision regarding Lebanon joining the Islamic alliance has yet to be decided, and the government is divided about this issue.

In another oddity, the very day after the alliance was announced, the foreign ministers of Pakistan and Indonesia said they had not decided whether they would join the alliance — even though Salman's statement had mentioned both countries as members.

Other countries raised questions about the role of the alliance and its members. Malaysian Defense Minister Hishammuddin Hussein said his country supported the alliance ideologically and politically, yet he ruled out any military participation by Malaysia. He stressed that the Saudi initiative does not include any military commitment from members.

Turkish Foreign Ministry spokesman Tanju Bilgic said in a Dec. 16 news conference in Ankara, “I can say that this coalition will not be a military structure. It is not on the agenda. The military and intelligence cooperation in the fight against Daesh [IS] is essential, but there is an ideological dimension of the fight against terrorism. These struggles should be coordinated so that Islam will not be identified with terrorism.”

Yet the day before, Turkish Prime Minister Ahmet Davutoglu had stated that Turkey would provide everything in its power to the alliance, without commenting on whether that would include military support.

Gen. Hisham al-Halabi, a military adviser at Egypt’s Nasser Military Sciences Academy, told Al-Monitor that alliance membership does not require a military commitment, and Riyadh is leaving it up to member states to participate via any means they can.

“This participation, for example, could include providing information or weapons, logistical support, training or financial assistance to the participating armies,” Halabi said, but he denied claims that the group would not be a military alliance. The coalition's primary function, he stressed, will be military in nature.

Egyptian military experts and observers criticized the alliance for including Turkey and Qatar. Most notable among those experts were Abdul Rafaa Darkish and Talaat Muslim, as well as member of parliament Samir Ghattas. In statements made to the press, they said the alliance cannot be serious or effective, given that it includes two states that support terrorism.

Halabi told Al-Monitor that participation in the alliance will reveal states not serious about fighting terrorism. He added that there are no fears about any country providing false information to the alliance, since all data will be investigated by more than one source.

In a Dec. 16 news conference, Russian Foreign Minister Sergey Lavrov said Russia welcomes any efforts to combat terrorism, and he said Moscow is studying the potential impact and role of the alliance. Meanwhile, Putin said he does not expect the alliance to play a role that would affect Russia negatively, even in light of the differing views of Russia and Saudi Arabia concerning the Syrian crisis.

Salman said no military operations would be carried out in Syria without prior coordination with President Bashar al-Assad and the international community. Russia is currently the most influential international force in Syria, in light of the air raids it is conducting against IS and Syrian opposition fighters.

Halabi did not rule out later coordination between the Islamic Military Alliance and Russia against IS. Russia is not a member of the alliance because it is only an observer state in the Organization for Islamic Cooperation. However, Moscow could be a strong partner and ally of the alliance, providing it with informational support, he added.

Moreover, Egypt's membership also suggests the alliance will not antagonize Russia, given that Cairo is currently one of Russia’s most important strategic allies in the Middle East. This is especially true in light of the Russian-Saudi rapprochement and the signing of a nuclear cooperation agreement between the two in September.

So, who does this leave as the alliance’s most likely target? The Houthi group in Yemen tops the list, considering its fighters' increasing attempts to infiltrate Saudi Arabia and the alliance's exclusion of all countries refusing to fight the Houthis, as well as its promise of no military activity in Iraq and Syria without first coordinating with the Syrian regime and international community.

Given Egypt's current conflict with Wilayat Sinai (the IS branch in Egypt), it is unlikely that the Egyptian administration will get involved in air or land conflicts with the Houthis, particularly since their threat to Cairo of closing the Strait of Bab el-Mandeb decreased, and its likely that only Egypt will protect Bab el-Mandeb. Thus, perhaps Egypt’s role in the coalition will be limited, at the current period, to informational support and training or coordination between security forces to curb IS-affiliated loners in alliance member states.

The role of the alliance in confronting IS will become clearer following the political process stipulated by UN Security Council regarding Syria. The process is designed to resolve Syria's civil war by forming a unified government and holding elections within the next 18 months. The role will also be clarified if Iraq decides to join the alliance and to effectively cooperate to eliminate IS, especially in light of the improvement of Iraqi-Saudi relations, after Saudi Arabia announced in December the reopening of its embassy in Iraq after 25 years of diplomatic boycott.