Why Abbas should rethink Palestinian support for Islamic coalition

Some Palestinians see President Mahmoud Abbas' decision to participate in the Saudi-led Islamic coalition as a step to turn the world's attention away from their suffering under Israel’s practices. 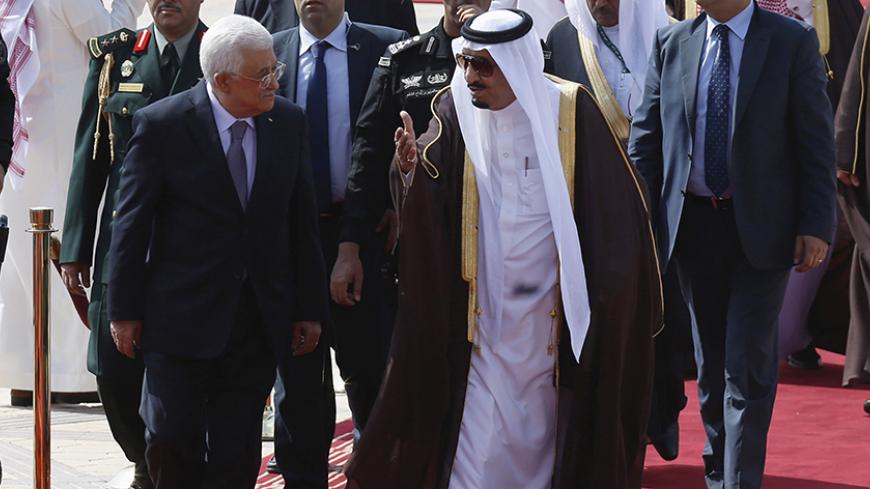 According to some citizens, analysts and politicians, any military force affiliated with the official Palestinian regime in Ramallah should be tasked with defending Palestinians, particularly since they have been subjected to numerous attacks living under Israeli occupation since 1948.

Hassan Khreisheh, second deputy speaker of the Palestinian Legislative Council, told Al-Monitor that the PLO is the organization entitled to decide whether Palestine should join the coalition.

However, he added, “All of the Palestinian institutions are inactive, and [Abbas] is the only decision-maker now and is the one who decided in this matter. He is required to reconsider his calculations, because the Palestinian people will only agree to fight one enemy, namely the Israeli occupation, which is killing our sons and is Judaizing Jerusalem. Our battle and all of our alliances are against the occupation. Going beyond the border and joining alliances is ironic and disgusting.”

Khreisheh demands a full Palestinian rejection of joining any alliance in light of what he calls “Israel-led organized terrorism against the Palestinian people.”

He added, “It is as if we want to find ourselves new enemies. This is shameful, and we should not be a party to it in any way.”

Khreisheh charged that Palestinian participation in the Saudi-led Islamic coalition against terrorism, in the absence of a Palestinian army, is designed to divert attention from Israeli attacks taking place in Palestine. It is also designed to integrate Israel into the region by distracting from Israel as the real enemy of Arabs and finding new enemies such as Iran, Lebanon's Hezbollah and Yemen’s Houthis, according to Khreisheh.

Al-Monitor contacted some Palestinian military commanders affiliated with the Palestinian Authority in the West Bank, but they refused to comment on the matter. Al-Monitor could not reach any official at the Palestinian presidential bureau or the Ministry of Foreign Affairs to obtain additional information and details.

Palestine News & Information Agency - WAFA said Abbas agreed to the union because of the coalition’s potential to achieve security and stability for the two Arab and Islamic countries.

Palestinian participation in the Saudi-led coalition brings to mind the alliance formed in the early 1990s by late Palestinian and Iraqi Presidents Yasser Arafat and Saddam Hussein, respectively. In that alliance, Arafat supported Hussein's invasion of Kuwait.

Abbas did, however, apologize in 2004 for Arafat’s support of that invasion. The apology paved the way for Palestine to exit any Arab alliances against other Arabs, such as Operation Decisive Storm. That operation was announced by Saudi Arabia and included Arab and foreign countries to fight the Houthis in Yemen and forces loyal to Yemeni President Ali Abdullah Saleh — in which Palestine did not participate.

Abbas thus adopted the distancing policy, which he is now going against by joining the new Islamic Military Alliance.

Palestinian political analyst Ibrahim al-Madhoun told Al-Monitor that Palestinian participation in the coalition stems from the PA's sense of obligation to maintain courtesy with some Arab and Islamic forces.

Madhoun added, “It is a coalition force that does not undermine the support of the Palestinian cause. Rather, it focuses on facing the storm hitting the regional reality and the conflict in Syria, Iraq, Yemen and Libya. This means that it will be facing what might be called the Iranian threat, rather than the Israeli threat.”

Palestinian support is important for the alliance's solidarity and morale, given Palestine's value to Arabs and Muslims, he said.

Madhoun said, “Given the lack of any well-defined and declared objectives, so far these forces have not fully developed a unified and integrated project. This coalition is more a media coalition rather than a realistic coalition.”

In announcing the alliance, Saudi Deputy Crown Prince Mohammed bin Salman said any operation will be conducted in coordination with the international community. The coalition had not carried out any attack against terrorist organizations as of this writing.

Be it a media coalition or a coalition that will be taking practical steps in the future, many Palestinians agree that any Islamic coalition in which they participate should focus on confronting the Israeli military machine — as a priority and a necessity.