Are Egypt’s poor paying the price for Cairo development project?

Hundreds of riverboat owners and crew members have been rendered jobless during a project to regenerate downtown Cairo, but officials say the situation is temporary. 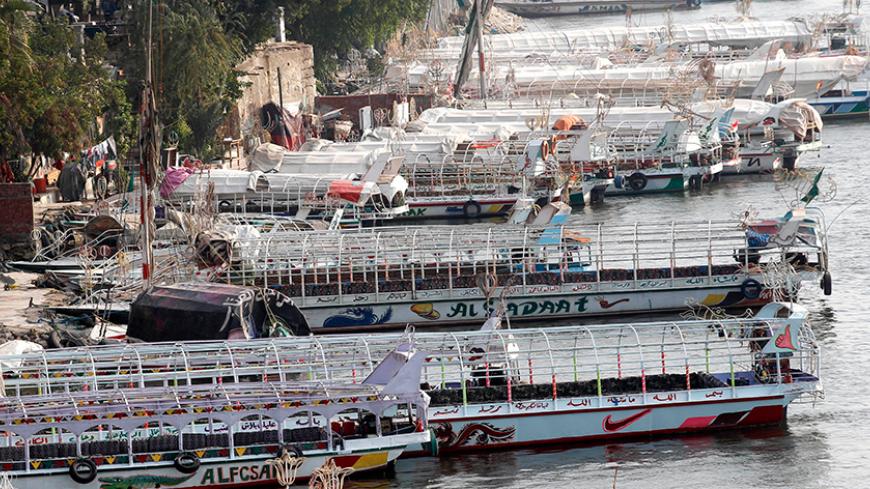 CAIRO — The Egyptian government and Cairo governorate are rejuvenating the area surrounding downtown Cairo, including the Maspero Triangle District. The project includes the development of Nile Corniche Street, which runs along the eastern bank of the Nile River near Tahrir Square. The area is a docking hub for riverboats, known as feluccas, which can be hired out for short leisure cruises.

Many Cairo residents welcome the project, hoping it might help resolve complaints about riverboat workers harassing female passengers. Other citizens have raised concerns about the poor condition of some boats, which are at risk of sinking.

However, the project has left hundreds of riverboat owners and crew members stranded without work. The Cairo governorate, in cooperation with the Nile River police, began evacuating riverboats from the banks along the Nile Corniche in late August. Many of these boat owners have been operating from the waterfront for several years.

On Aug. 20, Cairo Gov. Galal al-Saeed ordered the licensed riverboats to move to the docks at the al-Sahel area and banned boat owners from returning back to the docking area near Tahrir, amid objections and anger from the affected parties. The displaced workers staged protests in mid-September in front of the Nile Corniche. Moreover, riverboat owners held a sit-in in the area that began Sept. 11 and lasted several days.

Protesters raised banners stating that the governorate decision has harmed 200 families whose breadwinners will be transferred to the docks at al-Sahel area, where the environment is not suitable for work given the proliferation of garbage, neglect, bullying and theft.

Yet despite protests, the governorate disregarded the sit-in and continued work on the Corniche project, for which it allocated 8 million Egyptian pounds (around $1 million).

Dozens of riverboat owners protested outside the Egyptian Cabinet on Sept. 30, but they soon ended the demonstration after the Central Security Forces assaulted some master’s and doctoral degree holders who were staging a protest in the same location at the same time. The degree holders were calling for appointments in high-ranking state positions, demanding an end to nepotism.

Mahmoud Hassan, the owner of a Nile riverboat who was affected by the Cairo governorate’s decision, told Al-Monitor, “The governorate has yet to fulfill the promises it made to us. We have yet to be transferred to the docks of al-Sahel area according to the decision of Cairo’s governor — although these docks are completely unsuitable for operating our boats, unequipped with electricity and full of garbage. The governorate did not compensate us, although we have ownership documents for the Corniche docks and licenses for our Nile boats. In cooperation with the Nile water police, the governorate removed the anchors and forced us to evacuate the Nile Corniche. Whoever dared to object was arrested and had his boat seized.”

Hassan accused the Cairo governorate of siding with the owners of hotels along this section of the Nile and the owners of larger tourist boats by evacuating the riverboats, which are very popular among low-income residents. An entire boat could be rented for an hourly fee of about 50 pounds, or less than $7.

Mahmoud Abu al-Yeser, another riverboat owner, told Al-Monitor, “The governorate wants to regenerate the Corniche at the expense of the poor and to please the rich who are the owners of hotels and tourist boats, although we have been working in [this area] for decades.”

He echoed Hassan, complaining that the state has yet to provide any alternative and has failed to deliver on promises to relocate their docks.

“The affected riverboat owners filed a complaint to the Cabinet, but no response was issued. The state does not care about our crisis, although more than 5,000 workers working on over 120 riverboats have been rendered jobless and forced to move away from the Tahrir Corniche,” Abu al-Yeser said.

Abu al-Yeser denied media accusations that riverboat owners were harassing women at the Tahrir Corniche. He said, “The police forces were deployed near the boats to guard the hotels. If harassment was happening, this means that they are the ones to blame. There is no justification for harming the workers' families, who now find themselves deprived of any source of livelihood or income.”

Khalid Mustafa, spokesman for the Cairo governorate, told Al-Monitor, “The governorate has set its mind on completing the project to rejuvenate downtown Cairo and considers the Nile Corniche in the Tahrir area a [key part] of the development project for Khedival [downtown] Cairo. … The governorate is working hard to provide an alternative to the licensed riverboat owners who have been transferred to al-Sahel.”

He added, “The alternative location is currently being equipped, so it is difficult to judge its validity now, but soon the boats will be transferred there. The governorate will provide all means of comfort and will make sure that the boats are safe by coordinating with the security forces to protect them during work.”

Mustafa dismissed the idea that the project is designed to cater to hotels. "The only beneficiary is the citizen, who now can enjoy sitting on the Nile Corniche that has been rejuvenated in a way that impressed citizens and the media.”

He said, “I call on riverboat owners to give the matter some time until the alternative location is fully equipped. The face-lift of Cairo will be in everyone’s best interest. Cairo will once again be a magnet for tourism of all kinds."

Mustafa stressed that the development will not harm licensed boat owners, only unlicensed ones who are in violation of the law and are not subject to the supervision of the concerned authorities.