Why Bibi used Paris climate talks to focus on terrorism, not environment

In Paris for the COP21 climate summit, Prime Minister Benjamin Netanyahu devoted his talks mostly to the issue of combating terror. 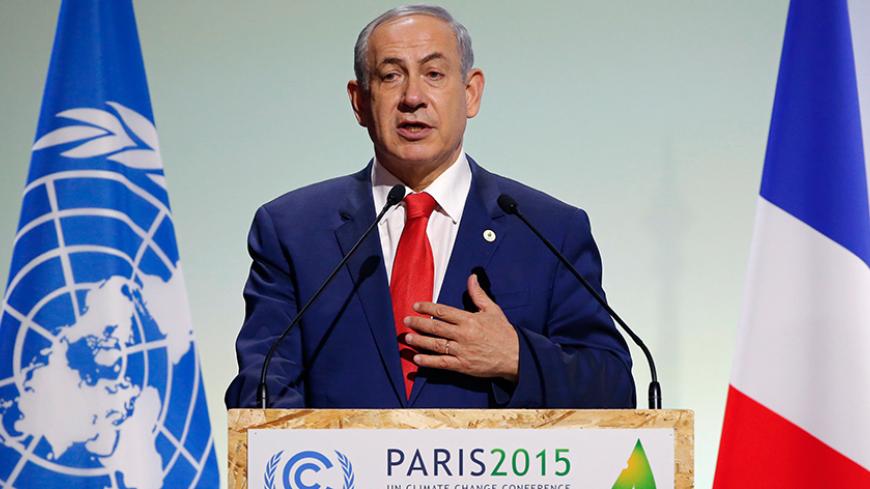 Israeli Prime Minister Benjamin Netanyahu arrived in Paris on the morning of Nov. 30 and left that evening. Rushing from one meeting to another, he barely had time to make a speech at the COP21 climate conference or hold bilateral talks there with French President Francois Hollande, Russian President Vladimir Putin and the prime ministers of Australia, Japan and Poland. He spoke with US President Barack Obama briefly in the corridor as both men walked to the conference hall, but did not meet with any Arab leader, at least not officially. Israeli diplomats confirmed to Al-Monitor that Netanyahu requested no such meeting. Talking to Israeli correspondents, Netanyahu recounted that he shook hands with Palestinian Authority President Mahmoud Abbas and spoke briefly to some Arab leaders, but refrained from mentioning them by name.

The Nov. 13 terror attacks in Paris created a new reality. In the hours and days following the attacks, the French leadership had to make up its mind which public events would be maintained and which to cancel. No one envisaged canceling the COP21 climate summit. Too much effort had been invested in organizing it; too many negotiations took place to prepare this international meeting; and too many leaders (147 in all) and journalists (more than 3,000) were about to arrive. Obama and Putin were coming, as was Chinese President Xi Jinping. The climate change conference became, at least partially, a vote of confidence in France's ability to guarantee the safety of all the summit's participants.

Netanyahu's attendance was hardly motivated by interest in reducing greenhouse gas emissions or increasing the use of renewable energy. Obama had decided several months earlier that he would take part in the climate summit, and so did the kings of Jordan and Morocco. Putin's decision to arrive was announced on Nov. 8. But the public confirmation of Netanyahu's participation came about a week before the opening day. Israeli diplomatic sources confirm to Al-Monitor on condition of anonymity that the presence of so many heads of state on the backdrop of the Paris attacks either prompted this last-minute decision or tilted the balance toward it.

The prime minister's brief presence was reminiscent of his participation in the historic march in Paris following the January attacks on Charlie Hebdo and Hypercacher. That decision, too, was made at the very last moment. Sources at the Elysée said at the time that Netanyahu informed them of his arrival after the announcement that Abbas was coming to Paris. The Elysée was lukewarm about this visit and viewed Netanyahu's decision to show up uninvited almost as a provocation. The French presidency would have preferred to leave the Israeli-Palestinian conflict out of the march.

Netanyahu's statements after the attacks were received in Paris much like earlier statements by Israeli politicians praising French involvement in fighting Islamic extremists — its military intervention in Mali, for instance. Paris had not considered these words genuine, but self-serving. A French diplomat told Al-Monitor on condition of anonymity, "Netanyahu does not care about France's battle against extreme Islam in Africa or its airstrikes in Iraq and in Syria. The Israelis are only looking to gain points in the international arena."

Going back to the COP21 summit, Netanyahu's decision to come stirred little reaction in Paris. As the hosts, the French were adamant about keeping the summit focused on the climate negotiations. In fact, France has rejected attempts by Arab countries to include the term "countries under occupation" in the climate agreement. An Israeli diplomatic source told Al-Monitor on condition of anonymity that the Arab UN group managed to introduce these words into the draft text, but that the final version will probably not include them.

Netanyahu only partially respected the framework of this international gathering. He divided his three-minute address almost equally between terror and Israeli achievements in the field of environmental protection. The emphasis of his visit, of his bilateral talks, was on battling extreme Islam and other military threats. The COP21 summit supplied Netanyahu with multiple opportunities to present his claim that Israel and the West are partners in the fight against extreme Islam. "Israel is a significant factor in the region and in the world … an important authority on issues such as security and fighting terror, and also in cyberspace," he said in his briefing to Israeli media. He also said that talks he held during the COP21 lunch focused on the shared international fight against terror and Islamic extremism. "They understand that this is a [worldwide] embracing phenomenon. Not just the Islamic State. In Africa, it is also Boko Haram, al-Shabab."

Netanyahu's attitude reflects the minimal interest shown by the Israeli public and media sphere in the COP21 conference and the threat of climate change. Some Israeli pundits even cynically wondered why Obama was spending his precious time at the climate conference in Paris while war was raging in Syria and the Middle East is in turmoil. The Israeli media devoted a few general articles to the summit itself, but there was no real public debate over Israel's commitments to reduce greenhouse gas emissions, the need to cut down on private transportation or the possibility of investing more public resources in renewable energy. Evening news broadcasts featured images of Netanyahu at Le Bourget, the COP21 venue, but once Netanyahu returned home, the press practically dropped the issue.

Netanyahu opened his address in Paris by saying, "Both our peoples have long and bitter experience confronting terrorism. This is not surprising, because Israel and France have in common precisely those qualities that the terrorists seek to destroy. … But the terrorists who struck down innocent people in Paris, well, they make the same mistake as their counterparts who strike down innocent people in Israel."

Netanyahu's words clearly demonstrated his priorities. He had come to Paris to show that the battle there against extreme Islam is the same battle Israel is facing. Once home, he devoted his attention to other pressing issues, such as the outline for natural gas resources and benefits distribution. On this topic, too, Netanyahu listens to those who speak his language and won't let environmental considerations stand in his way.