Turkey's AKP government will not be able to use the G-20 summit as an anti-Kurdish platform. 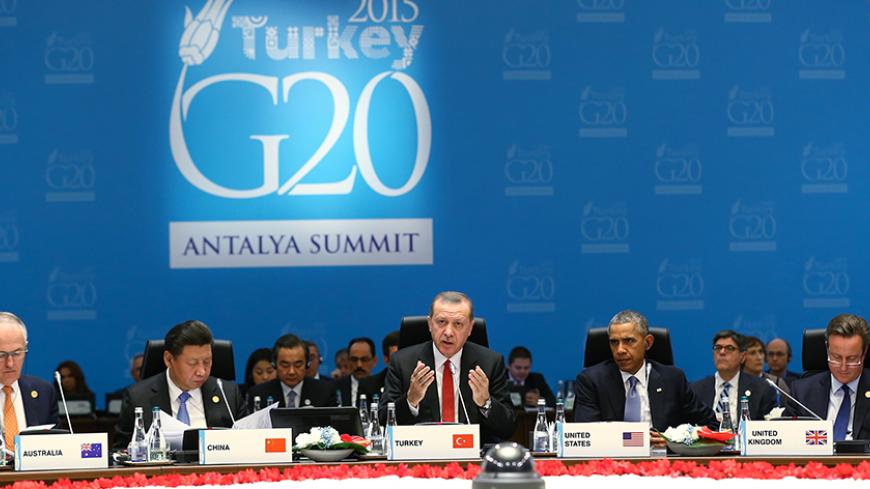 If the Paris massacre had not occurred on the eve of the G-20 summit in Turkey, the Justice and Development Party (AKP) would have used the summit as an anti-Democratic Union Party (PYD) lobby instead of focusing on the Islamic State (IS). Although the IS attacks in Paris have spoiled Turkey’s intended approach, Turkey will not give up its efforts to form an anti-PYD/YPG (People's Protection Units) front and will employ multifaceted moves. President Recep Tayyip Erdogan’s declaration immediately after the Paris massacre signaled that intention when he said, “We have to abandon the rationale of my terrorist is good, your terrorist is bad.”

The AKP, which emerged from the Nov. 1 elections with a victory even it did not expect, has been increasing pressure on its opposition, especially the Kurdish movement, and is now pursuing stepped-up efforts to assume a decisive role in Syria. By stating that the democratic autonomy system at Rojava carries risks for Turkey, Erdogan and the AKP are trying to obtain the support of the United States and the international coalition.

Erdogan has also insinuated that he will be asking Vladimir Putin at the G-20 summit to review Russia’s relations with the Kurds.

The pro-AKP media, which has been praising the Nov. 1 elections as Turkey’s standing up against its international and domestic opponents, sees the G-20 summit as an occasion to settle accounts with the West and Russia.

“Nov. 1 was a matter of national defense, and the result achieved is a challenge to its foes. Our ‘internal invaders’ have been enfeebled,” Ibrahim Karagul, the editor-in-chief of the pro-government daily Yeni Safak, wrote about the G-20.

“But unless we take on their collaborators in our geographical neighborhood, they will continue with their invasion attempts. The debate at G-20 will be a settling of accounts at a global scale.”

The “internal invaders” are the Kurdish movement, which has demanded a decentralized government model by striking down the AKP’s executive presidency goal. The AKP fears that unless the PYD’s international prestige is erased for good, Turkey’s anti-Kurdish operations will not have long-lasting effects and Rojava could still remain an element that could revitalize the Kurdish movement in Turkey.

How did the AKP’s Nov. 1 victory affect Rojava? Do Rojava Kurds think the election outcome could encourage the United States to enter into closer relations with Turkey and turn its back on the Kurds? Al-Monitor contacted YPG and PYD senior officials who said it wouldn’t serve them to answer those questions at this stage and they prefer to remain silent for now.

Civan Ahmed, a YPG member reached by telephone at Kobani, was more willing to talk. He doesn’t think the United States will embrace Turkey and turn its back on the Kurds. “If the US and Europe turn their backs to us politically and militarily, they will have to face their own publics. Their people know we are fighting barbarism called [IS]. Those who turn their backs to us will be embracing barbarism. Will their people accept this? We are the only ones that can stop [IS]. They have to see this,” Ahmed said.

Journalist Barzan Iso of Rojava said the relations between the YPG and the Pentagon were at its highest levels, but such a level hasn’t been reached with the White House. According to Iso, American diplomats have been telling PYD officials that “Rojava is our red line in our relations with Turkey. We won’t let them intervene at Rojava.”

“The Rojava administration knows well how slippery Middle East equations can be and is making preparations accordingly,” Iso said.

PYD leadership adviser Sihanok Dibo, who was contacted by phone in the Kurdish town of Qamishli, alluded to the preparations Iso spoke about.

“International forces know well that nobody in Rojava accepts to be subservient. The will of the people is paramount. Kobani was a resistance that also defended the entire West, from Washington to Moscow. Rojava represents civilization resisting barbarism for all to see,” Dibo said.

And what about the allegations that the United States could sell out the Kurdish movement? Dibo’s reply was short: “How can the US sell something they didn’t buy?”

On Nov. 5, Col. Steve Warren, the US spokesman for anti-IS operations, issued a statement that said the United States was not sending weapons to the YPG. This raised the question of whether the United States has turned its back on the Kurds.

Turkey was comforted by the news that the United States was sending weapons to Arabs within the Syrian Democratic Forces, which consists mainly of Kurdish YPG-TPJ (Women's Protection Unit) fighters. On Nov. 11, the US State Department went a step further and stated Washington does not support autonomy in Rojava. Deputy spokesman Mark Toner said the United States did not favor a kind of quasi-autonomy in Syria, although the United States knows well how effective the YPG has been in the struggle against IS.

“We declared democratic autonomy independent of the US and Russia, but together with all the people and beliefs here. The Kobani victory of Kurds was a victory for world civilization. Now, despite that reality, if they want to abandon 4 million Kurds of Rojava, that is another story,” Dibo said, which appeared to be a response to Mark Toner’s statement.

The Kurds are aware that they are entering a period of ups and downs despite their cherished role as the field ally of the international coalition. The Kurds have decided to resist. What they don’t know is if the Western public will support them or just watch.

If the Western powers leave the Kurds alone to face Turkey, they will only be infusing new blood into IS. Attacks by anti-Kurdish forces will leave the Middle East facing a bloody destiny.

But what we have learned from the Paris massacre is that the West will not be immune to such a bloody destiny.