Is the Islamic State going global?

The Islamic State is now in a position to decide to go global or stay regional, following the attacks in Paris. 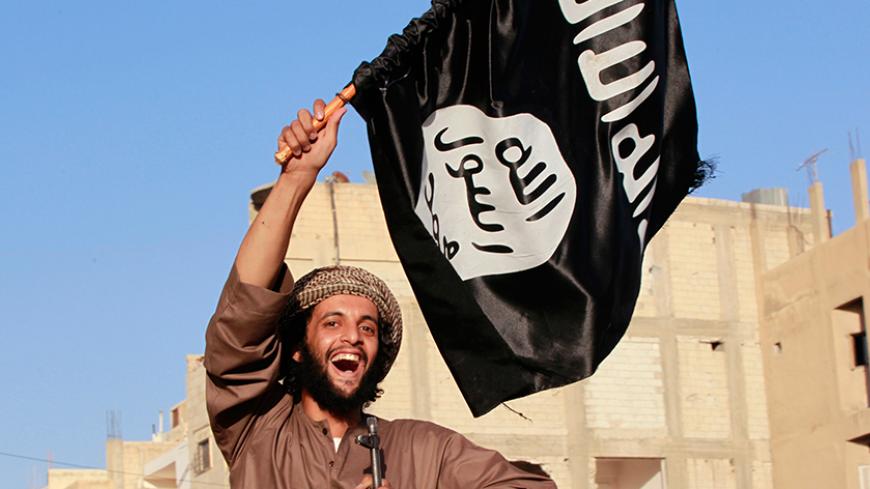 An Islamic State fighter, waving a flag, cheers as he takes part in a military parade along the streets of northern Raqqa, Syria, June 30, 2014. - REUTERS/Stringer

For the past 15 days, the only Islamic State-related news the world was interested in was details of prospective anti-IS military operations in Iraq and Syria, especially how to field a ground force. Then the coordinated attacks in Paris on the night of Nov. 13 bitterly reminded the world that it had overlooked the question of how IS was going to defend itself.

In the Al-Monitor article of Oct. 26 titled "Is Russian intervention in Syria pushing 'moderate jihadis' toward Islamic State?" I looked for an answer to this crucial question. In that article, which cited experts and journalists who closely monitor the events, my basic conclusion was that two different schools of thought have emerged within IS: the "localist approach" that advocates consolidating domination of Syria and Iraq, and the "globalist approach" that favors expanding the war to the Middle East and the rest of the world to avoid being easily overrun by the enemy. The localist approach, which is generally adopted by the former Baathists and Arab nationalists of IS, emphasizes the historic and symbolic significance and geostrategic position of Raqqa and Mosul and the call for the coming war to be fought in and around these two towns. The globalist approach, generally popular with foreign militants called the “muhajiroun” who have joined IS in Iraq and Syria, calls attention to the unwarranted focus on an insignificant piece of land at Kobani in 2011 and the loss of some 2,200 fighters to capture that piece of land. Globalists demand that the same mistake will not be repeated.

These localist and globalist contradictions within IS, which were ignored previously because many felt that the group confined its war to Syria and Iraq, have become much more consequential following the Paris massacre. Is IS on the verge of a split between the two schools of thought?

M.O., a humanitarian worker who has been to Syria many times and who is an expert on Salafist movements, spoke to Al-Monitor in Istanbul (on condition of anonymity) and confirmed that there is such a fissure between localists and globalists within IS that is becoming increasingly perceptible. He felt the Paris attacks will add to this trend.

“But I don’t think IS will give up its focus on holding on to territory. The caliphate and the IS idea it announced in June 2014 is attracting many followers. If IS cannot hold on to the territory it controls, it can only become a landless, practically invisible entity like al-Qaeda,” he said. “That is why I don’t see the Paris attacks and other attacks that may follow as a major change of IS strategy but as tactical moves to hike up the price of the approaching war.”

O.B., who has been to Syria several times, also spoke to Al-Monitor on condition of anonymity. He thinks the globalist approach may gain the upper hand in IS.

“First you must note that religious motivation may be vital for IS fighters on the ground, but I believe the War Council that determines its war strategy is not motivated by religion. It is guided by a rational, wise and pragmatic approach,” O.B. said. “After the Paris attacks, IS saw that with eight or 10 people, with expenses that will not exceed $100,000, they can paralyze a Western capital for two days and sow fear across the world. It is provoking violence against Sunni Muslims. That is why IS might opt for the pragmatic course and go for new attacks like in Paris, which it considers as a major victory.”

Can IS continue with such low-cost attacks that potentially have such major effect?

Both interviewees feel that attacks such as the one in Paris may continue depending on developments in Iraq and Syria.

“Look, we are debating the effect of the Paris massacre on Western countries. Did you think of its effect on IS itself? If you ask me, they see Paris as achieving the impossible, which will boost the motivation of the organization and the confidence of the ranks in its leadership,” O.B. said.

He added, “They see it as God's blessing. Such success stories will mean an easier transfer of militants from al-Qaeda and other jihadi outfits, the recruitment of more people and more generous financing.”

The next question to be addressed is whether alongside the debate over localist and globalist approaches will the stepped-up coalition airstrikes and gains on the ground of their foes mean a split in IS.

Neither M.O. nor O.B. can answer this question in the affirmative because both agree that holding on to territory in Syria and Iraq and establishing an Islamic state is the major pillar of the organization’s ideology. The next question then will be if IS-held land in Iraq and Syria, and especially in Raqqa and Mosul, is lost, will it be the end of IS?

Both experts answered along similar lines, as they believe IS will defend populated locations it controls in Iraq and Syria, particularly Raqqa and Mosul, to the bitter end, village by village, neighborhood by neighborhood and even house by house.

This is the true strength of IS. They wait for the enemy in villages, in streets and houses with guns in hand. Unfortunately, without a powerful ground force with effective offensive capability and support from the air, it will be very difficult to dislodge the IS militants from places they control with French air attacks against Raqqa. But let’s say they are pushed out from those places. How are these places going to be held? If successful, has anyone even begun to think of how to reconstruct these places where about 6 million people live? All these realities and pertinent questions discourage interested countries from recognizing IS as a primary threat. They still worry about their national agendas and their own interests instead of agreeing on a unified command control and an integrated strategy. Who is paying for this shortsightedness? The innocent in Ankara, Beirut and Paris.