A spate of airstrikes against mosques in Syria hints at the American military accepting fewer restrictions on battlefield targeting, with higher risks for civilians. 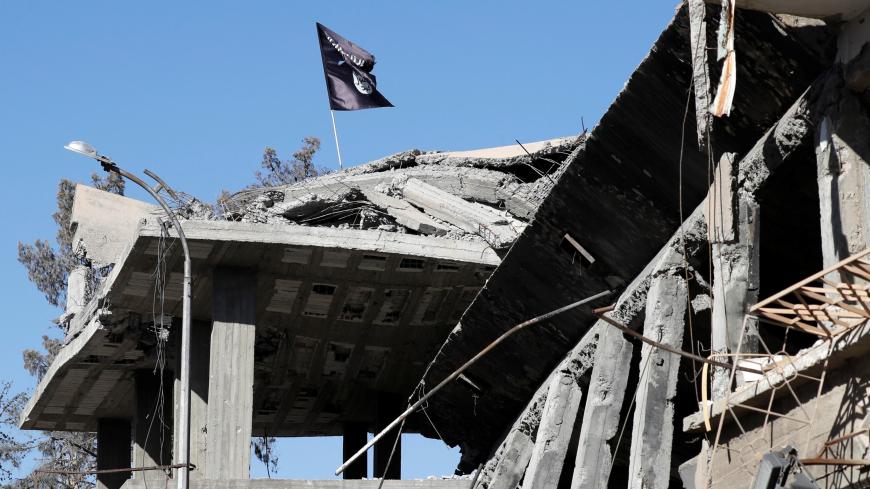 A flag of Islamic State militants is pictured above a destroyed house near the Clock Square in Raqqa, Syria, Oct. 18, 2017. - REUTERS/Erik De Castro

A spate of US airstrikes against mosques commandeered by the Islamic State (IS) in Syria appear to point to the Donald Trump administration adopting unusual measures to target extremists, experts say.

The Pentagon acknowledged Monday that coalition fighter jets struck two mosques near Susah, Syria, following reports of six civilian deaths in the bombing of a religious school in Hajin, a town in the Euphrates River Valley. The US-led coalition fighting the Islamic State conducted a third mosque strike Wednesday, a military spokesman said.

US military officials said they approved the strikes because the militants had converted the sanctuaries into battlefield control nodes. “It’s not us, it’s IS that turned that mosque into a command-and-control center, which made it a legitimate military target,” Pentagon spokesman Rob Manning told reporters Monday.

A Pentagon strike on a mosque would typically take considerable planning. The Defense Intelligence Agency has a no-strike list to protect noncombatants on battlefields where US warplanes are active. But the Pentagon can overturn those protections if it determines that militants are using schools, hospitals or religious buildings to target US troops.

“It could well indicate that the US military thinks the gloves have come off and they’re willing to make the strike,” said Ryan Goodman, a former Defense Department lawyer. “Only under the most exceptional circumstances would a mosque come off of a no-strike list.” Goodman, now a law professor at New York University, added that the strikes could indicate the Islamic State has evolved its tactics to extend the battlefield into the mosque.

The US military has only struck mosques on rare occasions in the four-year anti-IS fight in Iraq and Syria. The Defense Department confirmed in May 2017 that a Hellfire missile strike targeting al-Qaeda fighters near Aleppo had mistakenly struck a recently built mosque, but only after weeks of denials. The London-based conflict monitor Airwars also reported that a coalition strike near Al-Nour Mosque in the former Islamic State capital of Raqqa in April 2016 left three civilians dead.

The strikes could signify a shift away from the counterinsurgency doctrine focused on winning over the population popularized by Gen. David Petraeus to a knock-down, drag-out brawl against the Islamic State.

“The US-led coalition is not conducting a population-centric counterinsurgency in Syria, which means that US forces are not operating in large numbers near the mosque that was hit by airstrikes,” Stephen Tankel, a former Pentagon senior adviser, told Al-Monitor.

Under international law, a US airstrike on a mosque would only be permissible if the damage inflicted is proportional to the military gain, a consideration that would include the cultural or historical relevance of the site. By setting up command posts inside mosques, experts said, militants may be luring the United States into strikes that inflame the local population.

“This could be a case where IS tried to cynically manipulate the laws of war, and the US decided to call in the strike,” said Stephen Pomper, a former senior director on the National Security Council during the Barack Obama administration. "If so, the questions here are mainly how strikes like these fit within rules of engagement, and whether the harm to civilians and civilian objects is proportionate for purposes of the law of war."

Conflict monitors say the mosque strikes come amid an uptick in fighting as the United States seeks to clear out the last remnants of IS-held territory in northeastern Syria.

“Such intensity of coalition strikes and civilian harm claims has not been seen since the capture of Raqqa from a year ago,” said Chris Woods, director of Airwars, a nonprofit which tracks civilian deaths and injuries from US-led strikes in the IS fight. The news of the mosque strikes, he said, “does indicate a troubling shift in tempo by the US-led alliance, which is placing civilians more at risk.”

In August, the Defense Department said IS remained “well-positioned” to rebuild its so-called caliphate across northern Syria and Iraq. The Pentagon also said the group “probably is still more capable” than its predecessor — al-Qaeda in Iraq — at its peak more than a decade ago.

What’s clear, experts say, is that the US military gives the 2,200 American troops in Syria the right to defend themselves above all else.

“In our rules of engagement that we give to soldiers on the ground, they will often say you should only target people in these circumstances,” said Adil Haque, a law professor at Rutgers University. “Then in big bold letters it will say: Nothing in this limits your right of self-defense.”