US Defense Secretary Lloyd Austin ordered the briefing after reading an investigation into the strike by The New York Times. 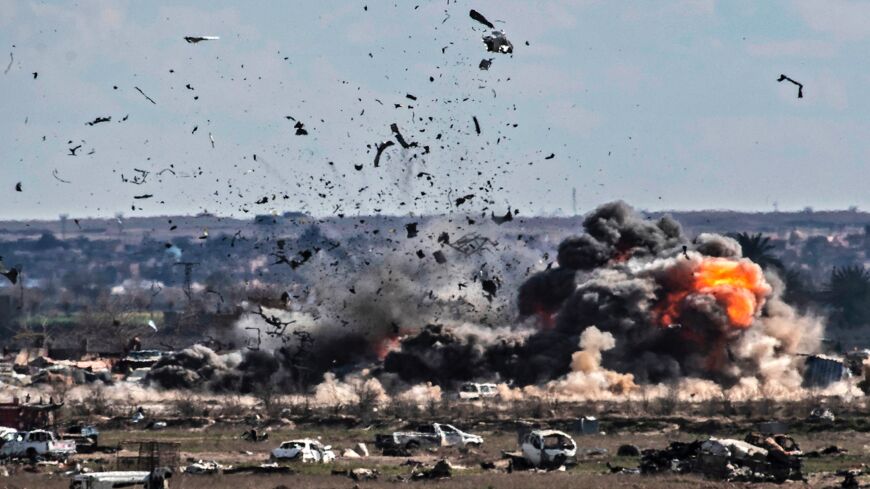 Smoke and fire billow after shelling on the Islamic State group's last holdout of Baghuz, in the eastern Syrian Deir ez-Zor province on March 3, 2019. - DELIL SOULEIMAN/AFP via Getty Images

The head of US forces in the Middle East, Gen. Kenneth “Frank” McKenzie, briefed US Defense Secretary Lloyd Austin on Tuesday about a 2019 airstrike in Syria that the US military admitted for the first time this week had killed civilians.

Austin requested the briefing after The New York Times revealed Saturday that military officials had serious concerns that dozens of civilians had been killed in the bombing during the final battle against the Islamic State (IS), Pentagon Press Secretary John Kirby revealed.

Why It Matters: The strike at Baghuz may be one of the highest single incidents of civilian casualties caused by the United States during the five-year war against IS.

The distinction between civilians and combatants blurred during the battle as the jihadist proto-state crammed in to just a few square kilometers in open fields along the north bank of the Euphrates River. US airstrikes pounded away as a hail of machine gun and mortar fire eventually forced IS’ remaining adherents to surrender.

Near the end of the battle on March 18, 2019, US aircraft dropped three bombs in quick succession in response to a call for air support by the Kurdish-led Syrian Democratic Forces, a spokesperson for US Central Command, Capt. Bill Urban, said in a statement on the incident. CENTCOM said today that the bombs were three 500-pound guided munitions.

The New York Times first reported that the strike alarmed officials at CENTCOM’s forward air command center at Al Udeid air base in Qatar. The officials reportedly watched the strike on live feed, fearing dozens of civilian casualties. They were not informed of its request in advance by a US Special Forces task force in Syria.

The strike may have killed up to 80 people, 16 of which were deemed by CENTCOM to have been fighters and four civilians. The role of the rest remained unclear, the command said in a statement first provided to the Times.

What’s Next: Whether Defense Secretary Austin will order an independent investigation into the strike remains to be seen.

The US military has long been accused of downplaying civilian deaths in its bombardments during the more than four-year war against the jihadist proto-state, whose adherents committed genocide and other crimes across Iraq and Syria.

“I challenge anyone to find a more precise air campaign in the history of warfare,” then-commander of the US-led coalition Gen. Stephen Townsend argued following the battle for Raqqa.

Know More: Airwars, the UK-based nongovernmental organization to which Townsend responded directly in 2017, laid out in a report in September that CENTCOM had significantly undercounted civilian deaths resulting from its strikes in Yemen.