How some southeast Turkey residents are struggling with mystery murders, urban warfare

Residents in the southeastern Turkish town of Silvan are angry with the state and the Kurdistan Workers Party for the destruction of their town. 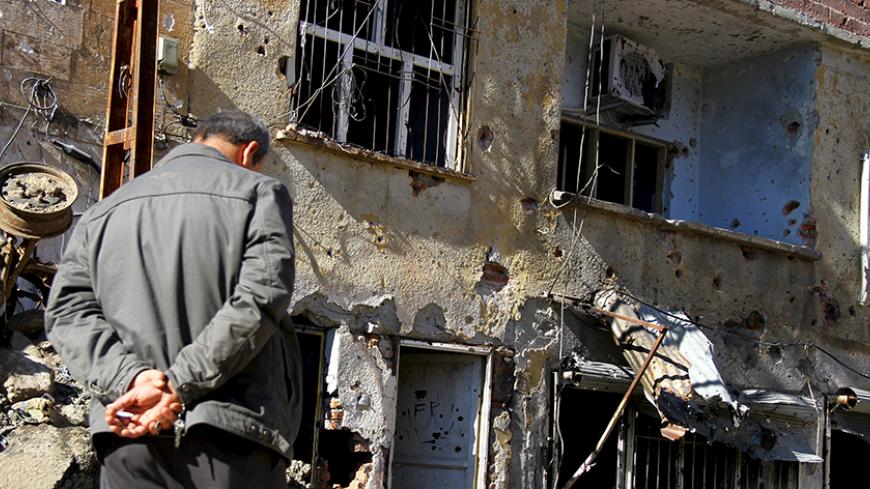 A man stands in front of a building, which was damaged during the security operations and clashes between Turkish security forces and Kurdish militants, in Silvan, in the Kurdish-dominated southeastern Diyarbakir province, Turkey, Nov. 15, 2015. - REUTERS/Sertac Kayar

SILVAN, Turkey — At first glance, the town of Silvan in southeastern Turkey with 86,000 residents and modern buildings looks like a beautiful and serene town. But once inside the Mescit neighborhood, a war zone reveals itself with businesses turned into rubble and every single building riddled with bullets. Residents are trying to salvage whatever is left of their belongings.

Shopkeeper Dogan Celik told Al-Monitor, “First my coffee house was destroyed, then my house and finally my grocery shore. I grew up in times of war but I don’t want my children to have the same life. In three days I lost everything I had. We don’t know what to do. I moved my family to a different neighborhood.”

Nedret Yakan, who used to rent out wedding gowns, showed the destruction at his store and said his 20 years of hard work was wiped out in one week.

“I used to rent out wedding gowns. We made a living from that and sent our children to school. As you see, I have nothing left,” he told Al-Monitor.

Across the street, the walls of Sahin Donmez’s house had been knocked down by mortar rounds, which started a fire that destroyed the entire house. “We had already abandoned our house but left our belongings behind. The fruits of 40 years of work were lost in a moment. We have nothing left,” Yakan said.

One of the more curious sights was the nationalist and pro-state slogans scrawled on the walls of houses in the area affected by heavy clashes. Residents suspect this is the work of the police, which has created much local resentment. Graffiti slogans such as "the Esedullah team is here" can be found in every location where the special operations teams have operated. Some news agencies circulated photos of two special operations officers spraying the walls with these slogans. In response to increasing public reactions, the Ministry of Interior has initiated an investigation.

According to local journalist Ihsan Bahtiyar Yilmaz, born and raised in Silvan, what the town's residents have suffered over the last few days has been worse than the clashes of the 1990s.

He told Al-Monitor, "About 550 houses and workplaces have been destroyed. There is not a single house without bullet marks; Silvan is worse than Kobani. A mortar tube on the outskirts of Silvan was firing at random."

He said, “Yes, in the 1990s there were unsolved murders but they were targeted killings. Now they fire at random and hit civilian houses and businesses. In the '90s there were many deaths but there was no fighting in the town. The entire population of Silvan needs to be rehabilitated; we all need psychological support. At the slightest noise people start trembling. Out of a population of 50,000 [this number excludes some Silvan districts], maybe 35,000 people have now left. I saw people abandoning their houses and running away.”

Muhittin Kan, the chairman of the Chamber of Traders and Artisans of Silvan, recalled that the curfew was first clamped down on Aug. 10 and renewed six times. Although the curfew was imposed on certain neighborhoods, in other neighborhoods residents stayed indoors, too. The entire town was paralyzed.

Kan had grievances about the state’s handling of the Silvan crisis. “The state should not have treated the people so brutally. It is as if Silvan has never been part of Turkey. They attacked us with unadulterated animosity. They treated everyone like criminals,” he told Al-Monitor.

Kan explained that as a notable leader of a nongovernmental organization he tried to mediate. “I tried. I went to the municipality, to the local governor, to the activists. I spoke to the youth and asked them to leave the town to save people. They refused. There was nothing more we could do,” he said.

Kan was blunt about his anger. He said Silvan's residents were angry with the fighters staying in the center of the town. “Look, people have already voted to show their choice. They don’t want the fighters in their town. People are not ready for self-government. But they direct their anger to the state that withheld compassion,” he said.

He claimed that children going to buy bread were shot by snipers. “Nobody died in routine clashes. They were all hit by snipers,” he said.

Kan added that the town's economy has collapsed and called on the state to declare Silvan a disaster zone. “This area has to be declared a disaster zone to preserve the business credibility of our shopkeepers and traders. They cannot pay their debts on time. They may simply migrate. The state must help to prevent them from being blacklisted by banks,” he said.

The incidents in Silvan began after the declaration of self-government.

Some town residents who did not want to be identified said the decision for self-government was taken by the Kurdistan Workers Party (PKK). They said fake petitions fraudulently signed on behalf of residents were sent to PKK leaders demanding self-government. The PKK then decided to declare self-government as if responding to the calls of the people.

Although this is an issue widely debated by Silvan's residents, it is yet to be proven.