The tension and restrictions that have affected social, economic, education and health services are now threatening journalists, and journalism itself. 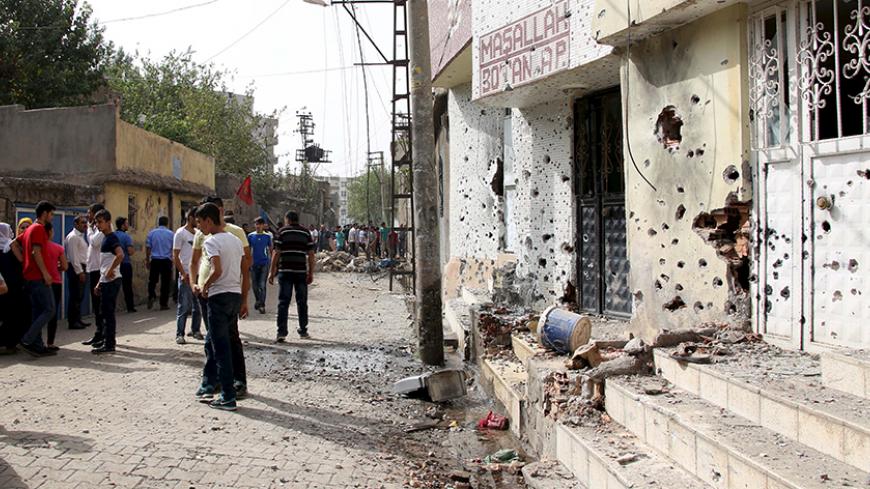 Residents stand in front of a damaged building after intense clashes between the Kurdistan Workers Party and the Turkish army in the southeastern town of Cizre in Sirnak province, Turkey, Sept. 12, 2015. - REUTERS/Mahmut Bozarslan

CIZRE, Turkey — During the eight-day, 24-hour curfew imposed earlier this month on the city of Cizre, journalists were not allowed to enter the town.

The only news came from a few local reporters living in the town, where frequent breakdowns in telephone and Internet connections hampered their work. On the eighth day, when the curfew was lifted, journalists poured into Cizre.

Journalists first headed to the Nur neighborhood, where clashes between the army and the Kurdistan Workers Party (PKK) had been the most violent and damages were severe.

It was difficult to work in that neighborhood, which was heavily fortified with barriers and unexploded ordnance. But those weren't the only challenges.

When a Turkish newspaper journalist tried to photograph the damage, a young man approached him and shouted, “Get out of here. You are biased. We won’t let you work here.”

During the argument, witnessed by Al-Monitor, local residents were trying to calm the young man, but he couldn’t be calmed down. He said, "We don’t want anyone other than IMC-TV here. Especially if Kanal D comes, I will beat them up. We are fighting for our lives here and look what they are reporting."

He was angry because, like most of his friends, he believed the mainstream media did not faithfully report what happened in Cizre.

A short time later, in the neighborhood of Cudi, a foreign reporter was harassed. Al-Monitor also witnessed that confrontation. A resident who appeared threatening told the journalist, "What are you doing here? You come just now? You are all writing lies. Get out of here.”

Bekir Gunes, a reporter of IMC-TV, spent eight days in the town after he sneaked in.

Gunes spoke to Al-Monitor about his experience. “I hit the road for Cizre on the night of Sept. 4 when the curfew was declared. They didn’t let us enter the town. We found other ways of entering. On the second day of the curfew there were heavy clashes all over. I went to the municipality’s fire station and discovered that many people had taken cover there and couldn’t leave. There were snipers on the roof of the local governor’s office … and they were occasionally firing warning shots. There were frequent tear gas shells fired. But we had to move around to get our story. We went out hugging walls — sometimes crawled — to avoid detection by snipers. That is how I managed to enter the Cudi neighborhood. After that it became a tough struggle to avoid being shot and to find ways to send our reports out,” he said.

Some days before the Cizre violence, similar incidents occurred in the town of Silopi. One of the first journalists reaching the town was Sertac Kayar. He told Al-Monitor about his close calls. He said, “We went to the restive neighborhood when the incidents erupted. When we wanted to take photos, snipers opened fire and the wall next to me was riddled with bullets. To make sure that they were firing at me I showed my camera and firing resumed. Then I was sure. I also came under fire at Silvan and had to leave by hugging walls.”

Tension also has been high in Diyarbakir, the biggest Kurdish-dominated city of the region. Journalist Ferhat Mehmetoglu, who works in Diyarbakir, told Al-Monitor, “In the market I saw undercover policemen trying to detain some people. I asked my cameraman to start filming. I saw a lawyer at the entrance of the building being beaten up. We began filming. The police cursed and attacked us. We stayed. Three of them assaulted me, but when they saw the cameraman still filming they backed off.”

Ahmet Abakay, president of the Progressive Journalists Association, said there is no freedom of the press or free speech in Turkey. Abakay told Al-Monitor that journalists have to unite. He said, “In the southeast, journalists are under pressure from both sides. The PKK says you have to be on their side. The government says the same. That is because press organizations are feeble. They are not a strong union. We must become [united]. Otherwise, our problems will continue.”

Veyse Ipek, president of the Southeastern Journalists Association, said the problem is ideological. He told Al-Monitor, "The language of the mainstream media is rapidly changing. This is not because of the reporter, but because of the philosophy of the people he works for. Their language no longer serves peace, but violence. They are using the profession as a psychological warfare tool."

Ipek added, "It is wrong to accuse only one side. A journalist cannot be a partisan. They should not pass judgments on who is right or wrong. They should clearly set out the case. They may be under pressure to support one side against the other. The police may be behaving the same way, but the state cannot step outside the law. The violence we are observing is worse than in the 1990s. Our goal should be to institutionalize — above all — freedoms of thought and expression, which include freedom of the press.”