Some in Turkey still balk at EU's 'indecent proposal' 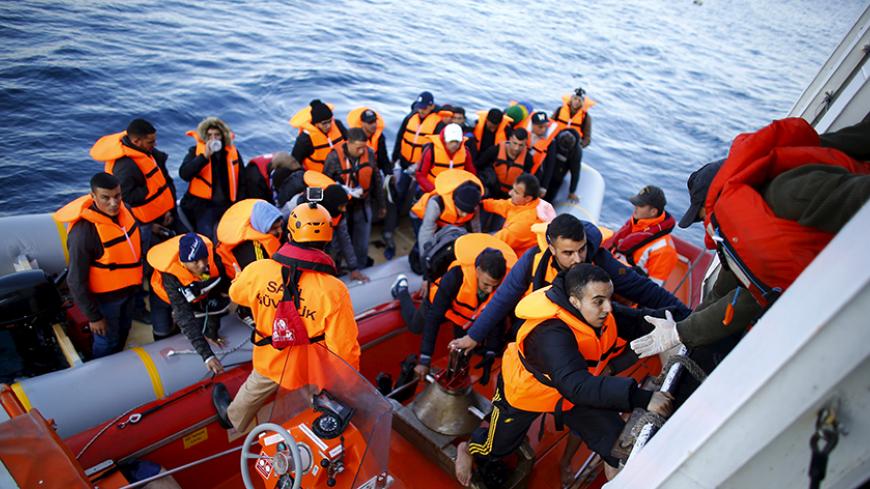 Refugees and migrants board the Turkish Coast Guard Search and Rescue ship Umut-703, off the shores of Canakkale, Turkey, after a failed attempt at crossing to the Greek island of Lesbos, Nov. 9, 2015. - REUTERS/Umit Bektas

In an interview before her recent visit to Istanbul, German Chancellor Angela Merkel said she would refuse Turkey’s request for EU membership, adding that she sees accession negotiations as an open-ended process. Given that position, it is hard to think of Germany's proposal to pay Turkey 3 billion euros ($3.2 billion as of Nov. 18), ease visas restrictions and expedite accession negotiations as sincere and realistic.

European Union leaders meeting at the EU-Africa migration summit Nov. 11-12 in Malta agreed, at least in theory, to pay Turkey 3 billion euros to stop the refugee flow to Europe or slow it down; to reinforce Turkey’s border controls to prevent access to Europe; and to improve the conditions of refugees in Turkey.

Specific conditions of the assistance and the necessary agreements will be discussed at an EU summit that Recep Tayyip Erdogan plans to attend at the end of November.

Germany is spearheading the initiative with Turkey to secure EU borders. According to Turkish daily Vatan, more than 60% of the refugees trying to reach Europe want to go to Germany and are prepared to risk everything to do it.

Merkel’s one-day visit to Turkey immediately before the Nov. 1 elections — a visit severely criticized in her country — indicates the scope of Germany’s concerns. The visit focused on expediting visa exemptions to Turks and opening new chapters in EU accession talks, in addition to the offer of 3 billion euros in assistance.

Turkish Deputy Prime Minister Numan Kurtulmus said in September that Turkey has spent some $7.6 billion for Syrian refugees without any outside aid. Erdogan, in his trip to Brussels in October, said Turkey had spent $8 billion, warned that Turkey could no longer carry this burden alone and asked for assistance.

Taking these figures into account, Turkey is spending $500 million a month just on the refugees living in the camps.

But Turkey's expenditures are bound to increase, as it plans to provide free doctor visits, hospital treatments and medicine to more than 2.2 million Syrians scattered all over the country, as well as free education to more than 300,000 Syrian children and other economic and social support measures.

Against the $8 billion Turkey has spent for the refugees until now, the EU is offering 3 billion euros in two installments to head off new refugee waves to Europe.

Turkey has to be realistic and careful about the goodwill and feasibility of the EU’s proposal to expedite visa exemption negotiations. Greek Cypriot Foreign Minister Yoannis Kasulidis has already refused to lift the unilateral veto on Turkey’s accession. Hungarian Prime Minister Viktor Orban said 3 billion euros wouldn't help anything and rejected the proposal.

In the aftermath of the Paris massacre, Poland declared that not only won’t it accept the EU’s refugee acceptance quotas, it will not receive any refugees. Eastern EU members particularly are sidestepping the quotas drawn up by the EU to determine the number of refugees each should accept.

Another point of contention will be the Dec. 16, 2013, agreement between the EU and Turkey for accepting refugees who are returned. According to this agreement, Turkey will be obliged to accept refugees who have reached the EU via Turkey. The EU has promised to ease visa procedures to Turks after 2017 for accepting the return of refugees. Turkey wants visa exemptions to go into effect by July 2016.

The EU commission has proposed granting Turkey “safe country of origin” status, which is usually reserved for more developed countries. If that happens, the EU’s latest progress report on Turkey that declared “basic rights and democracy have regressed in Turkey” becomes meaningless. EU members can deport refugees by returning them to “safe” countries. Last year, Germany deported 11,000 Roma (also known as gypsies) who originated from Balkan countries, sending them back to their “safe” countries.

The strongest reaction in Turkey to the EU promises came from the Turkish Industry and Business Association (TUSIAD), which had been the strongest proponent of Turkey’s EU membership.

“Turkey cannot be a buffer zone or gate guard for the EU in return for petty political and financial incentives,” TUSIAD President Cansen Basaran Symes said.

One of Turkey’s veteran EU experts, Can Baydarol, labeled the EU’s approach an “indecent proposal.”

In short, Europe — squeezed between the Paris massacre and questions of Islamic terror and refugees — is trying to buy Turkey for 3 billion euros while not offering anything concrete on visa and accession issues. The EU and Germany, by ignoring the humanitarian aspects of the question and focusing on monetary angles, have failed the test of their goodwill.