The consensus on the resolution of the Syrian refugee crisis by Turkey and the European Union may not last long due to its fragile framework. 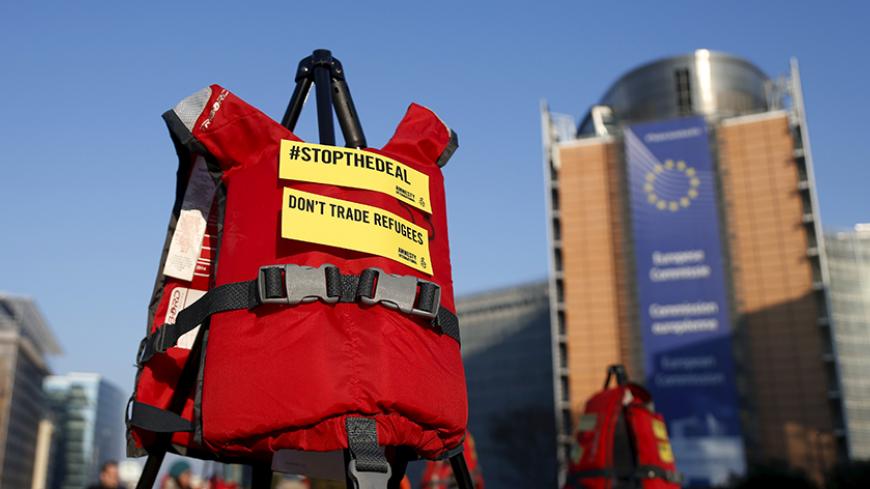 Life jackets are pictured in front of the European Commission headquarters during a protest by Amnesty International to demand the European Council protect the human rights of the refugees within the EU-Turkey migration deal, ahead of an EU summit over migration in Brussels, Belgium, March 17, 2016. - REUTERS/Francois Lenoir

Turkey-European Union relations, which had been unofficially frozen, are now thawed in order to find a solution to the Syrian refugee crisis.

The EU reluctantly coming to the table with Turkey to stem the refugee waves seems to have yielded some results after tough negotiations: It now has the right to send the refugees back to Turkey and also has been promised an increase in border security measures by Turkey.

In turn, Turkey has been promised 6 billion euros (roughly $6.8 billion) of financial aid for the refugees in the country, visa exemptions for Turks after a set of criteria are fulfilled and the launch of a new chapter to reanimate the EU membership process.

While the discussions on who benefits the most from this deal continue, a more important question is raised: Will it be possible to implement this agreement?

The experts stress that even if the parties reach an accord, there could be complications in the implementation process because of the fragile framework of the agreement. Financial aid to cover assistance for the refugees is probably the least controversial.

In regard to the visa exemption, Sinan Ulgen, the president of the Center for Economics and Foreign Policy Studies, told Al-Monitor that the deal on the exemption of visas for Turks is hard to implement due to a possible opposition of EU member countries. Ulgen, stating that there will be objections against the exemption within the EU, said, “For example, countries like France — which are less affected by the refugee crisis — will not be inclined to grant visa exemption. France does not feel the refugee pressure like Germany and therefore does not support the exemption process. Maybe this will be the weakest point of the agreement until June 2016.”

Turkey has until April to comply with 72 different criteria in order to obtain the visa exemption for the European Union.

According to Cengiz Aktar, an EU expert and a former official with the UN refugee agency, UNHCR, it is impossible for Turkey to comply with these criteria. He told Al-Monitor, “Visa exemption is a merry-go-round. Among the 72 criteria there is the Council of Europe Convention on Human Trafficking; the Council of Europe Convention on Laundering, Search, Seizure and Confiscation of Proceeds of Crime; and the Convention on Anti-Money Laundering and Combating the Financing of Terrorism. These agreements are signed but they are not being implemented at the moment."

Aktar said, "There is also a stipulation on establishing an independent commission on monitoring human rights violations by the security forces. There are many criteria. Turkey will be labeled a democratic country if it can implement all of them. Europe for the time being seems to go along with the negotiations, although it knows that these criteria will not be met.”

He added, “The implementation process will be evaluated after the agreement is signed and it will become clear in June 2016 that it will not happen."

Meanwhile, objections are already being heard from Europe. Frans Timmermans, the vice president of the European Commission, said that the visa exemption for Turkey depends on the requirements and that there is no "shortcut" for this. Timmermans, noting that the visa exemption will not be easy to accomplish, also said the requirements must be met by April.

But the most important topic for the EU is certainly the extradition of refugees.

The negotiation of the readmission agreement, which is jointly discussed with Turkey’s visa exemption for the EU, is not a new idea. Turkey, upon signing the agreement, promises to take back the refugees who originated from the east of Turkey and migrated to Europe. However, experts again warn there might be legal disputes with this agreement. Turkey being a signatory of the 1957 Geneva Convention and the added protocol of 1967 does not recognize asylum seekers as refugees. The refugees in the country are only accepted as “guests.” Here we can talk about an extended protection exclusive to the Syrian refugees but no one has full refugee status. This may lead to a debate on Turkey not meeting the directives of the European Parliament on readmission of refugees in a “safe third country.”

According to EU law expert Steve Peers of the University of Essex and Emanuela Roman, a visiting researcher at Vrije Universiteit in Amsterdam, Turkey fails to meet the requirements of being a “safe third country" because it does not recognize the refugee status, not to mention the increasing claims of torture and maltreatment of refugees. Human Rights Watch and Amnesty International have published reports on maltreatment of refugees in Turkey. As a result, it is held that according to European legislation, the refugees cannot be readmitted to Turkey.

According to Aktar, the rate of implementation of readmissions will be very low. He said, “Those who migrated will do whatever it takes not to return. The rate of return will not be over 5%.”

The official count of Syrian refugees in Turkey is 2.7 million. According to the International Refugee Organization, the number of refugees who transited to Europe via Turkey was 700,000 in 2015 and so far this year more than 152,000 have crossed over. So far this year, at least 456 refugees have died on their travel via this route.

Considering the hasty negotiations pressured by these figures, it is highly uncertain that the parties, which are reluctant partners and do not trust each other, will fulfill their commitment. The opposition from some EU countries exposes the fragile framework of the agreement. While Italian Prime Minister Matteo Renzi said Turkey must show progress on freedom of speech and media, Cyprus has clearly declared that it would veto Turkey’s EU membership.

Declarations from France, Cyprus and Italy indicate that even if new chapters are initiated for Turkey's EU membership process, they will not be finalized.

Despite all these challenges and doubts, for Turkey, which is going through a tough political process, the agreement and the resurrection of the EU membership application brings hope.

EU expert Can Baydarol said that despite the potential complications, the agreement may also be promising for Turkey, which is now seeking a new course. “There are challenges on reaching an agreement. The EU membership of Turkey will not be easy, although some new chapters are decided on. On the other hand, politically we are going through a tough time. We need hope like this, even if it is flimsy. This agreement may be an incentive for us,” he said.