Netanyahu's gushing over Obama meeting convinces no one

Despite Prime Minister Benjamin Netanyahu's effort to present his meeting with President Barack Obama as successful, he achieved little, and the Obama administration was considerably less enthusiastic about it. 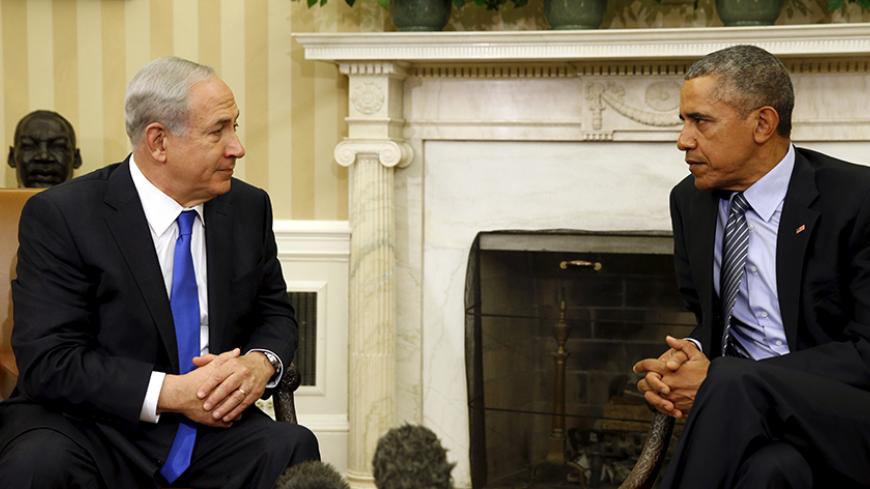 Three main questions remain unresolved in the interminable soap opera that is the relationship between Israel and the United States and President Barack Obama and Prime Minister Benjamin Netanyahu:

It is still premature to answer these questions. Netanyahu himself didn’t get clear answers to any of them when he was at the White House. Now, it’s his turn to sweat. He has been a nuisance to the president for many long months, forcing him to employ the entire well-oiled presidential apparatus to pass the nuclear deal. There is no reason to make things easy for him now.

It was odd analyzing the descriptive terms and body language of both parties following Netanyahu and Obama's first meeting in over a year. Netanyahu looked and acted like a groom on his wedding day. He was all smiles. In fact, he was so pleased and excited that he described the meeting as “fantastic” in his internal briefings. He even went so far as to say, “It may have been the best meeting that we’ve ever had.” Well, between these two men, that wouldn’t take much. What Netanyahu did not mention is that this "fantastic" meeting with Obama took place after it was all over between them. The two men are just like a divorced couple. They have already reached their separation agreement and decided who gets what. Now they are trying to part ways amicably and wish each other the best of luck in their new lives.

It sounds somewhat different from Obama’s side. Sources surrounding the president have been grinning at Netanyahu’s enthusiasm. From an American perspective, the meeting could be described as reasonable, or maybe even better than reasonable, but no more than that. It was a meeting for the record, intended to turn the page and look forward. That is very typical for Obama. If the president wanted to embark on a real honeymoon with his “ex,” he had quite a few opportunities to show it. He could have let Netanyahu stay at Blair House (the president’s official guesthouse). He could have held a joint press conference with the prime minister (instead of sending his press secretary to brief the media while the meeting was underway). He could have intervened in the release of Jonathan Pollard (and allowed him to fly to Israel upon his release). He could have said a few nice things about Netanyahu during their joint photo op. He could have promised something meaningful from among the things that Netanyahu considers important. He did none of the above. Obama neither forgives nor forgets. He has no reason to, but at the same time, he is a cool-headed individual who does not act out of a need to retaliate. He always tries to be practical instead.

There can be no doubt that when Obama looks back and reviews his presidency, Netanyahu will receive the lowest marks of all leaders that he was forced to work with, mainly because the president was never forced to work with Kim Jong-un. None of that changes the fact that Obama may not like presidential candidate Hillary Clinton personally, but he does want the Democrats to win the next presidential election so as to preserve his legacy and continue his policies. That is why he has no interest in another clash with Netanyahu. He already won. Passionate, well-publicized victory celebrations don’t do it for him. What he is looking for is a way to maximize the little he can from his setbacks in the Middle East in general and the Israeli-Palestinian issue in particular.

Right now, Obama and Netanyahu are at a draw. Obama defeated Netanyahu on the Iran nuclear issue, while Netanyahu defeated Obama on the Palestinian issue. (The status quo has been maintained and there is no more prattling about peace.) When it comes to the Palestinian issue, Obama would be quite happy to shift the balance in his favor, even if only slightly, but he will not delude himself about that. It is too late for a knockout.

Netanyahu set off for Washington with a political agenda. His objective was to prove to Israel’s center-left electorate that he has not lost any significant assets in Washington because of the war that he has been waging with Obama over the past year. That is why he describes the meeting so positively. What Netanyahu is telling the Israelis is, “Look, I proved that it is possible to raise the banner of rebellion, even when confronting the president of the United States. It is possible to stand on principle, rather than succumb until the very last moment, and it is possible not to pay a price for that.” The mood in the defense establishment is somewhat different. It is clear to most defense officials that if Netanyahu had discovered this moment of goodwill half a year earlier, or immediately after the signing of the nuclear agreement, the Americans would be willing and open to offer more in response to at least some of Israel’s requests. The answer will only be determined over the next few months, when the staffs of both sides complete their work.

In his Nov. 10 address to the Center for American Progress, a progressive think tank in Washington, Netanyahu dropped a small bombshell when he said that he does not reject the possibility of Israel taking unilateral steps in the West Bank. He did, however, place conditions on any such steps, saying it “would have to meet Israel’s security criteria. It would require a broader international understanding than exists now.”

The dwindling number of supporters of the peace process in Israel can stop celebrating. Netanyahu is not heading toward anything like the Gaza disengagement, not now and not later. He supports such a move the same way that he supports a two-state solution. It’s maybe a good idea in principle. On the other hand, the conditions he attaches to it make it virtually impossible.

This statement by Netanyahu could be linked to the intense negotiations constantly underway with the chairman of the opposition, Isaac Herzog, over bringing the Zionist Camp into the coalition. Netanyahu realizes that Herzog cannot enter a far-right government and will have to present his party with real incentives if he wants to convince them to support joining the coalition. A moderate, pragmatic Netanyahu who talks about a “unilateral move” on the West Bank is a Netanyahu with whom they can do business, at least for all appearances.

This leaves us with Obama’s big dilemma. Should he lay out his “framework for an agreement,” or should he shelve it? We presented the principles of that agreement and disclosed that it had already been shown to President Mahmoud Abbas. The draft that Obama showed Abbas was a revised and amended version of what was presented during the negotiations with the Israelis and included the explosive wording “two capitals in Jerusalem.” Obama can put this document on the table in the window between the presidential election and the time he leaves the White House, just like former US President Bill Clinton did before him. It would be a great way to enter the annals of Middle Eastern history in a respectable manner, while leaving the nightmare for Netanyahu to deal with. All that the president has to do now is to decide.