US Secretary of State John Kerry should table an American peace proposal and step away. 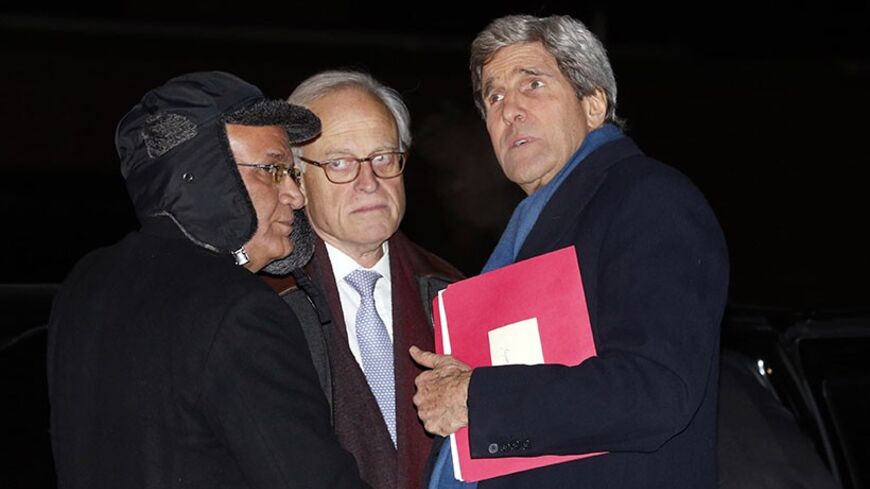 Israel is concerned that Martin Indyk, chief of the American negotiating team and former US ambassador to Israel, will tender his resignation shortly. According to reliable information received in Jerusalem, Indyk will return the keys and resume his post at the Brookings Institution. On April 29, the nine months allotted to the Israeli-Palestinian negotiations had run their course. What will also run its course is Indyk’s leave without pay. It is believed that in light of the stalemate in the talks, Indyk will not extend his leave and will walk away from the negotiations. However, a final decision has yet to be made. An explicit request from US President Barack Obama or Secretary of State John Kerry might change that.

“It’s such a pity that John Kerry fostered some of the traits of [Prime Minister] Benjamin Netanyahu,” a senior member of Israel’s shrinking peace camp said on the night of April 28, in a personal, closed talk. As someone who has been closely following the peace process and is in the swim, what he was referring to was Kerry’s reverberating statement, which also was said in a “closed talk.” What the secretary of state said was that unless a two-state solution was achieved, “a unitary state winds up either being an apartheid state with second-class citizens — or it ends up being a state that destroys the capacity of Israel to be a Jewish state.”

The Israeli speaker's reference to Netanyahu involved a well-known Jewish saying talking about how his conduct will always lead him to eat rotten fish, and get driven out of town as well — meaning that his behavior pattern always leaves him both empty-handed and humiliated. After all, the Israeli speaker notes, Kerry said the right things, which are also being voiced publicly here. Even Netanyahu has been using recently the idiomatic phrase of "danger to the Jewish majority." So, why does the secretary need to panic and apologize and take it all back? Ultimately, Kerry spoke up, drew lethal criticism from the Republicans, was forced to retract and by doing so he undid the impact his statement should have left on the parties — yet at the end of this loop, he found himself battered, beleaguered and humiliated. And this, says the Israeli source, is simply because he dared spell out the truth.

Kerry’s statement, published in The Daily Beast, was made on the eve of Holocaust Remembrance Day in Israel, April 27. Last year, I published an article here, referring to the Holocaust as the Israeli narrative, whose impact on shaping the country's mindset and image is enormous. A day earlier, April 26, Palestinian President Mahmoud Abbas released an unprecedented statement, calling the Holocaust “the most heinous crime ever perpetrated against humanity.” And what do you think the official Israeli reaction was? Abbas’ statement elicited a long, derisive snort. From Netanyahu to the last right-wing Knesset member, nobody addressed the real merit of what Abbas had said. That, however, did not stop any of them from quickly arguing that you cannot recognize the horrors of the Holocaust while at the same time forging an alliance with Hamas — an organization that denies the Holocaust and seeks to annihilate Israel. Although this assertion is somewhat founded, these reactions nevertheless attest to the Israeli mindset. Israel looks only in the convenient direction, seeing only the half-empty glass. It ignores any positive element. It keeps searching high and low for any random excuse, pretext or something to latch onto to prove that there is nobody to talk to, that there is no point in talking and that peace doesn’t stand a chance.

In Israel, Abbas is considered to be a “Holocaust denier” because of his much-hyped doctoral thesis that was written ages ago in Moscow. The truth of the matter is that he did not deny the Holocaust. What he did claim was that it is possible that the number of Jews who perished in the Holocaust had been exaggerated. Several dozen years have passed since then. Abbas’ most recent statement was worded in a way that leaves no room for interpretation. The official Palestinian leader regards the Holocaust as a heinous crime against humanity. He does not try dwarfing or obscuring it. Nor does he ignore it. Ostensibly, Israel does not need anything more than that. Had we had a true peace-seeking leader, he would have taken Abbas’ statement to be an opportunity, a positive lever, a hand that is reaching out. Instead, Netanyahu quickly cowered in his corner.

For years, Israel has been contending that there is no point in talking to Abbas since he does not represent the entire Palestinian people. Given that the Gaza Strip is cut off from the West Bank and that Hamas recognizes neither Abbas nor his contacts with Israel — what’s the point? But lo and behold, a reconciliation agreement between the West Bank and the Gaza Strip has been brokered. Hamas is not blusterous. There is talk about a government of technocrats that would be accredited to negotiate with Israel. But it’s the same old tune again: Launching a counterattack, Israel resorts to bluster. Calling it quits, it has suspended the negotiations.

Why not make the Palestinians rise to the occasion? Why not welcome the unification, provided that the new Palestinian government accepts the Quartet’s three conditions (that Hamas recognize Israel, accept past agreements between Israel and the Palestine Liberation Organization (PLO) and renounce the armed struggle)? Isn’t this what we have dreamed of during all those years? Truth be told, Hamas is defined as a terrorist organization, which is exactly what it is. This is how it is defined in the United States, Europe and certainly in Israel. But even the Irish Republican Army (IRA) was a terrorist organization, and so was the PLO before signing a peace accord with Israel. No, I really don’t think that Hamas has any intention of converting to Judaism anytime soon or joining the ranks of the Likud Party. The chances for peace between Hamas and Israel are slimmer than the chances that Vladimir Putin, the Russian president, will give up Crimea. The thing is that Israel must earnestly strive for peace and exhaust every avenue and every chance that comes its way rather than the other way around. And the way Israel acts today is exactly the other way around.

Let’s go back to Kerry: The statement he made in that closed talk and published this week did not end just with the risk of Israel turning into an apartheid state. To my mind, what he said later was even more interesting. Kerry said — and I paraphrase — that only a political change in the government could improve the chances of achieving peace. In other words, given the current leaderships — crossing the Rubicon, making tough calls, knocking down the walls and going the extra mile is a mission impossible. This is a resounding statement. Just imagine an Israeli spokesperson saying a similar thing on the eve of the US presidential elections. No, wait a second. I actually take it back. After all, the official Israel — that of Netanyahu, Israeli Ambassador to Washington Ron Dermer and casino mogul Sheldon Adelson — had worked tirelessly to oust Obama in the last elections. It also operates today, openly and fearlessly, on behalf of the Republican Party (Dermer gave a talk at the “auditions” Adelson held for the Republican presidential hopefuls in Las Vegas several weeks ago).

What was Kerry aiming at? Israeli political and diplomatic officials believe that in terms of the Israeli side, Kerry did not intend to have Netanyahu replaced. Rather, he was alluding to a different makeup of the coalition. The current one, consisting of the ultra-right HaBayit HaYehudi Party, is not a coalition that can take the path of peace. By replacing HaBayit HaYehudi with the Labor Party, for example, Netanyahu would be able to get the latitude he needs to be delivered from the shackles and march forward. This, provided he can keep together the Likud Party, most of whose members are opposed to any progress. For months, the Americans have been applying pressure — quiet albeit consistent — on Labor Party Chairman and Knesset member Isaac (Buji) Herzog to agree and announce his willingness to join Netanyahu’s government, if and when. Herzog knows that such an announcement could herald the end of his political career. He is not yet ready for this. Such a move would be possible only if real progress in the negotiations were made and not only to artificially extend the deadline that would result in another dead end.

But Kerry isn’t complaining only about Israel. To botch up this tango, you needed to have a pair of two left feet. Israel contributed its share, but so did the Palestinians. In a closed meeting last weekend, Tzipi Livni, the justice minister, bewailed that in the past month alone, shortly before signing a deal, the Palestinians acted, on three different occasions, like a cow that kicks over the nearly full bucket of milk. The first time, she observed, they did it when they refused to say “yes, but” to Kerry’s framework agreement. Netanyahu, incidentally, did say yes. The second time was when at the bottom of the ninth inning they blew up the deal to release the prisoners and Jonathan Pollard. The deal was completely finalized, Livni told her interlocutors, including the terms for Pollard’s release to Israel. And then Abbas submitted his request to join 15 international treaties, shocking the Americans and Israelis and blowing up the whole deal. The third time occurred most recently when Livni submitted to the Palestinians a far-reaching proposal that would have allowed them to build in Area C, which is under Israeli control. That proposal was supposed to release the deadlock, thus facilitating an atmosphere that would have produced a deal to extend the negotiations. One day after introducing the idea in a trilateral meeting between the parties, which was said to be “good,” the unification between the PLO and Hamas was announced and the cards were reshuffled yet again. “So how can you not go crazy?” she asked her interlocutors.

Given this state of affairs, what is left for the Americans to do — finally — is to do the right thing. They need not panic; they need not repeat the mistakes of the past and they need to keep their eyes on the ball. Kerry would be well-advised to present to the parties the framework agreement that he has drawn up and define it as an American proposal for an arrangement. He should put it on the table and step away from the ring. At the same time, there is no point remaining afraid, hesitating, being panicked and choking when people from all across Capitol Hill come charging. Kerry is telling the truth. Netanyahu knows that, Obama knows that, even the Republicans know that. Anyone who is so afraid of the truth is bound to drown in a pile of lies.