Unlike their strong interest in issues such as housing prices or banking reform, Israelis are not engaged with the battle against Prime Minister Benjamin Netanyahu's natural gas plan. 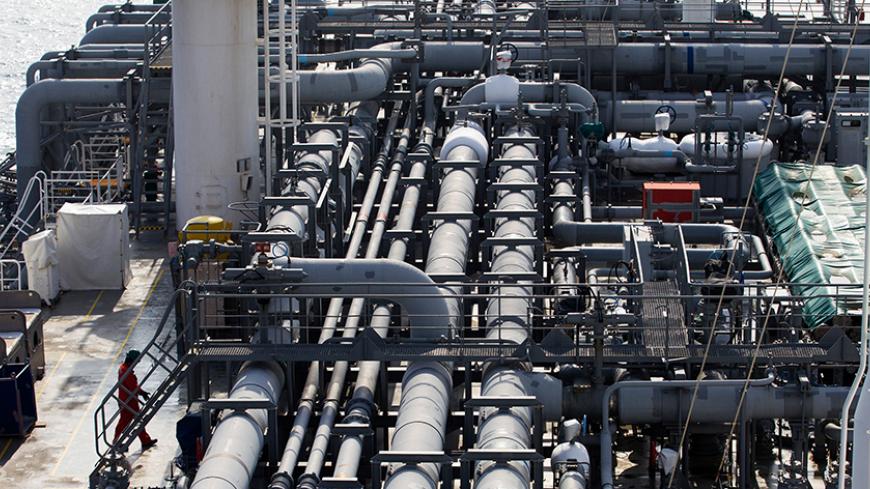 Pipes carrying liquefied natural gas are seen on a tanker in the Mediterranean, some 6 miles from the coastal Israeli city of Hadera, Jan. 22, 2014. - REUTERS/Baz Ratner

Despite numerous demonstrations against the Israeli government's plans for an offshore natural gas field, there is little chance opposition will grow strong enough to derail its approval.

A Nov. 7 demonstration against Prime Minister Benjamin Netanyahu's outline for natural gas resources and benefits distribution drew a few thousand people, but not as many as organizers had expected. And even though the protest at Habima Tel Aviv Square was held in the pouring rain on a Saturday night, the rain can't be blamed, since tens of thousands of people attended soccer games that night despite the weather.

The Israeli public just doesn’t connect with claims that the government is engaging in “exploitation” and “theft against the public” in its plans to develop natural gas reservoirs discovered off the coast. The protesters were mostly members of social justice organizations, professional activists and a crowd of politically active young people. It wouldn’t be a wild guess to say that the vast majority of those who showed up were associated with the political left, — that is, the Labor and Meretz Parties — and further left.

Protesters see the proposal as governmental injustice opposed to the public interest. But — without discounting the act of thousands who came out to protest on an especially rainy day in Tel Aviv and cities like Beersheba and Jerusalem — it’s hard to believe that this issue will revive the Israeli social protest and bring tens of thousands of people back to the streets. For Netanyahu, who is now jogging toward the finish line of authorizing the gas plan — after clearing the last hurdle and taking upon himself the authorities of the Ministry of the Economy from Minister Aryeh Deri — there is no reason to worry about significant public resistance.

Most of the public is not well-versed in the details of the complex issue and hasn’t been convinced that the plan is so bad. What's more, in the spirit of the summer protest of 2011, the gas plan as first formulated has been immeasurably improved, following recommendations of the Sheshinski Committee that the Likud government established.

A poll publicized in July by Channel 2 examined public involvement in the gas issue, which was at the center of political and media discourse at the time. The main finding showed that 72% of the public either supports the plan or does not understand it, and only 28% oppose it. The poll was conducted after the gas issue received months of prominent media coverage. The reason for this was also more political than economic: The media was interested in the repeated failure of Netanyahu to authorize the plan because of constraints in the Knesset and the government. After he overcame almost all of the roadblocks, Netanyahu encountered Deri, head of the ultra-Orthodox Shas Party, who as minister of the economy refused to approve a controversial paragraph in the bill. The clause would have enabled the circumvention of the antitrust commissioner, curtailing the bureaucratic processes and authorizing the plan.

Deri’s position was confusing and strange: On the one hand, he refused to bypass the antitrust commissioner and bring about the authorization of the plan; on the other hand, he voted for it in the government and the Cabinet. In the end, a roundabout solution was found: Deri parted from the Ministry of the Economy and was appointed minister for development of the Negev and Galilee with broad authorities. And Netanyahu, who is already foreign minister, communications minister and, until recently, health minister, took over the economy portfolio as well. This political ploy was the trigger for the Nov. 7 protest.

The chief organizers of the protest, along with politicians identified with the protest such as former chairwoman of the Labor Party and Knesset member Shelly Yachimovich, say the political move is corrupt and constitutes capitulation to tycoons at the expense of a natural resource that belongs to the entire Israeli public. But judging by the number of protesters, it seems the public wasn’t inspired by this argument. In contrast, at the beginning of October, a protest was held in Tel Aviv against cruelty to animals. According to police estimates, 10,000 people attended it.

The protesters' social media posts accuse Channel 2 and the Yedioth Ahronoth daily of ignoring the protest because of commercial interests. According to the protestors, the owners of both mainstream Israeli media would be involved financially in the forthcoming gas plan. But even this claim sounds like an excuse, because in the era of social media and with the tailwind of coverage by a leading financial newspaper like The Marker, no media outlet could ignore an authentic and widespread protest. On the contrary, the mainstream media, motivated as they are by ratings, would have jumped on the opportunity to broadcast live from the field if the protest had really roused the general public. It didn’t happen, because the gas protest is perceived by the public as a niche of the radical left — an internal discussion, for the time being, of social justice activists — that hasn’t gained wider popularity even through social media.

Another element instigating the protest was the airing of the program “The Silver/Money Tray” by Doron Tsabari. The three-part series, which premiered at the beginning of the month and became a viral hit, describes three heroes from the realm of Israeli socioeconomics: journalist Guy Rolnik, founder of The Marker; Yaron Zelekha, former accountant general in the Ministry of Finance; and professor Danny Gutwein, a social activist with a classic socialist worldview. The huge number of views the series received — half a million on YouTube alone, as of the writing of this article — shows that Israelis, post-2011 protests, are involved, aware and very interested in change. But even though the public has become more critical of the existing economic system in recent years, it is still confused when it comes to formulating and advancing alternatives.

What’s clear is that while the public has a visceral understanding of the housing crisis, the distorted cost of living and the lack of competition among banks, it hasn’t been convinced that the gas issue is such a grave problem or that it involves political corruption.

In the political arena, too, not all of Netanyahu’s rivals oppose the plan. Though Avigdor Liberman, chairman of the Yisrael Beitenu Party, and Yair Lapid, chairman of Yesh Atid, did oppose bypassing the antitrust commissioner in the Knesset vote, this was done in protest of the way the plan was brought for authorization and to make things difficult for the prime minister, more than to oppose the plan itself.

Even in the Zionist Camp, there are those who think the opposition of Yachimovich and Knesset member Eitan Cabel is nothing more than blind populism. They are not willing to publicly air their views on the topic out of fear that their reputation would be damaged among the public. This situation in the political sphere shows once again that opposition to the gas plan is far from becoming a mass protest that could threaten Netanyahu's intentions of going forward with the plan.