In an interview with Al-Monitor, Zionist Camp Knesset member Eitan Cabel said he will fight to ensure that any deal to exploit Israel's offshore natural gas will be in the public's best interest. 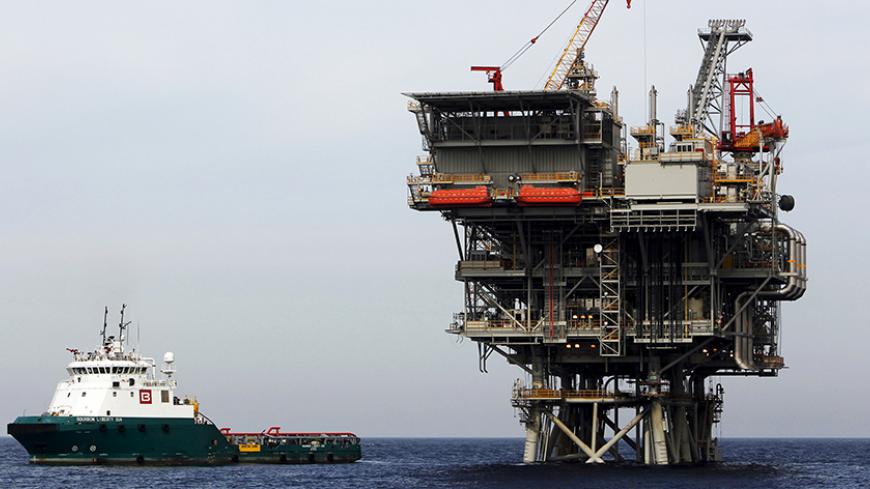 An Israeli gas platform, controlled by a US-Israeli energy group, is seen in the Mediterranean Sea, some 24 kilometers (15 miles) west of Israel's port city of Ashdod, Feb. 25, 2013. - REUTERS/Amir Cohen

Zionist Camp member Eitan Cabel was selected June 1 to chair the much-coveted Knesset Economic Affairs Committee, beating the former chair of his own party, Shelly Yachimovich, in a secret ballot by the faction. In addition to being a demonstration of his political clout, the victory awarded Cabel the chairmanship of one of the Knesset’s most important committees in terms of economic reforms. Chief among such issues will be the one concerning the country’s vast and rich natural gas deposits discovered offshore.

For a few years now, the government has been negotiating the development and distribution of these resources and earnings with gas companies. The topic remains a constant on Israel's public agenda, which will bring Cabel media prominence and a chance to influence the final outline of a gas deal.

Cabel believes that the current proposed deal runs counter to the public interest and could very well strengthen the monopoly of the gas companies, so he is prepared to wholeheartedly engage in the battle. He plans to raise an open public debate on the gas deal through his committee and told Al-Monitor that the deal ultimately approved will be entirely different and better for the public compared to the one the government has recently tried to stealthily pass.

In partisan politics, Cabel is considered a close associate of Isaac Herzog, leader of the Zionist Camp, which also incorporates the Labor Party. As such, Cabel is trying to have the Labor's constitution amended. The current constitution stipulates that in case of failing to win an election, the party must hold primary elections within 14 months. Cabel is hoping to postpone the primary to provide Herzog with the quiet needed to prepare the party for the possibility of new parliamentarian elections, which could suddenly arise, given that Prime Minister Benjamin Netanyahu’s 61-member government is only one member shy of falling.

Al-Monitor:  Prime Minister Benjamin Netanyahu has accused the detractors of the gas deal, including the Zionist Camp, of chasing away the gas companies, thereby keeping the gas buried in the ground. Does such a scenario concern you?

Cabel:  Unlike Bibi’s [Netanyahu] intimidations, the natural gas won’t remain buried underground. These are lies and fabrications. On election day [March 17], he also sought to intimidate voters by saying that Israeli Arabs were getting on buses in droves on the way to the ballot boxes.

To my mind, this is not even a political question. I’d like to remind people that those who were initially at loggerheads with the government were not the politicians, but rather Antitrust Commissioner David Gilo as well as State Comptroller Joseph Shapira. I would also like to remind Netanyahu that the one who, on June 25, threw a spanner in the deal was his own minister of economy, Aryeh Deri, who said that the deal had to be modified. Moshe Gafni, the chairman of the finance committee from the Yahadut HaTorah, says his heart belongs with us. And these two gentlemen are members of Netanyahu’s coalition. So before singling us out, they had better check where it all began.

Al-Monitor:  Will the economic affairs committee be a stumbling block in approving the deal?

Cabel:  This will be the most dramatic socioeconomic decision affecting the Israeli public for the next 50 years. This is why this isn’t an issue of coalition or opposition. This is an issue of national responsibility. My starting point is that the deal needs to be amended. It’s very important to me that the Economic Affairs Committee lead the public debate, which I personally believe is not being conducted appropriately. After all, what the government has done so far, supposedly having opened up the issue for public discussion, is a joke. It’s the biggest lie ever. They did what they did so that one day when they face the Supreme Court, they can say that there was a public hearing. But I’ll make sure that the public is fully aware of what is going on with the gas issue and that no information is withheld from it.

Meanwhile, the only place where a real debate is taking place is the Economic Affairs Committee. What I’d like is for the public to fully understand what is going on with the gas issue, because it pertains to the future of their children and grandchildren. Unfortunately, for the time being, the public is clueless about the topic, thinking we’re talking about cooking gas cylinders. I submit with almost certainty that the deal presented at the beginning of July will not be the one ultimately approved. I can’t say to what extent it will change. What I can say with certainty, however, is that it won’t be the same deal that will ultimately be signed. In the end, the deal will be much better for the public at large.

Al-Monitor:  This week, for the first time since the elections, the coalition was defeated in a vote in the Knesset, over the gas deal outline. Will the Zionist Camp accept joining a Netanyahu government to strengthen his coalition?

Cabel:  If we only had 15 seats, I believe we would have already been part of the government. But we have 24 seats, and that’s a great responsibility. Nor have I heard the prime minister saying he would be interested in seeing us join his coalition. He hasn’t called us. And we’re also not interested in entering the government only so Herzog can be named foreign minister or defense minister. At this time, the opposition in the Knesset is becoming more cohesive. Because of the tension between [former Foreign Minister and right-wing Yisrael Beitenu Chair] Avigdor Liberman and the Arabs [Joint List], it is not a homogenous opposition. What we are seeing, though, is that when the opposition wants something, it rallies together and unites. The fact remains that we prevented the government from having a majority vote in its bid to bypass the antitrust commissioner in connection with the gas issue. All in all, we’re doing a fairly good job.

What stands out is the fact that the coalition has no respite. They sleep with their shoes on, like soldiers in boot camp. They never know when we will take them by surprise. They can’t let their guard down for even a minute, because we’re always en garde. We only need that one time to topple them. With their 61 seats, that is, one-seat majority, they need 100 percent attendance during Knesset votes. It’s still too early to predict the fate of this government, but when it comes to the opposition, there’s great potential here. As long as Liberman remains in the opposition, we stand a great chance of toppling this government.

Al-Monitor:  Is Herzog threatened by the possibility of moving up the party primary elections and the possibility that the mayor of Tel Aviv, Ron Huldai, might run against him, supported by Shelly Yachimovich?

Cabel:  With all due respect to Shelly Yachimovich and Ron Huldai, they don’t pose a threat to Herzog. But it’s their right to run for election. In my opinion, there’s a sense of ingratitude toward the chairman. In the end, they should also be able to say “thank you.” He delivered a major achievement in the last parliamentary elections, the likes of which the party had not seen for 20 years. So what is it they want? I think we need to give him a chance to stabilize the party. We should not repeat our usual mistake of lopping off the heads of the party leaders. This is why I’ve joined those in the party who think that the primary for the party’s leadership should be put off, instead of 14 months as the current constitution stipulates, to 30 months. Why punish Herzog for his accomplishment? Can anyone from the current cadre provide a similar achievement and break the glass ceiling we’re facing? I believe this initiative will have a majority, and I will certainly take measures to promote it.

Al-Monitor:  This achievement notwithstanding, do you think the Zionist Camp succeeded in displaying a coherent political identity?

Cabel:  ​Unfortunately, it is true that we do not have a diplomatic security narrative. When it comes to security matters, I think we should start using terminology similar to that of the Likud. Instead of constantly dealing with the question of whether or not to give back territories, we need to adopt another language. We need to stop talking in terms of giving back [land]. Not because I’m afraid of our opinions or think we need to change them, but simply because this isn’t the right time for it. We need to speak in terms of losing the Jewish state and the end of Zionism. These are the processes currently taking place because of the fact that there’s no diplomatic process at this time. We need to tell the public that unless we do something, what we will end up having here is another Sarajevo or Kosovo. We need to create a diplomatic security narrative that will show the public that the battle isn’t about two states but about a Jewish one.