Garbage is piling ever higher across Lebanon as political parties refuse to allow waste from outside their areas to be disposed in their constituency. 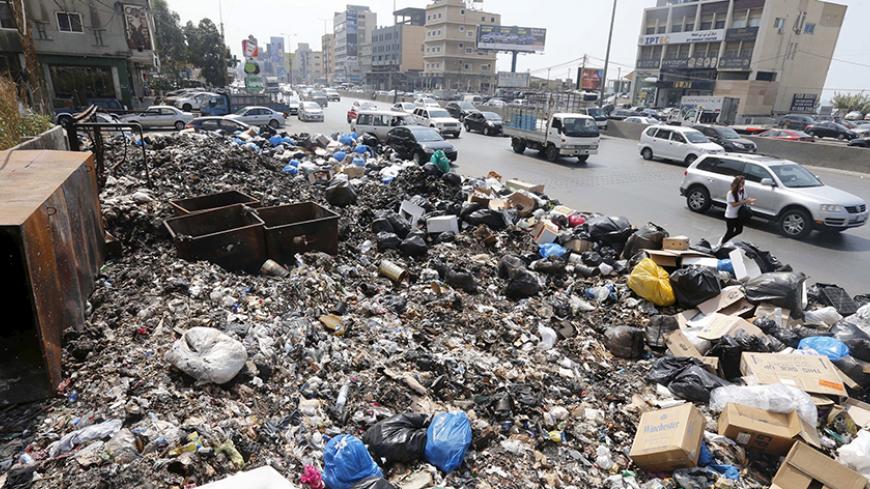 Garbage is piled along a highway after a series of protests over a trash crisis that has led to piles of garbage in the streets, as well as anger about political paralysis in Beirut, Sept. 3, 2015. - REUTERS/Mohamed Azakir

The pictures of floating garbage after rain fell on Beirut Oct. 25 are indicative of the situation plaguing this small country. The shameful images, which went viral, point to Lebanon literally being a failed state. The Lebanese government — or what's left of it in light of the presidential vacuum ongoing since May 2014 and the parliamentary paralysis making it impossible to elect the president or enact new laws — is also unable to perform the most basic of municipal tasks: clearing roads of garbage.

Is this the paralysis that on Oct. 16 prompted Interior Minister Nouhad Machnouk to threaten to have his team resign from the government? Machnouk probably prefers not to bear false witness or be turned into a scapegoat following numerous protests against the prime minister, environment minister and himself, all affiliated with the Future Movement. Garbage has been piling up on the streets since August.

Under popular pressure, on Sept. 11 the government had unanimously adopted a comprehensive waste treatment plan, according to which municipalities would be responsible for managing local waste. The government has failed to implement the plan, however, because of the sharp political divides among its components, which show no desire to make concessions in their refusal to establish landfills in their regions and share responsibility for collective waste. This is all the while knowing that the landfills are essential to the plan agreed to.

The point of contention is the location and distribution of the landfills among the provinces, a problem that at this point has taken on a sectarian character, like the overall power structure in the country. Although Lebanon's various regions are home to a mix of sects, they are still characterized by sectarian division. The solution on the table suggests distributing waste on a regional basis, but this by nature also means on a sectarian basis. Thus, talk of Shiite, Sunni and Christian landfills has emerged.

No sect has shown a willingness to receive waste from other areas or sects in its region. No political party, which essentially represent religious groups in the Council of Ministers, is willing to allow into its constituency the waste of other regions or religious groups.

The waste problem from Christian areas, particularly Mount Lebanon (the Metn and Keserwan districts), stems from the old landfills being full and no possibility of creating new ones. Establishing landfills in mountainous areas is tricky given the threat posed to groundwater.

The government plan does not include waste treatment landfills for the Metn and Keserwan​ areas, leaving Christian political forces to deal with their own waste and distribute it among their regions. This drew the ire of Christian forces, who then raised the issue of the air pollution caused by the electricity plant at Zouk (in Keserwan) in a bid to exert pressure or use the situation as a bartering tool. According to the Christian Free Patriotic Movement and the Kataeb, Christians are bearing the burden of this pollution in their areas, while all the regions and sects of the country partake in the energy supplied by the Zouk plant.

Until now, Lebanon's sectarianism had never sunk so low as to include waste. One is left to wonder whether the current crisis is actually about waste or if it is a sectarian conflict fueled by other factors.

Administrative Development Minister Nabil de Freij, affiliated with the Future Movement, told Al-Monitor, “I do not believe that the problem is about waste. This issue could have been settled from the very beginning. When the government approved waste treatment tenders, the winners were private companies, so why were the tenders canceled [by the Cabinet] in such a drastic way?”

A day after the opening of the envelopes and the official announcement of the results by Environment Minister Mohammed Machnouk, on Aug. 25 parliament Speaker Nabih Berri and Druze leader Walid Jumblatt denounced the tenders for their high cost to public finance.

“From the very beginning, there has been a desire to disrupt the government’s work, thwart the presidential elections and disrupt the political and constitutional life,” Freij asserted. When asked whether the disruption would prompt Prime Minister Tammam Salam to resign, Freij replied, “He probably should have resigned three months ago.” He then noted the constitutional requirement that the prime minister has to submit his resignation to the president. “Would it [even] be possible for Salam to resign if he wanted to? To whom would he submit his resignation when there is no president?” Freij asked.

Thus, a bigger struggle underlies the current waste crisis. Sectarian conflict and the waste crisis are pieces of the regional proxy conflict between Iran and Saudi Arabia. Lebanon's governing institutions remain in a state of dysfunction pending Iranian-Saudi discussions and agreement on a way forward. In the meantime, waste continues to pile up in the streets of Lebanon, a failed state.