The Lebanese popular movement to fight corruption in the political class has faced a number of setbacks. 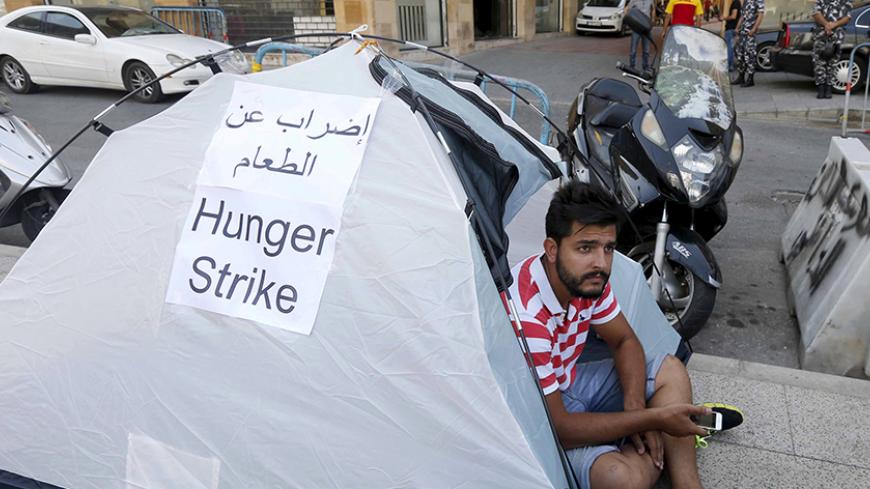 Activist Waref Suleiman rests in his tent during a hunger strike calling on Environment Minister Mohammed Machnouk to resign over Lebanon's trash-disposal crisis, in front of the Environment Ministry in downtown Beirut, Sept. 3, 2015. - REUTERS/Mohamed Azakir

In an act of desperation, young Mohamed Haraz set himself on fire before the Lebanese military court Oct. 16 in protest of the decision to keep activists Waref Suleiman and Pierre al-Hashash under arrest.

The two activists were accused of inciting people to riot during an Oct. 8 demonstration. The protest was one of a series of other popular protests in the streets of Beirut since August 2015, sparked by the garbage crisis, government paralysis and rampant corruption at all levels in the state.

The people’s anger exploded toward the entire political class, with no exception. The "You Stink" movement began in August 2015, its name a reference both to the piles of trash bags lying in the street and the widespread corruption in Lebanon.

To preempt attempts by the political parties to hijack the movement or sway it by pressuring the organizers to share the leadership role with youth organizations affiliated with political parties, the protesters rushed to raise the slogan “All means all,” so as to convey the message that the people’s anger at the political class does not exclude anyone.

The pertinent question today is: Will the movement be able to save Lebanon from the paralysis and disruption plaguing its institutions because of the deep political rifts? Some say the movement reached its peak on Aug. 29 in terms of wide participation, when thousands took to the streets in protest of a corrupt and ineffective government, only to go downhill as the number of protesters began to dwindle in response to the acts of violence that discredited the movement’s peaceful approach.

In fact, this civil movement is unlike anything Lebanon has known in four decades. Over the past years, all demonstrations that have taken place were held under political banners and for named, specific goals. They have rarely touched on the citizens’ economic and social concerns, such as the need for clean roads, reliable electricity and job opportunities, among other demands.

Before, any popular mobilization was subject to sectarian considerations, even when raising national slogans. Demonstrations held by the March 14 political camp, for instance, often had a Sunni tint, whereas those organized by the opposing March 8 camp were mostly dominated by Shiites. As for the Christian parties, they have been divided between the two camps, but lately they have taken a somewhat sectarian turn, calling for rights for Christians, even if Christians themselves disagree on how to achieve such demands. While all of them agree on the need for a new electoral law to restore balance to parliamentary representation, they still disagree on which law would best serve the Christian sector.

None of this is surprising, as the Lebanese political system is based on sectarian quotas in the state institutions and on the distribution of powers among the different denominations. Further fueling this sense of sectarianism is the current war raging in the Arab regions, from Iraq and Syria all the way to Yemen.

However, this new movement transcends all denominations, gathering young people from different religions and sects and calling for the removal of both literal and symbolic garbage. It is true that the movement’s calls have gone beyond social demands to the overthrow of the regime, but it has remained untainted by sectarianism. The call to topple the regime merely reflects the resentment of the people who have become fed up with rampant sectarianism.

Another new slogan, "Badna nhasseb" ("We want accountability"), reflects the will of the Lebanese to hold those in charge of managing their affairs accountable. The supervisory institutions in the country have become virtually paralyzed, and the parliament has failed to elect a president and form a functioning government since May 25. On Nov. 5, 2014, the members of Lebanon’s parliament went so far as to extend their own terms in office.

While the popular movement has so far failed to change the regime, it has managed to promote a new political dynamic.

“Today, the government started to listen to us,” Lea Baroudi, a social activist who has been involved in the protests since the beginning, told Al-Monitor.

The authorities have finally broken their silence. On Sept. 16, the financial public prosecutor, Ali Ibrahim, reopened the file of politicians who are not paying their electricity bills. He ordered their power supplies cut until they pay their debts, which go back to the year 2000.

The movement’s dynamics have also affected the traditional political parties, which have found themselves rearranging their priorities in line with the public demands.

On Sept. 15, the head of the Kataeb Party, Sami Gemayel, declared the establishment of a corruption observatory. An even bigger achievement was made in the waste department, as the government handed over the waste file to Agriculture Minister Akram Chehayeb from Environment Minister Mohammed al-Machnouk, whose resignation the movement has demanded.

In September, the government put forth a comprehensive waste management plan, including steps to start decentralization at the level of the municipalities, which will be authorized to handle the waste issue by granting contracts to the private sector.

Although the plan has been rejected by several local environmental organizations such as Lebanon Eco Movement, it would not have seen the light of day had it not been for the popular pressure.

However, despite all its achievements, the movement has lost momentum and the weekly calls for protests are no longer mobilizing thousands.

“People first sympathized with the movement as it was calling for the removal of garbage from the streets, but this does not justify the acts of violence and vandalism against [property owned by] Solidere, the company that was in charge of developing Beirut's Central District [following the end of the country's civil war in 1990],” one of the leaders of the Future Movement told Al-Monitor on condition of anonymity.

There have also been tactical mistakes, Baroudi said. “We failed to capitalize on the movement’s achievements. We did not celebrate our victory when the government responded to our demands under pressure. Such a step could have showed the public that the demonstrations are fruitful,” she said. “On the contrary, the organizers of the protests dug in their heels, raised the ceiling on their demands, wearing the people out and giving an impression that the protests have become futile.”

Baroudi continued, “The main goal has become to clash with the security forces, ignoring the original demands of waste removal, water, electricity and job opportunities, among others. Yet despite all these mistakes, we ought to carry on.”

Baroudi may be right. Despite all its shortcomings, Lebanon needs this civil movement. In a country deprived of functioning institutions, the street has begun acting, though with some degree of anarchy, as an opposition force.