The demonstrations held Aug. 22 by independent Lebanese activists against the government's mishandling of waste collection management are likely to continue, as people now shift their focus to corruption in the political class. 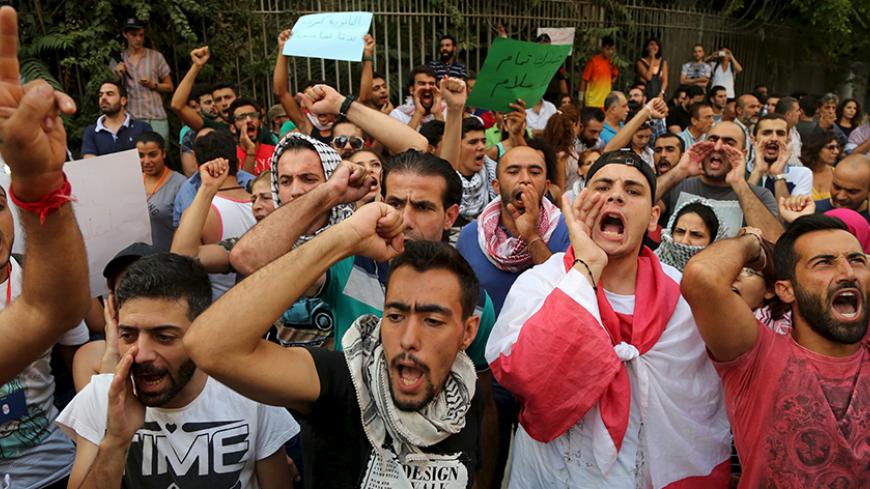 Protesters gesture and chant slogans ahead of a march towards the government building in Beirut, as part of the "You Stink" campaign aimed at highlighting corruption within the Lebanese government, Aug. 24, 2015. - REUTERS/Aziz Taher

Beirut is holding its breath as it awaits a large demonstration scheduled for Aug. 29. The protest was called by a large number of independent activists and civil society organizations against the Lebanese government's policies, especially following its failure to resolve the country's worsening waste crisis.

The crisis started on July 17, when the Lebanese government decided to close one of the largest landfills, which was run by the private company Sukleen, which was also in charge of collecting garbage in the area. The company has depended on the landfill, which is located in the coastal town of Naameh about 10 kilometers (6 miles) south of Beirut, to get rid of its waste.

Under pressure from the Naameh town residents and the surrounding villages, Lebanese Minister of the Environment Mohammad Machnouk made the decision Jan. 4 to close the landfill, scheduling its last day for July 17. The residents have been demanding the closure of the landfill since its creation over 15 years ago, arguing that environmental effects on the region and its residents have become unbearable, and threatening to take action to prevent waste trucks from dumping garbage there.

Following its decision to close the Naameh landfill, the Lebanese government launched an official tender for waste management across Lebanon and divided the country into six regions that will each be assigned a waste collection company.

However, administrative complications and bureaucratic obstacles emerged amid talks about political allocations, in addition to suspicions of corruption and ties with politicians in the government by the owners of the companies participating in the bidding. All of this led to a delay of the tender.

The deadline for the closure of the Naameh landfill on July 17 arrived, with no alternative to get rid of the waste, sparking a major national crisis. Waste piled up in the streets, leading to successive crises both at the environmental and political levels.

As the problem rapidly worsened, a group of young independent activists launched the "You Stink" campaign in July and started a series of movements in Beirut and other areas in Lebanon in an attempt to highlight corruption rampant within the Lebanese government.

The campaign escalated on Aug. 22 when a sit-in was staged in downtown Beirut in front of the Ottoman-era Grand Serail building, the headquarters of the Council of Ministers. That evening, participants in the sit-in chanted slogans condemning the Lebanese government while demonstrators and protesters called for toppling the regime, a scene various Arab capitals had witnessed during the Arab Spring.

Skirmishes erupted and the security forces that were deployed in the vicinity of the government headquarters used force in an attempt to disperse the demonstrators and end the protest. Live ammunition and rubber bullets were fired at the demonstrators, wounding about 30 people, according to officials of the Lebanese Red Cross, which treated the wounded and took them to various hospitals in the capital. At least one person was seriously injured — a young man named Mohammed Kassir was wounded in the head; his condition remains grave.

On Aug. 23, protests escalated as the demonstrators raised their demands to include — in addition to the waste management issue — the trial of those responsible for the shooting of demonstrators and the use of force to disperse them and expel them from the center of Beirut the previous day.

The protest movement has since expanded among youth movements, civil society organizations and independent movements joining the "You Stink" campaign.

Reports have emerged about rioters infiltrating the sit-in and causing the skirmishes with the security forces.

Facing the growing popular discontent and protest movement, the Lebanese government has been trying to control the situation. Machnouk, who is affiliated with Prime Minister Tammam Salam, rushed to schedule the announcement of the tender results on Aug. 24, to award new companies the task of waste collection and management.

However, as soon as the minister announced the names of the six companies, civil society movements rejected the decision, arguing that corruption is at play and that the winning companies had links to politicians. The protests in central Beirut resumed on Aug. 24, and once again, security forces resorted to violence in dealing with protesters, with media outlets reporting at night that roughly 400 demonstrators had sustained injuries.

On Aug. 25, the Lebanese government made a second attempt to contain the escalating situation; Salam called for an extraordinary Cabinet meeting in the morning, and announced the cancellation of the tender results. However, the government failed again to calm protesters as civil society organizations rushed to reject governmental action and scheduled another demonstration in downtown Beirut on Aug. 29. According to the protest's organizers major preparations are underway and the demonstration will be the biggest so far.

According to the "You Stink" campaign, the demonstration will call for the resignation of the government. In addition to the fear of a recurrence of clashes between demonstrators and security forces, the country currently being without a president could complicate matters further. As the resignation of the current government could lead to a constitutional vacuum within the Lebanese institutions, the Lebanese anxiously await Saturday's developments.