Has the Islamic State returned to Lebanon?

Details of the twin explosions that hit Beirut’s southern suburb — Hezbollah’s stronghold — still need to be revealed, while the Islamic State has already claimed responsibility for it. 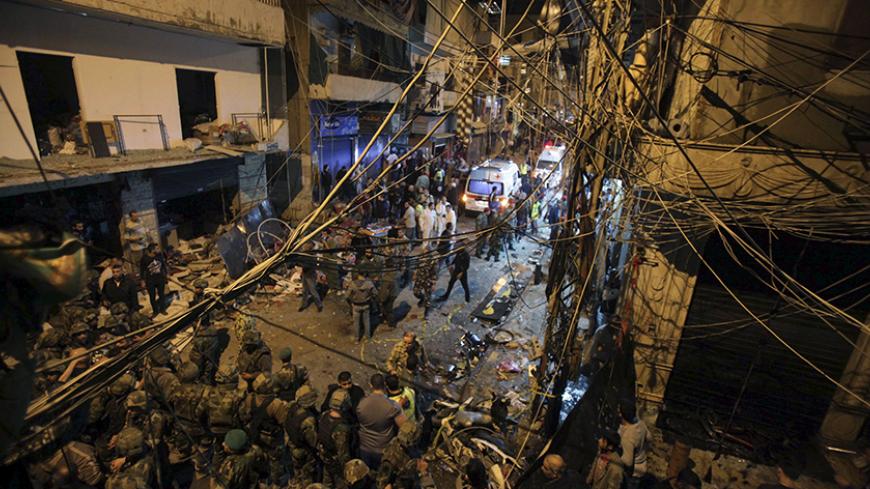 The similarity of separate attacks in Lebanon recently could be a signal that the Islamic State (IS) is planning a series of suicide bombings there, possibly to pressure Hezbollah to pull its forces out of Syria.

People are mourning in Burj el-Barajneh, a southern Beirut suburb hit Nov. 12 by twin explosions that killed at least 43 people and wounded more than 200. Most of the victims were residents of the busy neighborhood on the edge of Beirut’s international airport.

“[It was] only a few minutes between the first explosion and the second [explosion],” said Ali Husseini, a local who witnessed the aftermath of the attack. Husseini, a teacher, explained the timeline of the tragedy to Al-Monitor. “We first heard an explosion and rushed to the main street to see what happened. As I ran through the alleyways, another explosion rocked the place. It was clear to me that I was heading into carnage.”

Claims that three or four suicide bombers had been involved in the attack circulated among people on the scene. Some rumors, however, were quickly discredited. An image was widely shared via mobile message that claimed to show one of the attackers, but an online search by Al-Monitor confirmed it was an image from July of this year, from Taif, Saudi Arabia. Several media reports suggested the evening of the attack that Lebanese security forces arrested one of the suicide bombers, yet these reports were later refuted. The only person who appeared on TV channels as an alleged would-be bomber turned out to be a passerby from the area who was deemed suspicious by security personnel. Some outlets even named him and claimed he was from Tripoli, north Lebanon.

A Lebanese security source, speaking to Al-Monitor on condition of anonymity, claimed that “most probably there was only one suicide bomber. He parked the booby-trapped motorcycle, detonated it, then tried to find his way toward the mosque where a religious ceremony was being held, but he was obstructed.”

The suicide bomber was stopped by Adel Tormos, a 34-year-old man who sacrificed his life to save tens of lives in the nearby mosque. Tormos, a father of two, died as he tried to prevent the suicide bomber from entering the mosque. “He was wearing two [explosives], a bigger one on his chest that he failed to detonate and a small one on his waist,” said the Lebanese security source, who added, “We don’t have till this moment any proof that there was another suicide bomber.”

IS claimed responsibility and issued a statement a few hours after the attacks: “Soldiers of the caliphate succeeded in detonating a motorcycle in the middle of a Shiite gathering.” It continued, “After the apostates gathered at the scene of the explosion, one of our knights detonated his explosive belt, killing more than 40 and injuring more than 200.”

On Nov. 6, an attack in Arsal in eastern Lebanon targeted a gathering for the “Qalamoun Muslim scholars committee,” killing five and injuring more than 10. That explosion also was carried out using a booby-trapped motorcycle.

The similarity of those attacks could indicate IS is starting a series of bombings aimed at shaking the fragile stability in Lebanon. Such attacks would be difficult to prevent given the number of motorcycles in Lebanon and their mobility.

On Nov. 11, Lebanese security forces arrested Mohammed Ibrahim al-Hujeiri, aka Kahroub, who, according to Lebanese media reports, was trained by IS and is responsible for booby-trapping several cars that entered Lebanon.

The security source Al-Monitor spoke to suggested the Nov. 12 attacker might have been a member of Kahroub’s cell who decided to carry out the suicide bombing because he thought his identity had been revealed after Kahroub’s arrest.

The situation in Syria appears to be having a big impact on security in Lebanon. Radical groups fighting in Syria such as IS and Jabhat al-Nusra have launched several attacks on Lebanese targets during the past two years, killing dozens in different areas. These groups claim to be responding to Hezbollah’s involvement in Syria, though their victims appear to be mainly civilians.

IS might be pressuring Hezbollah to withdraw forces from the Syrian territories, believing Hezbollah has been essential in keeping Syrian President Bashar al-Assad in power for the past three years.

In the past few days, Hezbollah and the Syrian army have been able to break the more than two-year-long siege imposed on Kuweires military airport in Aleppo, according to Hezbollah’s media outlets.

The Nov. 12 bombing was the first in Beirut's southern suburbs since June 2014, when a suicide bomber detonated his car between a crowded cafe and an army checkpoint, killing a Lebanese security guard who prevented the suicide bomber from crossing toward a crowded area.

by Murielle KASPRZAK and Joseph SCHMID | AFP | May 26, 2022
END_OF_DOCUMENT_TOKEN_TO_BE_REPLACED