In the Oslo process, the issue of Jerusalem was purposefully delayed to be the last negotiated one; but in the next peace process it could be wise to begin negotiations by tackling Jerusalem's status first. 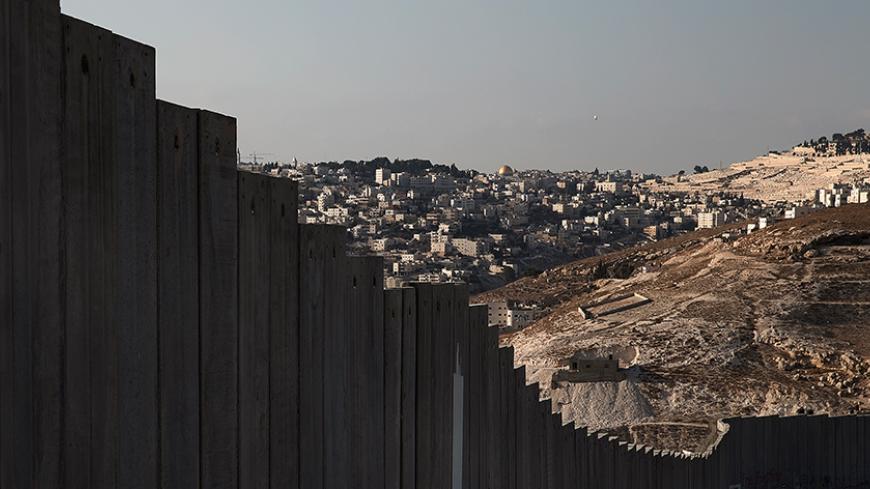 The golden Dome of the Rock (C) in Jerusalem's Old City is seen in the distance beyond a section of the controversial Israeli barrier in the West Bank city of Abu Dis, Oct. 29, 2014. - REUTERS/Finbarr O'Reilly

There is no doubt that among all permanent status issues to be resolved regarding the future between Israel and Palestine, the most difficult one by very far is the status of Jerusalem. Emotionally, it is the most loaded issue; politically, it is the most complicated one. From a religious perspective, reaching an agreement between the Jewish and Muslim worlds on the Jerusalem issue seems like "mission impossible."

But pragmatically, this should not be the case. Analyzing today's situation, one can say that Jerusalem is already de facto a divided city, between west and east. Most Arab neighborhoods, such as Jabel Mukaber, Issawiya, Shuafat and Atur, are now cut off by road blocks and the Temple Mount (Haram al-Sharif) is administered by the Jordanian Waqf in coordination with the Palestinian Authority's Ministry of Waqf and Religious Affairs; only Muslims are allowed to pray there. It is also an open secret that PA officials are active both socially and economically in East Jerusalem.

The majority of Israeli public opinion supports giving up control over the East Jerusalem's Palestinian neighborhoods. According to a poll conducted on Oct. 27 by Mina Tzemach for the Israeli Knesset channel, 50% supports transferring the Arab East Jerusalem neighborhoods to the PA, while 41% oppose it. These results stem from developments on the ground, namely those borne out of the conflict, and not following any negotiations. Nevertheless, they show the road to a resolution of the contentious Jerusalem issue; they could actually serve as the basis to such a resolution.

If negotiations are one day resumed, what remains is to turn this de facto situation into a de jure division between two states and to deal with the future arrangements for the Old City and the holy sites. Jerusalem would become Israel's internationally recognized capital, also by all Arab states. (Today, no government recognizes it; not even the US administration.) East Jerusalem would become the internationally recognized Palestinian capital. The Palestinian government offices could be located in one of the Palestinian neighborhoods inside East Jerusalem.

As for the holy sites, all Jewish sites would come under Israeli sovereignty and all Muslim sites under Palestinian sovereignty.

The Old City should be divided according to the division of the city itself: the Jewish Quarter to Israel and the other quarters to Palestine. Given the historical importance and sensitivities of the Old City, no army or regular police force should be allowed to enter. Both sides should each establish special municipal police forces for public order, overseeing the freedom of worship at the respective religious sites.

This will lead to a situation in which there will be two capitals, actually two Jerusalems: the Israeli Jerusalem (Yerushalayim) and the Palestinian Jerusalem (Al-Quds), which will be each forced to develop infrastructure and economic cooperation. The road to such a resolution is very difficult, even with political will — which is currently nonexistent. Yet, given today's status quo, it is not a long road. Rather, it is a road that needs very courageous decision-making on both sides, with the help of the international community.

When asked about such propositions, a senior and pragmatic Fatah official who talked to Al-Monitor on condition of anonymity rejected it out of hand. He said, "Jerusalem is to us — the Palestinians, the Arab countries and the Muslim world — not less important than to Israel and the Jewish world. East Jerusalem is occupied and should be returned. We insist that all symbols of Palestinian sovereignty will be present on Haram al-Sharif — a Palestinian police force and a Palestinian flag — and it should be administered by the Palestinian national government. Israel can do the same for the Wailing Wall."

He added emphatically that the Palestinian president's office (Muqata, today located in Ramallah) must be relocated to the Old City and suggested Orient House as a suitable location. He acknowledged, however, that after the division of Jerusalem, Palestine could recognize West Jerusalem as Israel's capital.

An Israeli confidant of Prime Minister Benjamin Netanyahu was even more adamant in rejecting a pragmatic compromise formula. He told Al-Monitor on condition of anonymity, "Jerusalem will remain united as Israel's capital, with the existing special arrangements on the Temple Mount for the Jordanian Waqf." He said that once all other issues are resolved, primarily Israeli security in the face of Arab terror, Israel might show certain flexibility on some of the East Jerusalem Palestinian neighborhoods.

Indeed, such a pragmatic solution of turning the de facto situation on the ground into the basis for a legally binding framework is impossible today. As aforementioned, it would require political will and tremendous civil courage on both sides. It would also demand intensive US diplomatic intervention that, today, is not realistic.

Yet, as the diplomatic stalemate can only lead to further violent deterioration, including in Jerusalem, it might be time to reflect on innovative approaches to conflict resolution. If in the Oslo process Jerusalem was purposefully delayed to be the last negotiated issue, in the next peace process — which sooner or later will be born out of necessity — it could be wise to begin negotiations by tackling the Jerusalem issue first. Leaving it open is a dangerous time bomb. A gradual resolution of the Jerusalem issue will facilitate the resolution of the other issues — borders, settlements, security and refugees. Indeed, it might be time for another Oslo secret back channel; this time with "Jerusalem first" instead of "Jerusalem last."