Israel makes it official: Another wall on the way

Palestinians are interested to see what kind of wall Israel will build along the Gaza border to discourage Hamas attacks. 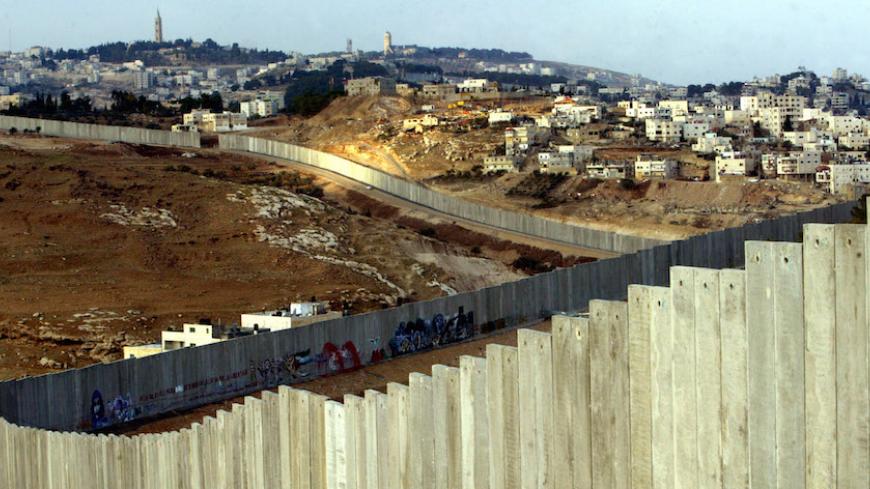 Israel officially declared it will build a long-promised security wall on the Gaza border to stop Palestinians from entering through tunnels. The Nov. 12 announcement by Israeli Defense Minister Moshe Ya’alon was short on details, leaving room for a lot of speculation. It did not specify whether the wall will consist of a land barrier parallel to the border fence encircling the Gaza Strip, a deep ditch along the border fence or a cement wall at the base of the fence like the West Bank wall.

Al-Monitor attended a workshop held Nov. 18 by the Palestinian Institute for Strategic Studies in Gaza. Prominent Palestinian academics and political, economic and security analysts participated in the gathering, which focused on the Israeli wall issue. The participants excluded the possibility that Israel Defense Forces will build a cement or iron wall that extends underground to prevent the construction of tunnels, since the budget allocated to the IDF is not likely to allow such an option. Workshop participants estimated such a project would require about $2 billion.

Participants said Israel is likely to copy Egypt's measures of destroying the tunnels by digging a large tunnel parallel to the Gaza border and pumping water into it. Another possibility was also discussed: Israel could build an underground barrier on the border and equip the border fence with surveillance cameras.

Israelis near the Gazan border have been calling for a plan to protect them from armed Gazans for more than a year, and have demanded that the government equip the borders with devices to detect the digging of tunnels. The IDF also is seeking ways to keep recent Palestinian attacks in the West Bank from expanding. Sporadic confrontations have erupted between Palestinian demonstrators and the IDF along the Gaza border since the West Bank uprising started in October.

"Hamas is keeping all its options open to confront this Israeli step, but is calling upon the international community to assume its responsibility for these Israeli violations,” he said.

Since the Israeli war on Gaza ended in August 2014, the border has never been entirely calm. But the situation never turned into a full-blown military confrontation, as both parties seem to want to avoid such a scenario.

Tension has escalated, however, as Palestinians have been crossing the border looking for income.

Some tension began building in May, when Izz ad-Din al-Qassam Brigades, Hamas’ military wing, conducted some field activities, mainly opening a road on May 20 along the eastern border of Gaza. This road, which the brigades named “Jakar Street,” stretches from the Rafah crossing in the south to Beit Hanoun in the north.

Then on Aug. 12, Israel accused Hamas of digging tunnels that reach the settlements at the Gaza border. Israel claims Hamas intends to use the tunnels in a new military confrontation.

Mahmoud Mardawi, a released prisoner from the West Bank exiled to Gaza, was held in Israeli prisons for 20 years for participating in military operations against Israel in the 1990s.

Mardawi told Al-Monitor, “Israel’s decision to build a wall along the Gaza border means that it can no longer allocate soldiers to preserve the security of Israelis near the Gaza border. Israel had to meet the increasing pressure from these citizens, who are concerned about the Palestinian tunnels under their houses, since these tunnels were a nightmare during the Gaza war in 2014. This wall may represent a military response to confront the Palestinians in the next war.”

The wall could add to the crisis Hamas faces in the tightening of the siege imposed by Israel, Egypt and the Palestinian Authority, blocking the weapons supply through the tunnels between Gaza and the Sinai Peninsula. Egypt almost completely closed the tunnels between Sinai and Gaza in July 2013 and, in recent months, has pumped water into the tunnels.

Following the Israeli announcement and the subsequent Palestinian condemnation, several major explosions were heard on the eastern border south of Gaza City the morning of Nov. 24. The explosions were part of Israeli military activities in the area, where the IDF was bombing tunnels on the eastern Gaza border.

A Hamas military official told Al-Monitor on condition of anonymity, “Palestinians have the means to counter any Israeli military measures on the Gaza border. We have a long experience in previous measures that were taken in the three wars of 2008, 2013 and 2014. The resistance confirms that it has the necessary experience and capacities to thwart any Israeli field move, yet the nature of the means it would resort to cannot be revealed, given security sensitivities.”

Hamas believes an Israeli wall on the Gaza border will not achieve security for Israel, just as the Israeli West Bank wall has not protected settlers there. But Israel probably fears potential security problems in Gaza such as the eruption of a new war with Hamas, Palestinian factions preparing for such a war and kidnapping operations targeting Israeli citizens and soldiers along the border. It seems Israel is racing time to prevent the danger from Gaza from exploding in its face.