After Paris, Iran spy chief warns Tehran could be next

Iranian officials have warned about the possibility of an attack by the Islamic State. 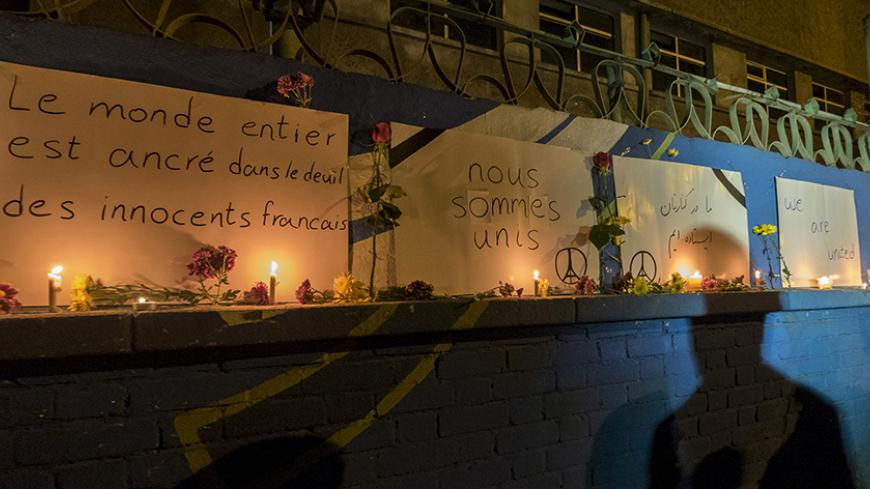 A shadow is cast on a wall as flowers and candles are seen in front of placards in tribute to the victims of Paris attacks, outside the French Embassy in Tehran, Nov. 14, 2015. - REUTERS/Raheb Homavandi
Arash Karami
@@thekarami
November 16, 2015

After the series of attacks Nov. 13 that killed at least 129 people in France, Iranian Minister of Intelligence Mahmoud Alavi is warning that the Islamic State could have its sights set on Iran.

At a Nov. 15 security conference in Tehran, Alavi warned that one of the most dangerous threats to Iran comes from the same terrorist group that attacked Beirut and Paris. While Alavi said Iran has taken the necessary precautions, he added, “The recent bombings are a serious warning to us that needs the consideration of specialists.”

Alavi did not say whether the potential threat emanates from inside Iran or from groups in neighboring countries.

Gen. Ahmad Reza Pourdestan, commanding officer of the Iranian army's ground forces, spoke Nov. 16 of concerns about having IS on Iran's western and eastern borders. He said attacks on Diyala province in Iraq, on Iran’s eastern border, led to the decision that if IS forces reach within 25 miles of Iran’s borders, its military will take action.

Pourdestan said that in northern Afghanistan, Taliban and IS forces have joined together to “invade Iran,” but he added that IS forces are currently unable to do so.

Iran has forces in Syria and Iraq, fighting both IS militants and armed groups that oppose the Syrian government. Iran says its soldiers are “advisers,” but dozens of Iranians have died since large-scale operations began in September. Pourdestan said these soldiers are from the Iran Revolutionary Guard Corps' Quds Force but if necessary, the Iranian army is also prepared to send in soldiers.

Though Pourdestan speaks of a military campaign, the threat of IS attacking Iran from within is certainly possible. According to Iraqi Foreign Minister Ibrahim al-Jaafari, Iraq had warned France, the United States and Iran that IS had plans to attack inside their countries.

Iran has made a number of arrests that authorities claimed were related to IS. In June 2014, Iran’s Intelligence Ministry arrested 30 individuals it claimed were members of IS. In September, Turkish officials said three Iranians who had traveled to Turkey with the intention of joining IS in Syria were arrested.

Iranian President Hassan Rouhani offered his condolences to France for the terror attacks. Hard-line Iranian officials and media have blamed Western policies in Iraq and Syria for the creation of IS. The head of Iran’s judiciary, Ayatollah Sadegh Larijani, said Nov. 16 that US officials whose policies helped create IS should be tried. Hussein Amir-Abdollahian, deputy foreign minister for Arab and African affairs, said Nov. 16 that Iran had warned regional and Western countries that by supporting unrest in Syria, the "unrest would infect their own countries as well."

Some of the most shocking media coverage after the Paris attack came from the hard-line Persian-language daily Vatan-e Emrooz. The newspaper's front page showed a body on a Paris street, covered in a white sheet, with the headline, “Here you are, Shaam.” "Shaam,” a reference to Syria, also means "dinner" in Persian. The headline is from a popular show in Iran, “Here you are, dinner.” The subheadline, alluding to French support for fighters opposed to the Syrian government, read, “The West finally tasted its cooking in Syria.”