Will Washington put more boots on the ground in Iraq?

The recent operation in Hawija led by the United States to release Islamic State hostages raised a debate in Iraq about the government’s powers and sovereignty over its territory. 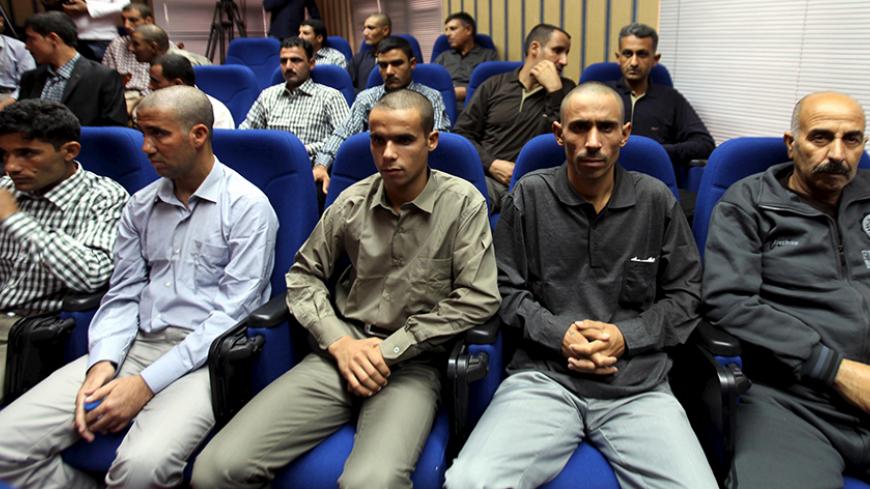 Hostages who have been freed by peshmerga special forces and US forces listen to Iraqi Kurdish Regional President Massoud Barzani in Erbil, north of Baghdad, Oct. 27, 2015. - REUTERS/Azad lashkari

The Oct. 22 raid by US and Iraqi forces to release hostages of the Islamic State (IS) seemed to represent a qualitative leap in military cooperation between the countries. However, the raid provoked controversy over whether the United States informed the proper Iraqi officials ahead of time — and how the answer could affect Iraq's sovereignty.

Although a US soldier was killed and three peshmerga fighters injured, the operation was a success as 69 hostages held by IS since August 2014 were released, 20 IS members were killed and another six were detained. The peshmerga is the military force of the autonomous region of Iraqi Kurdistan.

Iraqi parliament speaker Salim al-Jubouri described the operation in an Oct. 25 statement as a “qualitative operation conducted by Iraqi forces consisting of peshmerga and army members, and backed by US forces, to free the hostages in the Hawija district.” The operation was the first of its kind since all US troops withdrew from Iraq in 2011. Its importance resides in the fact that it included ground combat operations by the US troops and not just remote military advisers.

Iraqi political opinion on the street was divided regarding US ground operations in Hawija. Two days after the Oct. 22 raid, the largest Arab Sunni parliamentary bloc in Iraq, the Union of Nationalist Forces, welcomed the news and expressed gratitude to the US and peshmerga forces.

Kurdistan Regional Government Prime Minister Nechirvan Barzani also praised the operation, which he described as courageous, and he expressed his thanks for the US military, political and diplomatic support in the war against IS.

In contrast, political groups such as the League of the Righteous condemned the operation and described it as “a violation to national sovereignty and a new conspiracy, as it occurred without the Iraqi government’s knowledge, while the Kurdistan government was [previously] informed about it.”

In response to the criticism, US Army Col. Steve Warren, spokesman for the combined joint task force, said Oct. 24, “The Iraqi government was informed of this operation. This operation was urgent. We knew the hostages would soon be murdered. One American, who was there as an adviser, was killed during the mission. There has been no change in our policy. We are not conducting combat operations in Iraq. We conducted this operation in our advise-and-assist capacity.”

The differences over this issue led to a sharp division in Iraqi political circles. The parliament's Security and Defense Committee demanded Oct. 25 that Iraqi Prime Minister Haider al-Abadi explain whether he was informed in advance about the operation and whether there was official coordination with the Iraqi government to identify the people to be freed. The committee also asked for an explanation about what happened to the IS prisoners who fell into the hands of US troops and if they are still being held captive.

On Oct. 26, MP Mowaffak al-Rubaie, who served as national security adviser in Iraq from 2004 to 2009, confirmed that parliament will be discussing the Hawija incident and will demand that the government provide an official position in this regard.

On Oct. 29, former Iraqi Prime Minister Nouri al-Maliki expressed his concern about the violation. He said he spoke about it with Stuart Jones, the US ambassador to Iraq.

“It is important to respect the country’s sovereignty," Maliki said, "and if the raid took place without the knowledge, demand and supervision of the Iraqi government, then it shall be considered a violation."

However, he added, the ambassador claimed that the Iraqi government knew in advance about the raid, so for the United States it was not a violation of sovereignty but an intervention under the patronage of the government.

Adding to the controversy was US Secretary of Defense Ashton Carter's statement the day after the Oct. 22 raid that the Hawija joint operation would not be the last. “We will do more raids” similar to the one in Hawija, Carter said in a press conference at the Pentagon.

One week later, on Oct. 30, the White House said US President Barack Obama ordered US special forces to assist in the fight against IS in Syria and to deploy to Erbil in northern Iraq — moves that seem similar to the one in Hawija.

Obama previously had strongly opposed calls for US troops to engage in ground combat operations in Iraq and Syria. White House Press Secretary Josh Earnest said during an Oct. 30 press conference that Obama still opposes any boots-on-the-ground military intervention to impose a political change in Syria and that the US administration will not make the same mistake the former US administration made in Iraq.

But has the United States changed its policy in the war against IS, particularly since Russia joined the scene in Syria and since some Iraqis want Russia to expand its airstrikes against IS to Iraq? It has been widely reported that Shiite factions and the ruling State of Law Coalition have asked Abadi to seek Russia's help against IS in Iraq.

Between those opposing and those supporting the qualitative change in the US policy, the US and Iraqi parties need to take into consideration several sensitive issues.

Second, carrying out joint operations with a special force in any region of Iraq would strengthen the separatist trend in the country and serve neither Iraq's interests at present nor its challenges in the fight against IS.

Third, such operations should be announced by the Iraqi government, considering it is the party that enjoys sovereignty and authority on all its territory. Such action could avoid objections and further political divide in the country.

There is no doubt that Iraq is in dire need of intensified support and backup by the United States, as a strategic ally in the fight against IS. Yet the regulation and coordination of such support should be carefully studied to avoid negative consequences.