As a former ISIS stronghold, Hawija feels rejected and neglected both nationally and internationally. 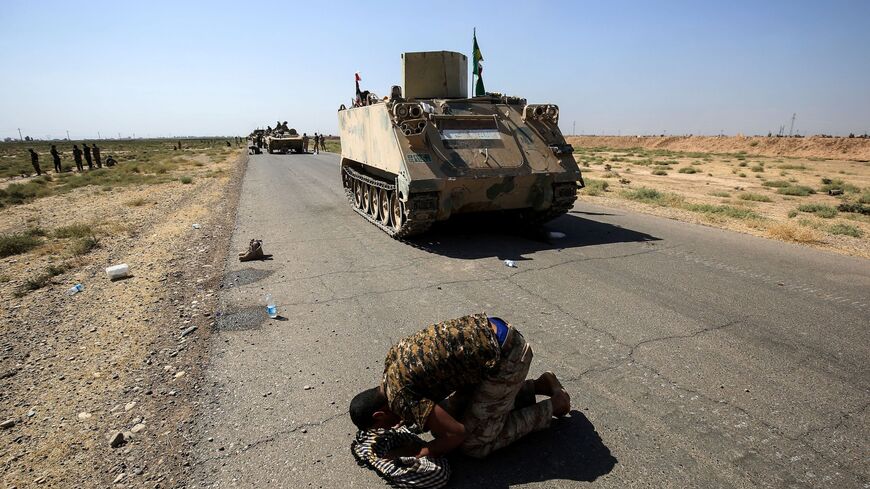 A paramilitary fighter prays on the road next to an infantry-fighting vehicle during the advance towards villages between the northern Iraqi cities of Hawija and Kirkuk on Oct.r 6, 2017, after the Iraqi forces retook Hawija from Islamic State (IS). - AHMAD AL-RUBAYE/AFP via Getty Images

Six years after a Dutch air raid as part of the coalition against the Islamic State, the scars of the disaster are still everywhere in the Iraqi city of Hawija. The target was an explosives factory, but at least two tankers outside the factory were full of explosives, and tons of chemicals used to make bombs were stored nearby. At least 70 people were killed and hundreds wounded. Part of the industrial area where the factory stood is still just ruins.

The inhabitants of Hawija knew that Dutch planes were responsible for the disaster that befell their city in June 2015 long before it was revealed in the Dutch media. “We knew right after it happened, from leaks from the operation”, mayor Sabhan Khalaf Ali al-Jubouri explained. “Why is the Dutch government saying it did not know? Someone is trying to escape responsibility.”

Al-Jubouri is on a trip to The Hague to make these complaints in person. Last year, the Dutch Ministry of Defense finally earmarked 4 million euros for Hawija, years after the former minister Jeanine Hennis Plasschaert (now head of the UN mission in Iraq, Unami) was forced to step down for misleading Parliament. It has recently become clear that officials knew at the time of the bombing that the collateral damage could be serious. Al-Jabouri has called on the Dutch both to issue an official apology and to provide immediate assistance in Hawija. “My people expect me to return with compensation money,” he said.

“We had a supermarket, which was totally flattened,” said Hani al-Obaidi, a soldier at a military base just outside the town. “Daesh offered us $200 in compensation, which I refused. The Iraqi government has not compensated me.” He squarely blames the Dutch for his loss, as does the owner of a small shop selling motor oil in the industrial area, who only managed to rebuild with the help of his supplier. They are both angry that no compensation has been paid as yet by the Dutch government.

People in Hawija point out that France has rebuilt the technical institute its air raids destroyed during the IS occupation. And that the eastern province of Ramadi, which suffered enormous destruction, has already been largely rebuilt with help from coalition countries.

“We have not seen any money from Holland,” says Sheikh Wasfi al-Assi angrily. “None of the victims has received any compensation. Are the Dutch not interested at all in their fate?”

The sheikh receives his guests at an army base right outside the town—one of many, to counter the IS cells that still are active in the area. Shiites are the majority in Iraq and control the government as well as the army and security forces. They are not willing to forget Hawija’s role as an IS stronghold, and distrust its people still.

Hawija’s sheikhs and leaders try to explain to politicians in Baghdad that they lost 5 000 of their own people to the terror group. And civilians generally had little choice but to stay, they say. “If we tried to leave, IS killed us. If we stayed, the coalition bombed us,” people say. After the 2015 disaster, there were problems with the water and electricity supply, but IS was not engaged in any rebuilding. Hawija’s civilians were mostly peaceful, says Sheikh Al-Wasfi. “Everybody waited until Daesh had gone, as Daesh was stronger than they were.”

Yet many in Iraq still consider Hawija to be dangerous, and the recurring attacks on the checkpoints and bases manned by Shiite militias and army around the town only feed the perception. Every road into this conservative Sunni town is guarded by militias of the Shiite Hashed, and colorful Shiite flags fly at every base and checkpoint.

Since the liberation in 2017, security forces ask civilians in Hawija to report any suspicious conversation or movement — something that doesn’t happen in Mosul, which was considered the capital of IS’s so-called Caliphate. For this reason, many people in Hawija admit to feeling punished twice over, first by IS and the air raids, and now by the distrust and neglect of the outside world.

Baghdad has mainly excluded the town from its own compensation payments, which is why civilians are looking to the Dutch for the money. The fact that nothing has reached them feeds into conspiracy theories: “The money goes to officials in Kirkuk,” says the sheikh. “And even there, they only give it to the people they have a relationship with.”

On every level in Hawija, people are convinced that even if money is on the way, a lot won’t make it to them. Sabria Salah lost her husband to IS and a son to the explosion. Her house was flattened, and she now rents another, while hers is slowly rebuilt with money loaned by her family. “The NGOs don’t come to the right people,” she says. “We heard there were lists, and that mattresses and blankets were distributed, but we got nothing.”

Her brother-in-law, Harif Shabib, says the NGOs only help people they have a relationship with. “We know of a village school that has been renovated six times over, while schools in other villages are still in ruins.” He points out that his sister-in-law should at least receive his husband’s state pension. But as he is missing and has not officially been declared dead, she does not.

The Al-Ghad League for Woman and Child Care, the major local NGO in Hawija, indicates that psychological problems have snowballed due to the violence of the occupation, the explosion and its aftermath, with hopelessness leading to a recent increase in suicides. Tofan Abdulwahhab Awad of Al-Ghad said, “We call on the countries that helped us to get rid of Daesh to continue helping us now. Daesh was a terror group, but you are countries with values to uphold.”

The billboards normally used by international NGOs to show their ownership of local projects are missing in Hawija. Another problem is the misconception that victims will receive compensation in cash, when in fact NGOs usually offer non-food items and support for those who want to rebuild. The Dutch Ministry of Defense has said that the millions it has earmarked for Hawija will not be paid in individual compensation.

IOM and UNHCR, the two NGOs that will be involved in the compensation project, have not yet started cleaning the city up and bringing infrastructure and electricity back into service. But the fact that two UN organizations have been tasked by the Dutch only adds to the distrust in Hawija, given that the same Dutch minister who was responsible for the air raid is now head of the UN’s Iraq mission, Unami.