To resolve regional crises before they become even worse, Iran and its Arab neighbors must engage in dialogue based on a new paradigm for conflict resolution. 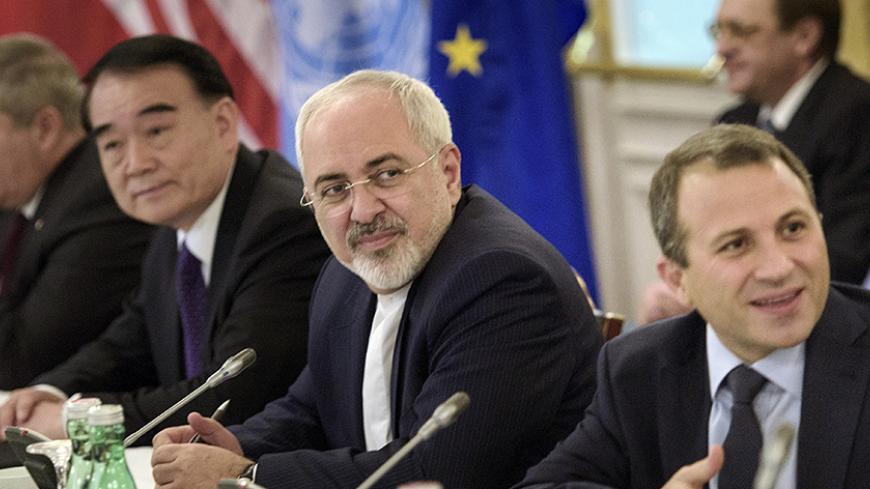 Iranian Foreign Minister Mohammad Javad Zarif (C) waits with others before a meeting with 17 nations, the European Union and United Nations in regard to Syria's four-year-old civil war, Vienna, Oct. 30, 2015. - REUTERS/Brendan Smialowski

TEHRAN, Iran — It has been five years since the Arab Spring began roiling the Middle East and North Africa. During this time, conflict pitting Saudi Arabia and Qatar against Iran and its regional allies in Syria, Lebanon and Iraq reached unprecedented levels of disaster. To deal with the situation, Iran has welcomed the idea of a dialogue with its Arab neighbors, as proposed by Qatari Emir Tamim bin Hamad Al Thani during the September UN General Assembly meeting. Indeed, during a regional tour after Iran concluded the nuclear agreement with six world powers in July, Iranian Foreign Minister Mohammad Javad Zarif made the same proposal, in addition to cooperating on counterterrorism as well as nuclear and security-related issues. Since Qatar was among the stops on Zarif's tour, Iran’s welcoming of the Qatari proposal was to be expected. Why, however, does Iran at this particular point want to engage with the other countries confronting it?

The power and economic structure of a country helps determine its priorities in foreign policy. For instance, Iran’s exclusion from the oil market directed its foreign policy toward prioritizing finding a solution to the issue of its nuclear program. Had the nuclear-related sanctions continued to tie Iran’s hands, Tehran’s regional rivals would have tried to chop them off altogether. This has been a key factor driving Iran’s priorities following the nuclear deal. The current priority for Zarif and his colleagues is to reduce regional tensions and decrease the strategic impact of troubling dynamics potentially affecting Iran. The formula for achieving these goals is simple yet complicated: dialogue and confidence building with Arab states.

The countries in the Middle East have never communicated well during times of tension. One reason is that politics in the region is very personal. That is, there is difficulty distinguishing between engagement with a government and engagement with the person who serves as head of state, king, minister or ambassador. For instance, the priorities that Saudi Arabia is pursuing in Syria are viewed as the personal wishes of the king and a reflection of him rather than the state. Thus, Iran’s opposition to these priorities is viewed as a quarrel with the office of the Saudi king, which has extended to two kings in the past five years. Engagement in such an environment is sometimes even more difficult than going to war, which is a key reason why Saudi Arabia and Iran remain diametrically opposed over the future of Syrian President Bashar al-Assad, diminishing the prospects for serious dialogue.

The prevalence of confrontation over engagement has had devastating effects for the countries in the region by producing two major consequences: the strengthening of out-of-control extremism and internationalization of the management of regional affairs. With groups like the Islamic State (IS) threatening everyone in the region, the major powers — the United States, European Union, Russia and others — bearing witness to the regional confrontations and the lack of efficient solutions, seek to play a more active role in managing the crises. The outcome is that regional countries, regardless of their intentions or desires, effectively relinquish an important share of their role to international players. Although this dynamic is to the detriment of the regional actors, at its heart, it also provides some hope that the regional actors will eventually get to the negotiating table.

Even prior to the nuclear deal, Iranian President Hassan Rouhani and Zarif had publicly cited addressing differences with neighboring countries and returning stability to the region as being among their priorities. Four themes in Iranian policy, and the roles they could play in moving forward, are important in understanding the nature of this outreach.

Acknowledging the dead end ahead

In the past, Tehran's receiving an offer to talk from a regional rival meant that its opponent’s military effort had reached a dead end. Iran understands the psychological importance of such a moment and its role on the future of a crisis. The preconditions set for resolving various regional crises have done nothing but extend and deepen disaster. Zarif and Rouhani have frequently said that no military solution is feasible in resolving regional issues and therefore seek alternative means of crisis management. In this vein, realization on the part of Iran’s rivals that the current approach only leads to a dead end could pave the way for Iran and other countries to find new solutions to their issues.

Iran appears eager to dissuade sectarian rhetoric and the narratives on which they are based to avoid escalation on the ground. Ever since religious identity became a driving force in regional politics, crises in the Middle East have become broader and more entrenched. In such an atmosphere, the Middle East’s major players have faced mounting challenges in terms of regional stability and the impact of the latter on internal security. A dialogue between Iran and Gulf Cooperation Council (GCC) states can help address and reduce rhetorical confrontations along the lines of religious identity, which, according to Iran's narrative, have been the main instrument for recruitment and fundraising for groups like IS. Therefore, an Iran-GCC dialogue could create an atmosphere effective in countering the current sectarian narrative engulfing the region’s crises.

Russia’s intervention in the Syrian war and the West’s increasing attempts to counterbalance Moscow’s involvement means that the possibility of regional countries playing a role in crisis resolution is waning. Although engaging in dialogue and more active diplomacy might not solve anything per se, it can provide regional countries with the mutual trust necessary to constructively engage on crises with more initiative and innovation.

An Arab-Iranian dialogue can create a framework for managing crises that is different from the current approach, which emphasizes the personal nature of interactions. Indeed, one of the main problems in Middle Eastern politics is the personalization of state agendas. This hampers talking, especially in times of crisis. Dialogue can reshape state priorities and override the personal dimension to the extent that confrontation over a particular issue will not bring diplomacy to a complete halt. Thus, dialogue could be the first step in successful crisis management.