It seems that Russia, through its military intervention in Syria, is complementing the Iranian-Hezbollah axis there, instead of replacing it, as Hezbollah sources confirm that coordination is ongoing between Moscow, Iran and the party. 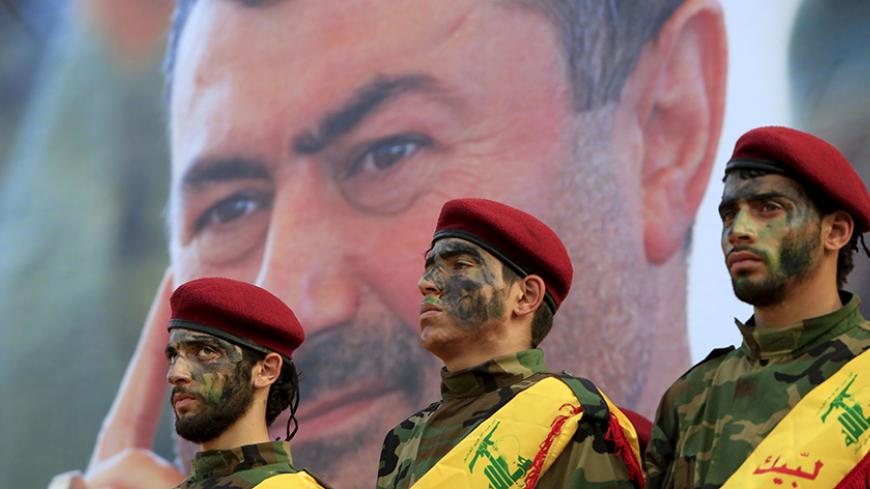 Lebanon's Hezbollah members stand at attention in front of a picture of Hassan al-Haj, one of Hezbollah's top commanders who was killed fighting alongside Syrian army forces in Idlib province, during his funeral in his hometown of al-Luwaizeh, southern Lebanon, Oct. 12, 2015. - REUTERS/Ali Hashisho

Since Hezbollah’s intervention in Syria became apparent in the summer of 2012, it has been a subject of hot debate both within Lebanon and beyond. Many questioned the wisdom of this step, saying that by engaging in the Syrian conflict, Hezbollah had tarnished its image after gaining high popularity in the Arab world as an anti-Israeli resistance force.

But with the latest twist of events sparked by the Russian intervention in Syria, which started Sept. 30, the Lebanese movement may very well be in the driver's seat to assume a major regional role. This could mean the birth of a “new Middle East,” albeit in stark contrast to the one then-Secretary of State Condoleezza Rice spoke of shortly after Israel began its war on Lebanon in July 2006 with the aim of “crushing Hezbollah.”

A major indicator supporting the above notion is that Russia does not seem to be replacing the “Iranian-Hezbollah axis” in Syria, but rather complementing and strengthening this axis. According to political commentator with Russia’s Kommersant publishing house Sergei Strokan, there now exists a “Russia, Iran, Hezbollah military triangle” in Syria.

In a telephone interview with Al-Monitor, Strokan said, “Hezbollah can do some things that Russia can’t afford to do itself,” as putting “Russian boots on the ground [in Syria] is a subject of heated debate [within Russia].”

He added, “The Russian public is worried that something similar to Afghanistan might take place.”

Hezbollah for its part appeared jubilant, from day one of the Russian airstrikes. Just hours after the first airstrikes were launched on Sept. 30, a Hezbollah official emphasized during a private discussion with Al-Monitor that Moscow "has its partners on the ground in the Syrian army and its allies, like us."

A second Hezbollah official recently told Al-Monitor about reports of the establishment of a joint operations room in Damascus for the coordination of efforts between Russia, the Syrian army, Iran and Hezbollah. The official, who spoke on condition of anonymity, underscored that the Lebanese movement — and its allies in Syria — were now receiving “support from a superpower, and Hezbollah [along with the Syrian army] was providing intelligence to Moscow in the air raids being conducted.”

An Iranian source, who maintains close contact with both the Russian and Chinese sides, went even further, saying that Hezbollah’s regional patron, Iran, had “brought the Russians [into Syria].” This scenario is further supported by reports that Russian President Vladimir Putin’s military intervention was planned out during a visit by the commander of the Iranian Quds Force, Qasem Soleimani, to Moscow in late July.

Within this same framework, the chief international correspondent of the Al Rai Kuwaiti newspaper, Elijah Magnier, has also reported about a division of labor agreement, whereby Russian warplanes provide air support for the Iranian and Hezbollah fighters on the ground (in addition to Iraqi and Afghan fighters), as they attempt to retake lost Syrian territories.

Meanwhile, director of the military and security studies program at the Washington Institute for Near East Policy, Michael Eisenstadt, as well as former head of Israeli military intelligence Amos Yadlin, have also shed light on the likelihood that the Russian intervention in Syria will only serve to strengthen the position of Hezbollah — and Iran — in that country.

At the same time, Russian experts point out that Moscow’s intervention in Syria is part of a broader strategy in the Middle East, whereby success in Syria could spell success for Putin’s bid to assume a leadership role in the Middle East, a role Putin is widely believed to aspire to.

If such a scenario is indeed playing out and the “Russian, Iranian, Hezbollah military triangle” is victorious in Syria, Hezbollah will not only go down as one of the major players that changed the geopolitics of the Middle East, but will also have established itself as a strategic partner in this “new Middle East.”

The establishment of the joint operations headquarters between Russia and Iran in Iraq to share intelligence in the fight against terror only serves to reinforce the notion that Moscow will seek to expand its regional role through coordination with Iran and Hezbollah.

According to the well-informed Iranian source who asked not to be named, Russia and China "have come to view Iran and Hezbollah [along with the Yemeni Ansar Allah group, which is viewed as the Yemeni version of Hezbollah] as the most effective fighting force against terror.”

Strokan expressed a similar view, underscoring that for Russia, “Hezbollah is getting much more important.” Expanding Russia’s leadership “obviously would require it to maintain close contact and cooperation with influential players in the region,” Strokan said, adding that “Hezbollah’s role is not restricted to Syria.”

Indeed, Hezbollah stands ready to enter into a similar arrangement with Moscow in Iraq. When asked whether the movement was ready to replicate the coordination with Russia on the Iraqi battlefield, the Hezbollah official nodded in approval.