In an Al-Monitor interview in Cairo, Ethiopian Minister for Water, Irrigation and Energy Motuma Mekasa expressed his country's determination to continue construction on the Renaissance Dam despite the lack of studies on its impact. 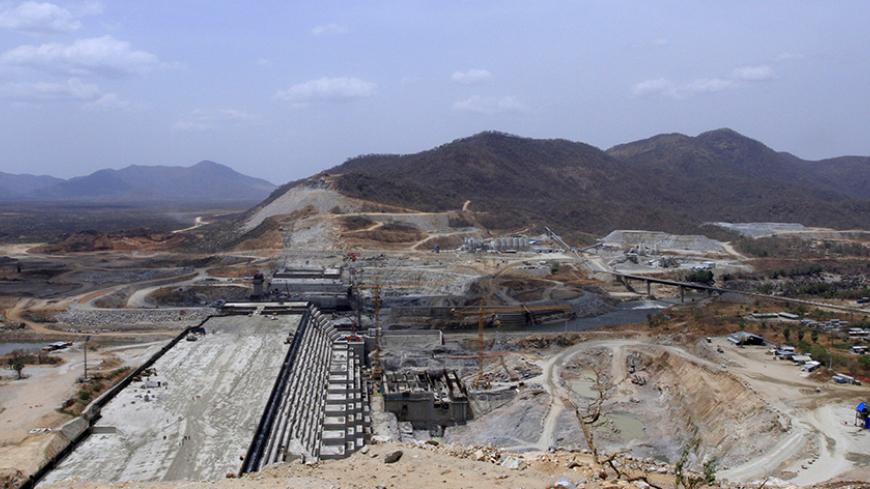 A general view of Ethiopia's Grand Renaissance Dam, as it undergoes construction, is seen during a media tour along the Nile in Benishangul Gumuz region, Guba Woreda, in Ethiopia, March 31, 2015. - REUTER/Tiksa Negeri

Cairo — A month after being appointed Ethiopian's minister of water, irrigation and energy on Oct. 6, Motuma Mekasa paid a visit to Cairo for talks with his Egyptian and Sudanese counterparts. The talks aimed at how to proceed with conducting studies to assess concerns about the repercussions of building the Grand Ethiopian Renaissance Dam on the Blue Nile, including the dam’s effect on water flow into the Aswan High Dam and environmental impacts.

“Ethiopia has provided all the political commitments needed to quickly conduct and abide by the results of studies concerning the impact of the dam without any delay,” Mekasa said in an interview with Al-Monitor on Nov. 10 in the Egyptian capital. “We shall not cease or deviate from the dam construction schedule.”

The trilateral technical discussions over the dam’s impact began in August 2014, after the release of the May 2013 report by the International Panel of Experts citing the lack of Ethiopian studies to assess the effect the dam might have on Egypt and Sudan's water security. During late 2014 and early 2015, Cairo, Khartoum and Addis Ababa agreed to approach French and Dutch consulting firms to undertake two studies, one on the socioeconomic impact of the dam and the other on the hydraulic impacts on the eastern Nile Basin.

In his interview, Mekasa also indicated that his country is experiencing reduced levels of rainfall that could potentially lead to drought and necessitate that his government adopt measures not solely reliant on the construction of dams to deal with droughts.

Al-Monitor:  What are your projections from the Cairo meeting after two days of discussions and attempts to resolve the dispute with Cairo and Addis Ababa?

Mekasa:  The primary objective for my visit to Cairo was to take part in Renaissance Dam Tripartite Technical Committee meetings and discuss proposed alternatives for the opinions of the consulting firms tasked with conducting studies pertaining to the effects of the dam, as agreed upon in the Declaration of Principles signed in March 2015 by the heads of state of Egypt, Sudan and Ethiopia. Furthermore, an agreement was reached recently to retask the French and Dutch consulting firms and discuss arrangements for cooperation in conducting the studies. Such is the technical track to which Ethiopia is committed.

Al-Monitor:  Cairo expressed reservations about the continuation of construction at the Renaissance Dam site prior to the results of the studies that are the subject of these negotiations. What is your comment in this regard?

Mekasa:  Ethiopia has provided all the political commitments needed to quickly conduct and abide by the results of studies concerning the impact of the dam without any delay. We shall not cease or deviate from the dam construction schedule.

Al-Monitor:  Without waiting for the results of the studies, are there other alternatives to implement the recommendations in the report by the International Panel of Experts on the dam in order to address Egyptian concerns and in light of the delayed resolution of the dispute concerning the arrangements for those studies?

Mekasa:  The report of the International Panel of Experts stressed the importance of conducting those studies. As a result, the Declaration of Principles was signed and two consulting firms [were] chosen to conduct the studies. Unfortunately, [the firms] were unable to reach a bilateral agreement with regard to coordinating work related to the studies. As such, we are trying to resolve those differences as quickly as possible so as not to hinder the initiation of the studies, which we will attempt to conduct once alternatives arise.

Al-Monitor:  During the negotiations that began in May 2013, did you give Cairo any guarantees to implement the yet-to-be-issued recommendations of the International Panel of Experts?

Mekasa:  We did discuss such real commitments, most important among them our signing of the Declaration of Principles with the Egyptian and Sudanese presidents and our continued participation in negotiations to conduct studies aimed at assessing the effects of the dam on Egypt and Sudan.

Al-Monitor:  Do you expect the ongoing negotiations with Egypt and Sudan to end with a tripartite agreement concerning the management and operation of the Renaissance Dam?

Mekasa:  That is my hope, and we are politically committed to attaining that goal.

Al-Monitor:  Studies currently indicate that Ethiopia might [this year] suffer from drought, as rainfall levels fell to 50% below average in some parts of the country between June and September. How will you deal with this problem, particularly considering that in 1983, similar conditions led to a famine in Ethiopia?

Mekasa:  Indeed, rainfall has sharply decreased in Ethiopia, as part of the climate change afflicting the whole world, not just Ethiopia. But the Ethiopian government is fully aware of the problem and is moving forward to exploit all means necessary in order to reduce the impact of any potential drought on the Ethiopian people.

Al-Monitor:  Will you rely on dams to store water and deal with drought conditions and the decline in rainfall?

Mekasa:  I indicated that we have a strategy to confront drought. The solution is not solely reliant on dams. Drought conditions do not occur every year, but once every decade. Furthermore, a decline in rainfall was not only recorded along the Nile Basin regions, but other areas of Ethiopia have been subjected to similar conditions in the east and north of the country.

Al-Monitor:  How will the Ethiopian government deal with other African nations to confront the possible dangers of climate change?

Mekasa:  African nations will be the hardest hit by climate change, the indications of which have already been apparent regionally throughout the continent. We realize that rainfall has declined in most areas, and we have plans to cooperate with other regional countries and international entities in order to try to avoid the dangers associated with climate change.

Al-Monitor:  On the subject of climate change, the Ethiopian government continues to be strongly focused on the production of clean energy, in keeping with international trends in that regard. What are your plans to expand electricity production, and will doing so be primarily reliant on giant dam projects like the Renaissance Dam?

Mekasa:  Our plan is to produce renewable clean energy — be it solar, Aeolian [wind] or hydroelectric, which we are very excited about. This does not exclusively mean the exploitation of Nile water resources, for there are sources of hydroelectric energy from other rivers in Ethiopia. We have many plans and projects in that regard. Though we started with the Renaissance Dam project, we cannot ignore the existence of other projects as well, for we are always on the lookout for possibilities to produce added energy. Furthermore, the Ethiopian government is currently primarily concerned with studying the exploitation of all available sources to achieve sustainable development and economic integration with regional states.

Al-Monitor:  In October 2015, the Ethiopian government announced that the Gilgel Gibe III Dam had gone online on the Omo River, despite the negative environmental and social effects that studies indicated would be the cause of conflict with Kenya, following the displacement of indigenous Kenyans in the region. What is your comment in that regard?

Mekasa:  The Gilgel Gibe III Dam has no environmental or social repercussions on the local Kenyan population. Throughout the dam construction period, we closely coordinated and discussed all issues related to the dam with the Kenyan government. We care greatly about all downstream communities, and we closely study the effects that any project might have on others.

Al-Monitor:  Ethiopia conducted lengthy negotiations with Egypt and other Nile Basin countries in order to draft the legal and institutional framework for the controversial Nile Basin Cooperative Framework Agreement, but no one now talks about the fate of that agreement. In your opinion, will work resume toward its implementation?

Mekasa:  ​We are ready to begin implementing the framework agreement, which provides for mechanisms of cooperation between all Nile Basin countries to exploit water resources and face other challenges. Without prejudice to the cooperative framework agreement, we are also ready to cooperate with any Nile Basin country under any legal or institutional framework, as evidenced by the negotiations and cooperation currently underway with Egypt and Sudan with regard to the Renaissance Dam, despite them not being signatories to said agreement.