Israelis appear to be resigned in the face of a prime minister who dismisses Palestinian despair, Knesset members' involved in corruption and major companies gouging the public with the government's assistance. 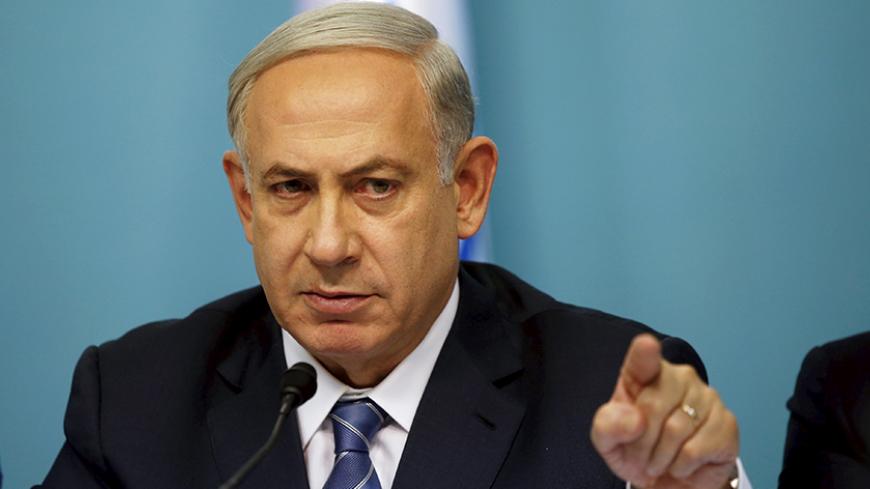 Who says it's impossible to deepen the Israeli occupation by increasing construction in the settlements and approving new outposts, all the while prattling on at the White House about establishing a Palestinian state on the very same land? Who says it's impossible to hire a consultant who has spit in the face of the president of the United States and to also obtain free, state-of-the-art weaponry from the same president? Even Democratic presidential candidate Hillary Rodham Clinton, who is not considered a big fan of Prime Minister Benjamin Netanyahu, promised that if elected, one of her first acts would be to invite him to the White House. In an article Clinton penned for the Jewish newspaper Forward and the Israeli daily Haaretz, the only victims of the occupation — a word nowhere to be found in the piece — are the citizens of Israel, who “have to look over their shoulders during everyday tasks, like carrying groceries and waiting for the bus.”

The latest Peace Index survey indicates that Israelis are reverting to their daily routines despite the current wave of violence. Most Israeli Jews, 64%, report that they have not changed their daily routines by cutting back on public transport or changing the way they shop. In addition, most Israelis do not seem to have absorbed the comments made Nov. 1 by Maj. Gen. Herzl Halevi, chief of Military Intelligence, about the link between Palestinian despair and terror attacks.

The Peace Index, conducted by the Evens Program in Mediation and Conflict Resolution at Tel Aviv University and the Israel Democracy Institute, shows that the vast majority of Israelis, 74%, rejects the contention that the current wave of terror attacks is the result of Palestinian despair over the stalemate in diplomatic negotiations. In other words, average Israelis do not blame their leadership and its policies for the absence of peace or the undermining of their personal safety. The major opposition parties, the Zionist Camp and Yesh Atid, have offered no practical diplomatic alternatives for change. Israelis thus have no choice but to adopt Netanyahu's fatalistic approach, according to which we shall forever live by the sword.

This acceptance of the way things are in the country and the lack of motivation to change them manifest themselves in other areas, not just in issues of diplomacy and defense. They are also typical of the attitude toward corruption, which indirectly and directly affects the well-being of each and every citizen. The protest slogan “We are sick of corrupt officials,” which led to the 1977 downfall of Mapai after 29 consecutive years in power, is a distant memory. Fewer than 8,000 people turned out the night of Nov. 7 for nationwide demonstrations to protest the government's plan for the ​distribution of resources and benefits from the country's natural gas reserves. What happened to the 500,000 citizens who protested in the summer of 2011 to demand social justice?

On the road to approval of the natural gas blueprint — which essentially takes a precious natural resource that belongs to the public and hands it over to the businessman Yitzhak Tshuva and the Texas-based firm Noble Energy — Netanyahu removed Economy Minister Aryeh Deri, after he refused to override anti-trust regulations and sign the gas deal outline. This enabled the prime minister to complete the manipulative process that began with the ouster of the anti-trust regulator, David Gilo, on the pretext that the gas regulation issue was defense related. As part of the deal with Deri, who was convicted in 1999 of bribery and fraud, Netanyahu upgraded the Ministry for the Development of the Negev and the Galilee, which Deri now heads, and added to Deri's portfolio responsibility for the so-called periphery, a term that has become popular in Israeli public discourse in recent years.

The prime minister also gave Deri a bonus — a special budget of 300 million Israeli shekels ($78 million). One must add to this public expenditure the amount of money each Israeli household could have saved had the government decided to control the price of natural gas. Where are the thousands of young people who hung out for weeks on end in 2011 in tents on Tel Aviv's Rothschild Boulevard to protest the exorbitant cost of living?

Israelis are also being gouged for telephone landlines because of another monopoly. This fate was not preordained. Rather, it is the result of blatant meddling by Netanyahu through his position as communications minister. Former Communications Minister Gilad Erdan, on Nov. 18, 2014, his last day in office before resigning, signed a regulation requiring the monopolistic Bezeq to sell its landline services to competing firms at a regulated cost in a move designed to reduce the price of phone and Internet services. After taking over the communications portfolio, Netanyahu's first move was to oust its director general, Avi Berger, who had fought against the Bezeq monopoly, and replace him with a yes-man, Shlomo Filber. In an Oct. 29 investigative report in the Haaretz weekend supplement, reporter Gidi Weitz describes how the popular Walla website has become a reflection of Yisrael Hayom, the pro-Netanyahu daily. Walla is owned by Bezeq, which is controlled by businessman Shaul Elovitch, who is waging a battle against reforms in landline services.

The Weitz report recounts how Walla CEO Ilan Yeshu'a told the site's journalists, “Netanyahu is ruining the country. I take anti-nausea pills when I ask this of you, but I have no choice but to take down the top story, to add an item. It is being dictated from above. I have no choice. There are big moves afoot. We must not get in the way.” In no uncertain terms, Yeshu'a also said, “We do indeed have big cash reserves, but we also have many interests. There's lots of crony capitalism involved, orders from high up.” On occasion, senior editors would simply tell reporters that Elovitch himself had ordered that the prime minister be defended. This scandal, too, evaporated, among the reports of the lynching of Habtom Zerhom, a migrant worker from Eritrea who was mistakenly suspected of perpetrating a terror attack, and newsbreaks about stabbing incidents.

Corruption follows corruption. Former Likud Knesset member Michael Gorlovsky was arrested on suspicion of accepting a bribe to the fantastic tune of 33 million Israeli shekels ($8 million) from the National Roads Company. In addition, the police announced that they were recommending that prosecutors indict former Deputy Interior Minister Faina Kirschenbaum and former Tourism Minister Stas Misezhnikov, both of Yisrael Beitenu, for allegedly running a well-oiled machine of public fund transfers to various agencies in return for bribes.

The Zionist Camp has also been marching in the corruption parade. On Oct. 27, Attorney General Yehuda Weinstein announced the decision to try Binyamin “Fuad” Ben-Eliezer, former defense minister and Labor Party (now Zionist Camp) chairman, on charges of taking bribes, money laundering and other activities. This is a man who was a heartbeat away from being elected state president.

Despite the never-ending revelations of corruption, the citizens of Israel are still able to discern those leaders who embody integrity. Regardless of his strong ideological advocacy, President Reuven “Ruvi” Rivlin remains an appreciated figure by Israelis on the left, center and right, a man of integrity and a zealous democrat, as was another figure from Israel's cleaner past, Yitzhak Navon, the former president who died Nov. 7.