Citing a sense of urgency to try to stop the Syria killing, arch rivals Iran and Saudi Arabia join 17 nations in a call to bring the Syrian parties into talks for a political transition, cease-fires and UN-monitored elections. 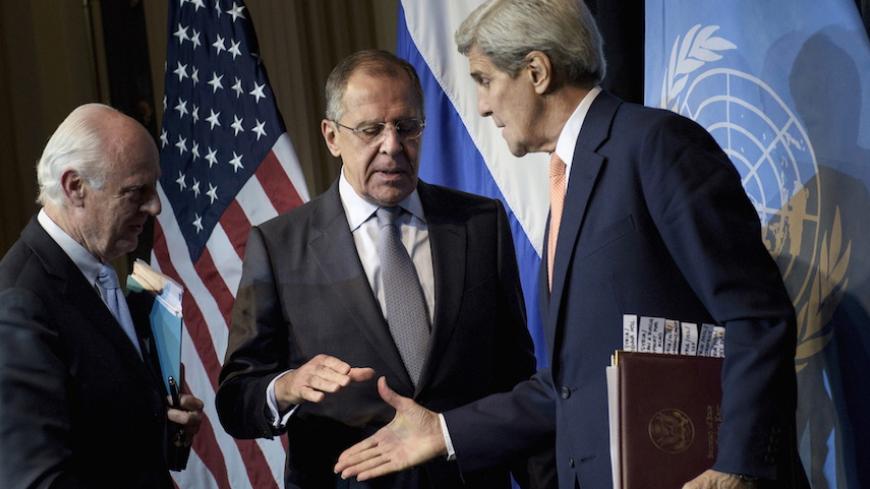 VIENNA — Foreign ministers from 17 nations, including those arming opposing sides in Syria’s civil war, were able to reach several points of agreement after seven hours of difficult talks here that included arch rivals Iran and Saudi Arabia for the first time.

But stark disagreements, including over whether Syria’s Bashar al-Assad should be allowed to stand in any new elections, remain unresolved, the ministers acknowledged, and plans to include Syrian government and opposition representatives in future rounds of talks, in as early as two weeks, are likely to make the diplomatic path ahead even more difficult.

“I believe the diplomatic situation is today more promising because all the stakeholders came to this table” for the first time, US Secretary of State John Kerry told journalists Oct. 30 at a rare joint press conference with Russian Foreign Minister Sergey Lavrov and UN Special Envoy for Syria Staffan de Mistura, after the all-day talks.

“There were tough conversations today,” Kerry said. But the “foreign ministers who came here today [did so] with the conviction that the fighting and the killing absolutely has to end. And it’s up to us to try to find a way to do that.”

Iran’s Deputy Foreign Minister for Arab and African Affairs Hossein Amir-Abdollahian, speaking to Al-Monitor after the Oct. 30 talks, said they were “hard,” but noted the parties were able to find some areas of agreement.

“We stressed there are two points that are most important about Syria: first, combating terrorism, and second, a political process,” Amir-Abdollahian said. Unresolved in the talks today, he said, was the issue of Assad’s future.

Russia’s Lavrov similarly said it was up to the Syrian people if Assad gets voted out.

Despite the long-standing arguments over Assad’s future, de Mistura suggested he was encouraged by the breakthrough in getting Saudi Arabia and Iran to the same table for the first time, and suggested it would help advance progress toward ending the Syrian conflict.

“Would you have imagined a few weeks ago that we would have been able to have what Secretary-General Ban Ki-moon has been asking for months, that Russia and the United States, Iran, and Saudi Arabia, and many other countries are involved in this conflict in one form or the other, sitting on the same table?” de Mistura told the news conference. “In the meeting of seven hours, no one left the room, no one disagreed fundamentally on major issues.”

Calling the parties assembled in Vienna Oct. 30 “the special contact group for peace in Syria,” de Mistura said they had “come to quite a convergence on concrete deliverables,” in particular in their joint call to explore potential opportunities for expanding cease-fires in Syria and humanitarian aid access.

“The Syrian people need to hear that,” de Mistura said. “At the end of the day, [combating] terrorism is a priority, but it can only be won and defeated if there is a parallel political process.”

The “special Syria contact group” nations plan to meet again within the next two weeks, and the UN is working to convene the Syrian parties to talks.

“We will be back,” Lavrov, speaking in mock “Terminator"-Arnold Schwarzenegger tones, told the news conference in English, after having delivered the rest of his remarks in Russian.