UNHCR head: It's time for Europe to get its act together

Outgoing UN High Commissioner for Refugees Antonio Guterres says it's urgent to find a political solution to the war in Syria. 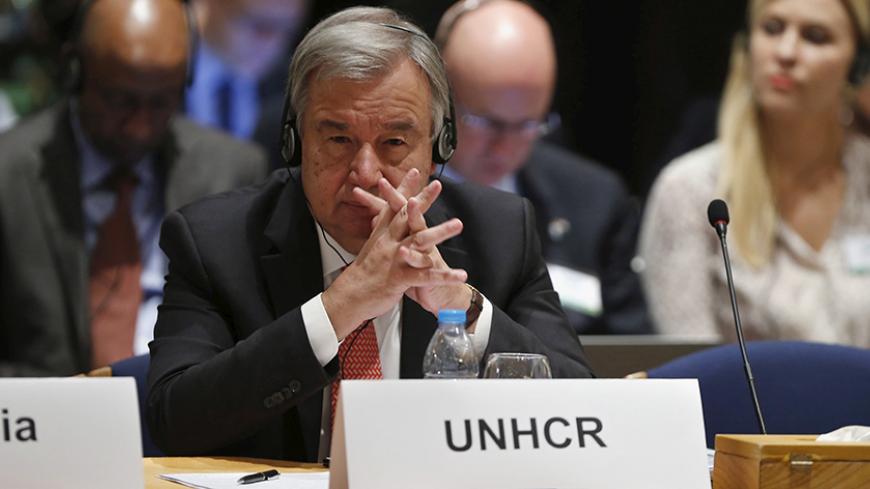 WASHINGTON — Outgoing UN High Commissioner for Refugees Antonio Guterres made an impassioned plea Oct. 27 for a political resolution to the Syrian civil war that includes key stakeholders Russia and Iran, and he expressed fears about the imminent disappearance of most Christians from the Middle East.

Speaking at the National Press Club, Guterres — a former Portuguese prime minister — also harshly criticized the European Union for its failure to respond effectively to the exodus of asylum seekers, primarily from Syria.

Noting that the EU countries have a total population of 550 million and that those seeking refuge there this year number about 700,000, Guterres said, “We are talking of a problem that could be managed … but what happened was total chaos.” Europe, he said, "has to [get] its act together."

Only last weekend did the EU decide to build capacity in Greece to handle the onslaught entering Europe from Turkey and try to stem the disorganized transit of refugees through Eastern Europe to Germany and Scandinavia. That influx, Guterres acknowledged, has created a backlash in some countries and contributed to anti-Muslim sentiment, which, he said, has its roots in the inadequate integration of Muslims in Europe in the post-colonial era.

Some Europeans, he said, have “a sense of false identity related to a reality that is no longer possible. … Diversity is the essence of society.” He added, “All societies are becoming multicultural … and that is a good thing.”

However, Guterres warned that multiculturalism in the Middle East is rapidly becoming a thing of the past as Christians flee the region that gave birth to their religion. The group that calls itself the Islamic State has targeted Christians in Iraq and Syria, and others are escaping the fighting in general and the economic hardship it has caused.

Noting that Christians in the Middle East were holding deep theocratic conversations at a time when people in his native Portugal were still “worshipping trees and rocks,” Guterres said that as a Christian himself, “To see these communities at risk of being eradicated is something I view with horror.”

He appealed to the international community to do “everything possible to keep these communities from being religiously cleansed.” That would “amputate the DNA of Christianity and … the Middle East,” he said.

Guterres, who leaves office this year after a decade in the key UN post, said the record numbers of people fleeing their homelands or internally displaced — nearly 60 million, the most since World War II — has overcome the international community’s capacity to respond.

More than 11 million are Syrians — 4 million outside the country and more than 7 million who have lost their original homes but remain inside Syria.

While there has been some increase in financial contributions recently to help these refugees, the latest UN appeal for $171 million for Syria this winter is not fully funded, and additional assistance is needed both to reach those in need inside the country and the tens of thousands of Syrian refugees in Lebanon, Jordan, Egypt and Turkey.

Guterres called for a “quantum leap” in international development aid to Lebanon and Jordan to enable them to cope with the refugee influx. In many of these countries, he noted, children are not being educated and there is no employment for dangerously idle young men.

The No. 1 priority, Guterres said, is a political solution to the Syrian civil war. He called for “all those countries with influence on the conflict to come together” to end a war he said has become a grave threat to global peace and security.

“It is suicide to let this war go on,” Guterres said. “Are these countries ready to understand that they have more to lose than to win in maintaining the status quo?”

He listed the United States, Russia, Saudi Arabia, Turkey and Iran as essential participants in peace talks. While foreign ministers from the first four met last week in Europe, the Saudis have refused to sit down with the Iranians, demanding that they first withdraw military support from the regime of Syrian President Bashar al-Assad. The Obama administration, however, announced Oct. 27 that Iran would be invited to the next round of multilateral talks in Vienna on Oct. 29. It was not clear if Iran would accept or, if it does, whether the Saudis would be in the room with the Iranians.

The refugee crisis has grown worse since Russia began bombing Syria in September in support of Assad’s forces in Homs and near Aleppo. Asked about this by Al-Monitor, Guterres did not criticize the government of President Vladimir Putin, saying only, “It is obvious for me that Russia is a key element in the solution that is required.”

Guterres also called for countries around the world to accept more Syrian refugees, noting that Brazil has recently offered to take 20,000.

The United States has accepted only 2,000 Syrian refugees so far out of a total of 70,000 refugees resettled here each year.

The Obama administration has promised to increase those numbers to 10,000 and 85,000, respectively, in the fiscal year ending next October. But concerns about allowing possible terrorists into the country are a factor in a prolonged vetting process that can take up to two years between an individual being referred for resettlement and actually arriving in the United States.

Guterres criticized the notion that terrorists could take advantage of the refugee resettlement process to infiltrate the United States. “The most stupid thing would be to apply for resettlement in the US,” he said, given the level of scrutiny and background checks.

As for Europe, Guterres said would-be terrorists “will fly … they will come in a much more comfortable way” rather than risk their lives in the hands of human smugglers on rubber dinghies and on long treks through the European countryside.