While the United States has taken only 1,500 Syrian refugees so far, Americans moved by the drowning death of a Syrian toddler and other scenes of misery among migrants are opening their wallets and contributing more to aid agencies. 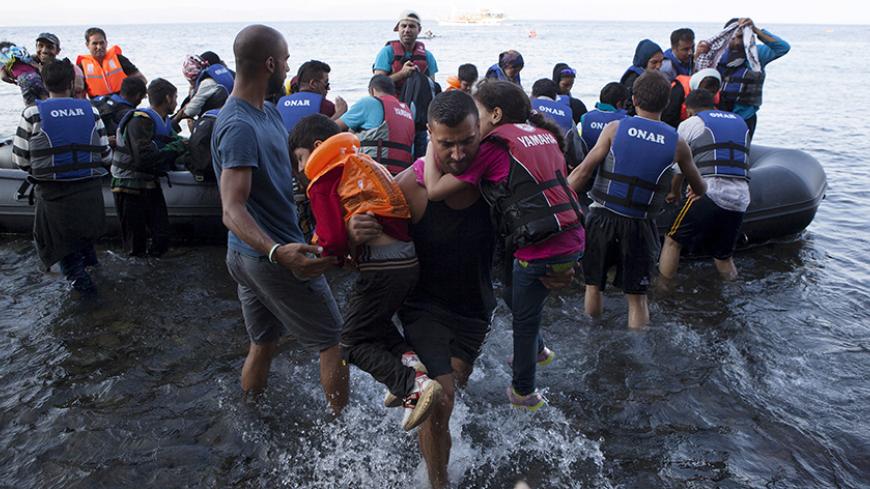 A Syrian refugee carries two children moments after arriving on a dinghy on the Greek island of Lesbos, Sept. 8, 2015. - REUTERS/Dimitris Michalakis

The senior US official in charge of dealing with refugees says the Barack Obama administration is watching the flood of Middle Eastern migrants into Europe with concern and will do what it can to help, but it is unlikely that the United States will admit larger numbers of Syrians anytime soon.

Anne Richard, assistant secretary of state for population, refugees and migration, told Al-Monitor in an interview Sept. 8 that the United States is continuing to process Syrians and other would-be refugees according to a lengthy and stringent process that emphasizes weeding out those who could pose possible security threats to the United States.

“The days of airlifts [of refugees] to Guam and Fort Dix, N.J., ended on Sept. 11, 2001,” Richard said, referring to the increase in US scrutiny of foreigners that followed the attacks on the World Trade Center and Pentagon by al-Qaeda.

At the same time, Richard said, the United States “as the world leader in response to humanitarian crises [is] of course focused on what is happening in Europe” and is “in constant contact with counterparts over there. There is great interest in the Obama administration to do everything we can to be helpful.”

European countries are bearing the brunt of the latest onslaught of tens of thousands of Syrians, Iraqis and others fleeing conflicts in the Middle East and South Asia. Germany has offered to take the largest number of migrants for resettlement, but many are struggling to make the journey across the sea from Turkey and through nations with less hospitable governments such as Hungary. In the region, Turkey is hosting the largest number, followed by Lebanon and Jordan; the countries are struggling to accommodate those already there.

Number of Refugees Taken In

Even before the current exodus, some Democratic members of the US Congress urged the United States to take 65,000 Syrians for permanent resettlement here this year. But Richard told Al-Monitor that only 1,500 have come so far and that 1,800 registered Syrian refugees will have gained admittance to the United States by the end of this month. Another 17,000 have been referred to the United States for admission over the next few years.

Even as some Americans have urged the Obama administration to take more, others have cautioned against inadvertently admitting potential terrorists.

Rep. Michael McCaul, R-Texas, chairman of the Committee on Homeland Security, has raised concerns about the possible admission of individuals who might become fighters for Islamic extremist groups.

Stewart Patrick, director of the program on International Institutions and Global Governance at the Council on Foreign Relations, told Al-Monitor that the United States should expedite admission of Syrians. “The notion that somehow this is going to be a jihadi pipeline is overwrought fearmongering,” he said.

Patrick also suggested the US Navy might be authorized to participate in efforts to rescue migrants who pay smugglers enormous sums to gain access to unsafe vessels for the crossing between Turkey and Greek islands or between Libya and Italy.

The photograph of a 3-year-old boy, Aylan Kurdi, who drowned along with his brother and mother during such a crossing has galvanized world opinion about the crisis, as have images of thousands of migrants penned in behind barbed wire or streaming on foot through Hungary toward Austria and Germany.

While the latter two countries have offered to take massive numbers of migrants, some European countries have been less welcoming and wealthy Persian Gulf nations such as Saudi Arabia have taken none.

The United States has an annual quota of 70,000 refugees from all over the world. Richard, in a prior interview with Al-Monitor, noted that the procedures for vetting Syrians are particularly tough. She said that it can take 18 months to two years between a referral for resettlement in the United States — typically by the UN High Commissioner for Refugees (UNHCR) — and the refugee actually landing in the United States.

UNHCR and other UN and nongovernmental organizations dealing with the 60 million people worldwide who are refugees or internally displaced — numbers not seen since World War II — are struggling to cope and running out of money to provide basic services. A UN appeal for nearly $20 billion for 2015 is only a third funded even though the year is almost over. More than a dozen conflicts that have erupted or re-erupted in the past five years are largely responsible; some of these conflicts — in particular the civil wars in Syria and Iraq — appear far from resolution.

Aid workers say it is not clear whether the latest wave of migrants are coming directly from war-torn countries or are fleeing nations such as Turkey, Jordan and Lebanon that have given shelter to the bulk of the refugees since the Syrian conflict erupted in 2011.

Christina Tobias-Nahi, director of public affairs and institutional funding for Islamic Relief USA, told Al-Monitor that she believed many of those seeking sanctuary in Europe are coming from refugee camps in Turkey and elsewhere and that the timing reflects both a sense of desperation on the part of the refugees and a desire to see their children receive proper education.

“The conditions are getting worse and worse [in the camps],” Tobias-Nahi said. “The kids are not in school. Families want to get their kids in school. Education is a big factor.”

Christine Nyirjesy Bragale, director of media relations for Mercy Corps, blamed the lack of a political solution to the wars for the latest crisis. The war in “Syria has been dragging on for 4½, almost five years,” she told Al-Monitor. “There’s not even the hint of a peace process.”

She said the latest migrants are coming from “Turkey, Jordan, Lebanon and Syria. They see Europe as a place where they can receive services, get an education and work.”

One problem aid agencies have faced is that individual donors tend to contribute more for relief of natural disasters than man-made ones. Nyirjesy Bragale noted that Mercy Corps had raised $11 million in two months after a devastating earthquake earlier this year in Nepal but barely $4 million for Syria in 3½ years.

The sudden attention that the migrant crisis is getting now may help ameliorate that at least for a while. Islamic Relief USA has raised half a million dollars in just the last four days, Tobias-Nahi told Al-Monitor, while Mercy Corps has received $465,000, Nyirjesy Bragale said, since the picture of Aylan Kurdi’s body appeared in the international press.

“There is no question that Aylan will have saved lives and helped make other lives easier,” she added. His death “has been a galvanizing moment for people around the world and particularly for the American public.”